Home » Guantanamo Voices is Comics Journalism at its Most Transparent

Sarah Mirk plumps for a curious creative choice with Guantanamo Voices. In the back pages of the comic, she explains that she purposefully instructed her contributing artists to adhere to a ‘sunset tones’ colour palette, in an effort to give the horrific accounts of her interviewees an engaging appearance for the reader. Guantanamo Voices does indeed look the part. The colouring throughout the eleven comics is unified in its warm splendour, whilst the individual qualities of the strips themselves easily stands out with every turn of the page. All of this then is hugely at odds with the actual stories these comics are telling. Guantanamo Voices consists of numerous real accounts from former prisoners, workers, lawyers and more who became entangled in the horrendous prison, all of which tell a story of a corrupt, racist system that unfairly punishes the wrong people.

None of the accounts feel forced, contrived or filtered. The greatest strengths of Guantanamo Voices is how it portrays an honest and unflinching account of the prison. Remaining active through three Presidencies (so far…), the message is routinely and clearly stated how Guantanamo is a law unto itself, that the majority of inmates aren’t charged with an actual crime, and that it stands as a symbol of racially-driven fear and scapegoating to a general population left reeling from the events of 9/11.

This is due to the interviewees’ candidness and the artist’s striking a balance between being sensitive and being forthright with the interviewees’ accounts, all handled with expert editorial care by Sarah, a contributing editor of the political comics publication The Nib. One of the stand-out strips from issue #6 of The Nib was Caged Voices by Mansoor Adayfi and Kane Lynch, detailing Adayfi’s perspective of visiting animals giving his time at Guantanamo some ray of light. Guantanamo Voices features an edited version of Adayfi and Lynch’s strip, enhancing the idea that this book feels like a natural extension of that single strip. 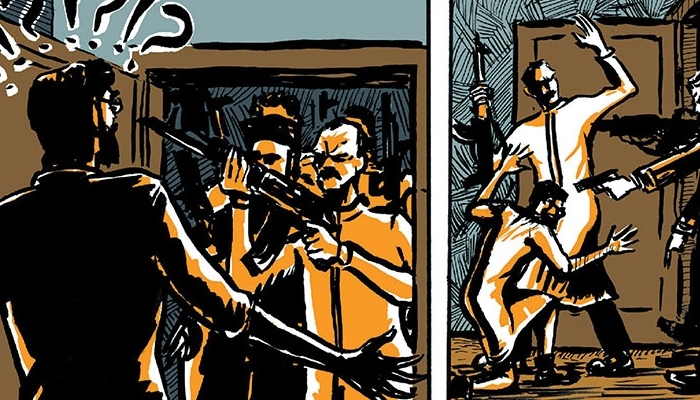 Their strip personifies the warm visual aesthetic of Guantanamo Voices. For such a threatening subject matter, it looks totally harmless. Warm and inviting, in fact. Lynch’s cartoonish art coupled with the pleasant colours that are spread across Guanatamo Voices creates a disarming atmosphere, the frightful subject matter brought on by the interviewees creating a clash of dynamics. The handsome appearance of Guantanamo Voices doesn’t in anyway scupper its overall message. The artists treats the interviewees with sincerity, ensuring that their accounts aren’t smothered in any form. If anything, the colours help to make the comic more digestible, even when the art becomes more riotous in other chapters.

Omar Khouri’s depiction of Moazzam Begg’s account of being captured in the middle of the night from his home and his family, tortured at Guantanamo, but only to be released without being charged with a crime, is visually electrifying. Grimy, dark colours suit the oppressive mood Khouri translates Begg’s gruesome story into. On the opposite end, Chelsea Saunders’ illustration of Katie Taylor’s sobering and heartbreaking account of attempting to lend an empathetic hand to inmates through her role as the coordinator for the Life After Guantanamo project is much softer and restrained in its visual tone.

Accounts such as Taylor’s highlight another all-too forgotten aspect of Guantanamo; the difficulties faced by those attempting to adjust to life after their complicated imprisonment show that the impact of Guantanamo is lifelong. The effects of Guantanamo don’t simply stop once prisoners are released. This is the full and varied picture of the prison that Guantanamo Voices portrays. The events that laid the foundation for the prison’s usage post-9/11 and its grim notoriety, along with the social, political and psychological impact it’s had on its inmates, the people who work there and the countries it’s supposedly serving are all laid in transparent detail by Sarah, her team of illustrators and her diverse array of interviewees.

Sarah brings an informed, astute, empathetic and progressive perspective to Guantanamo Voices. It can be argued that the former workers of the prison who she interviews were complicit in enabling the horrors of Guantanamo, yet a shared theme that arises from these professionals is how they eventually realised how unjust the extreme interrogation and capturing tactics used in the name of Guantanamo are. Including their voices alongside actual former prisoners and those who attempt to help prisoners in finding peace after their experiences, all illuminated through some exquisite art and colour, gives Guantanamo Voices a gentle yet strong legitimacy. It’s a comic that’s designed to draw you in with its artwork, yet make you stay with its complex, harrowing yet vital stories.

You can discover more about Guantanamo Voices from Abrams Books. Will you be reading this title? Let us know in the comments section below or send us a Tweet!