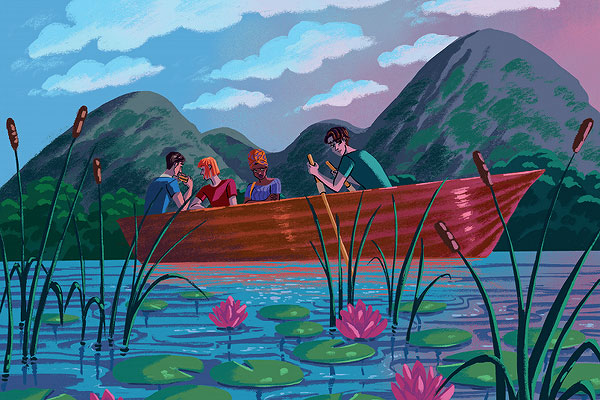 What many #BlackLivesMatter allies often forget to discuss is racism outside of just violence. Yes, that in itself is a very big part of it and we should not discount it in any way. But what makes racism such a prevalent presence is our continued tolerance for microaggression. What We Don’t Talk About by Charlot Kristensen puts at the forefront this very issue in a delicate but extremely realistic manner. She reminds us that we are worth more than the prejudice people use to define us.

With the nuance of her art and incredibly alarming writing, Kristensen highlights key issues within biracial relationship dynamics. We meet Farai, a black woman of Zimbabwean descent. Farai has been together for two years with her boyfriend Adam. The graphic novel recounts Farai’s first meeting with Adam’s parents. Surprised by their extremely hostile demeanor towards her, Farai feels cornered and intimidated throughout her time with them. As the verbal abuse grows increasingly confrontational, she finally speaks up and walks away.

The writing starts off very soft and expository. Every piece of new information is threaded neatly into the opening conversations. We can see Adam and Farai’s shy but teasing romance through their interactions; the little touches, the sarcastic banter, the way he’s comfortable sleeping in front of her. These context clues give the readers a lot to to invest in despite only a few pages of actual dialogue. The main crux of the story comes as they arrive at Adam’s family home.

The writing introduces conflict through the use of irony. Even before we meet Adam’s parents, we are already clued in that something is not quite right. After two years of being together, he has yet to introduce his girlfriend to his parents. Prior to this revelation, we witness a conversation between Farai and her mother on the phone. They talk about Adam, and Farai insists that Adam is the right person this time around. The irony is present right at the very start of the novel. 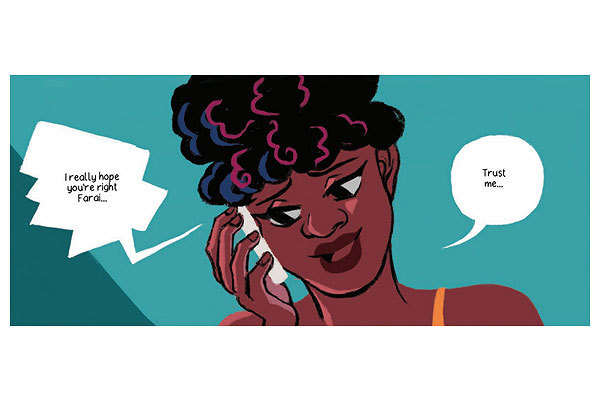 What We Don’t Talk About uses irony to also touch on microaggression through Martha’s interactions with Farai. She berates Farai, insisting that she as the mother would know her son better than the girlfriend. In the same scene, she generalizes all the different cultures within Africa as “all quite the same”. When Farai tries to correct her, she vehemently denies Farai’s efforts. Martha’s own ignorance to her hypocrisy is telling of her intolerance.

Microaggression is normalized through the use of dialogue. Words like “funny,” “strange,” “accent,” “interesting” and “terrorists” are a constant in Martha and Charles’ vocabulary when describing minorities. While diminutive and degrading, this is a very realistic occurrence in everyday life and conversations. This escalates further when Farai tries to confront Adam. He responds by calling her “sensitive” and “overreacting”. He silences her, brushes off every real problem she raises with an affectionate touch.

The art complements the writing very well. While a typical aesthetic, it does preserve just enough of its own personality to really stand out. The little details I appreciate are the way the features are drawn. You don’t just differentiate the characters because of their skin color. Their features are a mark of their own individuality; Farai’s big brown eyes and sharp lashes, Adam’s pointed nose and thick eyebrows.

Mannerisms are also important factors that help in character building and defining. This is something Kirstensen expresses very well through the art. Adam’s mannerisms, his wink, the way he rubs the back of his neck, these are the make of Adam’s character. Each page we get to know just a little bit more about him. As the story progresses, we get to see even more of these mannerisms alongside the root of it all.

The art makes use of color to help with world-building. Colors valiantly inscribe personality into the characters. In Farai’s case, her room is painted pastel with pink accents. She is often seen wearing yellow clothing. These colors become her identifiers. Whereas Adam’s room is all neutral colors, plain shadings filled with wooden tones. This indicates a restriction of creativity and self-expression. 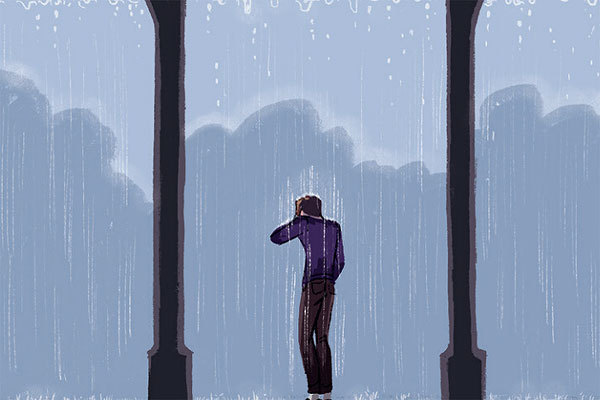 Background scenes use solid color rather than gradient. This helps the characters standout. The storytelling focuses more on the little things that the characters do rather than their surroundings. Take for example the image above. Despite the overt pathetic fallacy, Adam’s figure is the centerpiece of the scene; his posture, his soaking wet clothes, all of these indicate his desperation to catch-up with Farai, and his realization of his own inaction.

The most promising use of art and color is in the transition from conflict to conflict. Kristensen uses images of inanimate items such as coffee, a head wrap, a glass of wine – simple little everyday things – against solid color backgrounds instead of title cards. These items move the plot forward, and show that in racism, the smallest things can become the biggest of deals.

Neither art nor writing are separate entities; they work and flow together as one. The art helps the storytelling, using colors, shadows, and mannerisms to present specific emotions. The writing juxtaposes alongside it to give voice and tone, enriching the overall experience. You’re not just reading and seeing it on a page, you’re watching it unfold. Even in most mainstream comics, this is a difficult feat to uphold.

What We Don’t Talk About is a brilliant example of how to tackle serious issues with the attention to detail they deserve. Kristensen does not oversimplify, nor does she exaggerate. The events that unfold are grounded in reality which doubles their impact. But the main highlight is the way emotions are portrayed through writing and art. Realistic situations in fiction are only as effective as the emotions and reactions they catalyze. Kristensen achieves seamlessly this balance of creating internal struggles while still teaching much-needed lessons. 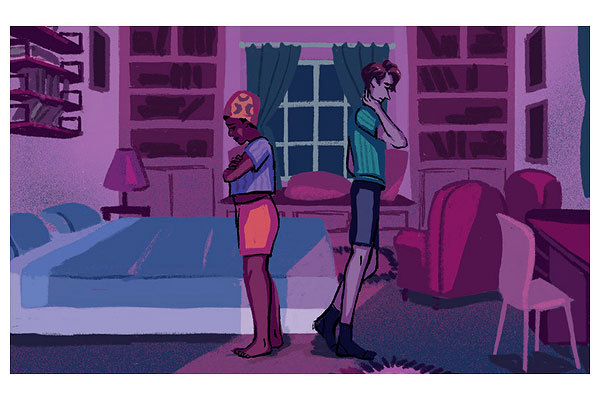 Want to read the story of Farai for yourself? You can find What We Don’t Talk About at Avery Hill Publishing, available to purchase in shops on August 12 (UK) and September 9 (USA). If you enjoy, comment down below your thoughts or let us know on Facebook or Twitter!