Throughout Mikel, Judith Vanistendael‘s artwork leaps out at you. It’s like a sketchbook brought vividly to life. The scrambling approach to panel structure and lettering gives the impression of a story in loose, fluid motion, as if an abundance of events are happening all at once. Mikel‘s events span several years, yet there’s a constant sense of chaos at work, an unpredictable energy in this absorbing character study from Vanistendael and writer Mark Bellido, on who the comic is partially based.

This semi-autobiography sees Bellido drawing on inspiration from his life as a bodyguard, painting a personal yet somehow universal story set during 2006-2010 in Spain. The titular Mikel leads a slovenly life with vague aspirations of being a writer, yet ups his family to the Basque Country to take a bodyguard job defending politicians against the separationist group ETA to further financially support his family. Bellido spends much of Mikel humanising this wasteful sloth of a man, charting the gradual failure of Mikel’s role as a father and a husband as this new and dangerous lifestyle consumes him.

The social unrest that plays like a backdrop throughout Mikel gives the comic a quiet rhythm in its pace. The political uprisings, the assassinations and the bloodshed is presented as being so entirely commonplace, to the point where it’s reassuring. Mikel achieves the stability he left his previous life for, but at the expense of losing his loved ones. Vanistendael’s sprawling artwork gives Bellido’s highly personal story a buoyant depth and energy, making this lengthily, sombre story appear spontaneous in its delivery. 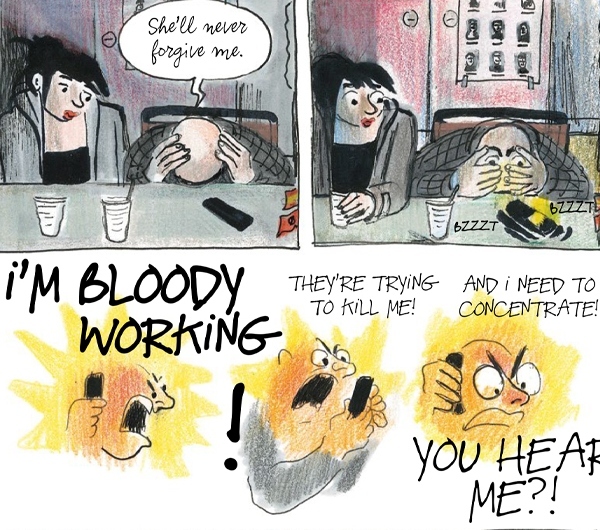 Vanistendael often makes Bellido’s narrative explode with power, as panels collapse and lettering bleeds into each other during the more dramatic moments of the comic, but Mikel is at its most effective when this exaggerated appearance is juxtaposed by quieter scenes, almost devoid of dialogue. It’s in these contemplative moments when Mikel embraces a more experimental form, as Mikel himself adjusts to but also questions and grows angry at the life he’s succumbed to.

The vagueness with which Mikel unfolds won’t appeal to everyone. There’s no core story at work, but rather, a capturing of endless minute, seemingly inconsequential moments that congeal together to create a linear emotional and mental descent for Mikel. His personal and professional life collide together until one isn’t recognisable from the other, culminating in questions of identity in a world that forbids him from having one. Vanistendael and Bellido succeed in bringing this surreal, fast-moving, absorbing thriller to life in crisp, peculiar fashion.

You can discover more about Mikel from SelfMadeHero. Have you already enjoyed the comic? Let us know in the comments section below or send us a Tweet!