Sneaky Goblins, René Pfitzner’s action-packed debut graphic novel, is a delightfully fast-paced fantasy story for all ages. It’s about Dank, a young goblin determined to prove his worth, and the adventures he gets himself into. The whimsical artwork and near-constant excitement make for a story that entertains from start to finish.

The story begins when Dank is kicked out of a college for assassins after failing a practical exam. Unsure what to do next, he responds to a job posting—and finds himself on a quest to steal an Elven treasure. Along the way, Dank meets two vibrant companions: a ukulele-strumming orc, and a badass human wizard. The three of them encounter increasingly interesting obstacles—bears, ogres, sorcerer-guards, even dinosaurs, to name a few.

The world of Sneaky Goblins is wonderfully original. The story takes place among a remarkably well-developed set of kingdoms ruling in precarious peace. Each panel features a beautiful gradient background that lends a magical air to every moment. To Dungeons & Dragons fans, though, the world is both fresh and familiar. The characters’ mythical races—goblin, orc, human, elf—match those available for D&D players to choose. So, too, do their specialties, or as D&D players know them, classes. Dank acts like a typical D&D rogue (though with a particularly excellent backstory) and Sonya a classic wizard. Bog, on the other hand, is a rarer barbarian-bard multiclass (a bard-barian, perhaps?).

Many other features of the world also more or less follow the rules of D&D. The similarities never detract from the story, however, and in some cases they even enhance it. A few times, the characters seem to get out of scrapes with surprising ease. With the rules of D&D in place, though, these moments don’t feel like lazy writing or plot holes. They’re just the result of a lucky dice roll. (Dank in particular seems to have his rogue expertise in persuasion.)

The somewhat D&D-esque world helps the magic system as well. It saves us the trouble of having to slog through exposition about how magic works. Instead, we can focus on the beautiful, original way the magic is drawn. Instead of inventing words, Pfitzner invents runes, each one color-coded to match the character casting it. Colored text boxes containing a footnote translation of the runes accompany each spell. The result is at once mystical, yet elegant and accessible.

In an otherwise wonderfully crafted story, a single scene doesn’t quite measure up. As he attempts to cross the mountains, Dank reaches a checkpoint. A thought bubble appears below Dank’s head: “FASCIST HUMANS! There’s no way AROUND!” Why Pfitzner felt the need to include “fascists” is unclear. Perhaps he wanted to justify a fight against humans. Perhaps he wished to clarify his wannabe assassin character’s morality. Either way, he needn’t have bothered. Dank is a sweet young goblin just trying his best. It’s impossible not to root for him.

The inclusion of the fascists creates a further problem, though. If fascism exists in a world, so must the views that go along with it. One of those views is antisemitism, or hatred of Jews. And fantasy as a genre has historically been notorious for negative Jewish stereotyping—especially with goblins. Jewish-coded goblins are a common fantasy trope, from the Gringotts workers in Harry Potter to the so-called monstrous race from D&D. They’re greedy. They’re short. They have hooked noses. And they tend to work in banks. 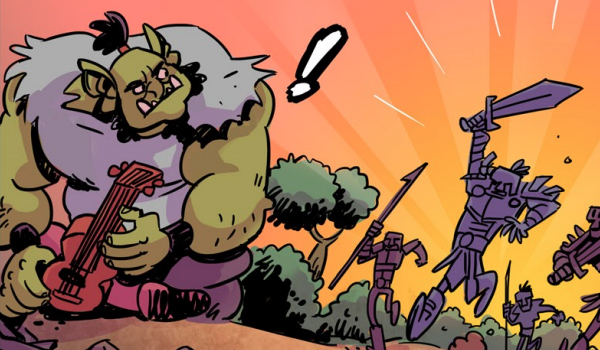 This is by no means an attempt to over-analyze Pfitzer’s intentions. The antisemitic portrayal of goblins often passes for mere fantasy lore, so that many authors and readers aren’t even aware of it. And Pfitzer’s goblins almost, almost manage to avoid this trope completely—no small feat, given its prevalence. Most of the goblins are friendly and loyal, with varied interests and appearances. If not for the fact that the goblins’ enemy appears to be the fascists, the depiction of goblins as mobsters—another frequent stereotype—would have gone unnoticed. Nothing about Sneaky Goblins seems intentionally hateful. It’s simply an example of a challenge posed by working in a genre which hasn’t historically treated everyone with respect.

On a lighter note, the plot structure is nothing short of masterful. Though the story at times feels rushed, the frequent, clever twists bring constant suspense. Pfitzner also makes brilliant use of converging subplots. In that sense, the graphic novel medium is perfect for the story. A D&D campaign, for example, would not allow for the complex parallel plot lines. Nor would it let the stunning art help tell the story.

As for the ending? No spoilers, but Pfitzner nailed it. It’s fitting and lighthearted. The loose threads are all tied up. The characters show satisfying development. And, maybe best of all, there’s an intriguing epilogue hinting at a welcome sequel.

You can read Sneaky Goblins here! Have you had a chance to read this glorious graphic novel? Let us know in the comments below or send us your thoughts on Twitter!