SelfMadeHero can always be relied upon to deliver enlightning biographies on topics and people that aren’t strictly obscure, but rather, things we simply wouldn’t have thought could have a biography. Commonplace, everyday things that otherwise have a far richer and varied history than we may presume. Paolo Bacilieri‘s FUN, the story of the crossword, and Box Brown‘s Tetris: The Games People Play are two such comics the publisher has put out over the last couple of years that shine a welcome light on niche subject matter, the people surrounding their creation and development and their cultural impact. Now, David Rault leads a talented team of artists to document the evolution of typography with ABC Of Typography.

ABC Of Typography merrily skips its way through eleven eras of the art form, from tracing how Western civilization began communicating through the written word 3,500 years ago in Mesopotamia to the contemporary abundance of font styles we have today. Rault handles the writing of the comic, whilst each chapter is drawn and coloured by a different artist, enabling each section to be enjoyably distinctive from each other. However, a firm editorial hand keeps the artistic direction of ABC Of Typography in check, ensuring that each section gracefully compliments the one that came before it, even when there’s plenty of gentle playfulness in integrating different styles and eras of lettering into the comic’s structure itself. 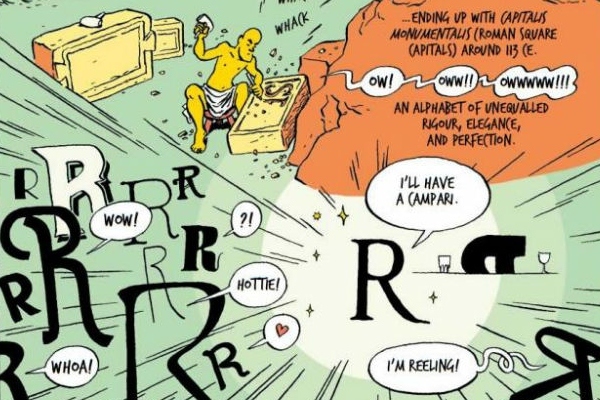 Visually, the chapters themselves shift between the formal and the exaggerated, with each artist striking up a core aesthetic that places their genre of typography into its respective eras. Singeon‘s artistic take on The Romans And Their Writing, the second chapter, has pleasingly warm colours and shapes to it, but also has great fun grappling with the Romans’ approach to the construction of letters. Olivier Deloye‘s Newspapers and Machines also gets creative with the art form, crafting an eye-catching approach as to how newspaper typefaces rapidly gained momentum when first used. Both of these chapters especially highlight the creativity lettering plays in the form and structure of a comic. Particular mentions should go then to Edward Gauvin and Txabi Jones for their translation of the book. Originally published in 2018, Gauvin handled the English translation whilst Jones handled the layout design.

Condensing such illustrious chunks of typography’s history into self-contained chapters, whilst bearing a well-paced flow, results in each era coming and going in a flash. Rault’s breezy, witty story-telling paints a welcome introductory picture of typography’s various eras, but rarely stretches any further than that – an introduction. ABC Of Typography then becomes a tamed riot of style over substance, which feels rather meta, given how its subject matter is all about style and yet has provided the foundation for communication for us for thousands of years.

ABC Of Typography reminds us that the things we take for granted and use in mundane activities everyday can have a long and unfinished history. To this day, fonts are still being invented. The ever-present rise in digital technology has typography alert and awaiting further development, which is evident in how the comic ends on a cliffhanger, with the words “To Be Continued” ending this particular volume. With its immaculate design and spirited approach to its subject matter, we can only hope that the second volume of ABC Of Typography is as gorgeously curated as this first volume.

You can discover more about ABC Of Typography from SelfMadeHero. Have you already enjoyed the comic? Let us know in the comments section below or send us a Tweet!