Home » The Mythology Behind Sailor Moon

Sailor Moon remains one of the most popular, loved, and influential of manga and anime across the world. Considered the staple magical girl anime, Sailor Moon has inspired many young women (and men), as well as commonly being seen as the anime that sparked major interest in the west for the Japanese animation industry. It has become a story of mythic proportions, but what actual myths and legends inspired the characters of Sailor Moon?

In this article, we’ll take a closer look at our favourite magical girl, exploring the stories behind the names and characters. A lot of Greco-Roman and Japanese mythology influenced Sailor Moon.

Let’s start with our heroine, Sailor Moon herself, named Usagi Tsukino, or Serena in the original American dub of the 1990s anime. She draws a lot of influence from both Asian and Greek mythology related to the Moon. Her name is a pun on “moon rabbit” (月のうさぎ  – Tsuki no usagi), a direct reference to the legend of the rabbit on the Moon. In Asian myths, dark markings on the Moon resemble a rabbit or hare. The rabbit is seen as pounding an elixir of immortal life with a mortar and pestle. In Japan, it is pounding the ingredients to make rice cakes. In Chinese mythology, the rabbit is a companion to Chang’e, the Moon goddess.

Usagi is the reincarnation of Princess Serenity of the Moon Kingdom. She fell in love with Prince Endymion of Earth, a forbidden romance that would doom the kingdom. Endymion would reincarnate into Usagi’s boyfriend Mamoru Chiba, aka Tuxedo Mask. Serenity is based on Selene, the Greek Titan of the Moon, who fell in love with the mortal Endymion. So entranced by his beauty, Selene would visit a sleeping Endymion every night to be with him.

The repeating tale of a moon goddess and her mortal lover are repeated throughout history. Chang’e is similar, becoming immortal and living on the Moon, separated from her husband Hou Yi, an archery god. Well, that would explain why Tuxedo Mask is so good at throwing roses at people.

Usagi may draw influence from The Tale of the Bamboo Cutter, a traditional Japanese folktale, adapted into Studio Ghibli’s film The Tale of the Princess Kaguya. A bamboo cutter and his wife discover a young girl within a bamboo shoot and adopt her. She grows up into a beautiful woman and sought by many men, including the Emperor himself. Kaguya is revealed to be a princess from the Moon, returning there in the end. The Emperor’s advances may have inspired the villain Prince Demand of the Black Moon, who obsessively loved Princess Serenity. 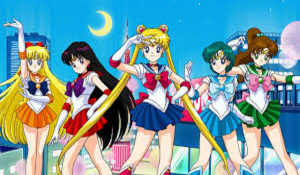 The other Sailor Scouts are named after our neighbourly planets. Each scout draws their power from their respective planets, but take inspiration from the Greco-Roman deities they are named after.

Sailor Mercury, Ami Mizumi, is named after the Roman messenger god. Ami strives to become a doctor like her mother. This relates to how Mercury wields a caduceus, incorrectly associated with the US healthcare system. Her strongest spell “Mercury Aqua Rhapsody” appears as a lyre, an instrument Mercury invented to appease his brother Apollo. Ami is the brains of the Sailor Scouts, referencing Mercury’s intelligence and knack for tactics. Ami is the first Sailor Scout to join Sailor Moon’s team, referencing how Mercury is the first planet in the solar system.

Sailor Mars, Rei Hino, is named after the Roman war god and the red planet. She has pyrokinesis and enhanced psychic powers, allowing her to sense danger. Fiery and passionate, Rei is titled as the Soldier of War. Her close friendship to Sailor Venus references the affair Mars had with love goddess Venus. Rei is accompanied by two crows, Phobos and Deimos, named after Mars’ moons, and mythical sons. They may reference Odin’s ravens Huginn and Muninn, who fly around the world and observe much,  referencing Rei’s psychic abilities.

Sailor Jupiter, Makoto Kino, is named after the Roman sky god, being very strong and has lightning-based powers. Both the most masculine and feminine of the Sailor Scouts, Makoto is a physical powerhouse, but enjoys cooking and gardening. Her height may reference Jupiter’s status as the largest planet. Her use of plants is a reference to how the Japanese word for Jupiter (木星) translates to “wood planet”. Jupiter’s grandmother Terra (or Gaia) is the definitive Mother Earth figure. Makoto can’t quite get over her ex-boyfriend, comparing other men to her beloved ‘senpai’. This alludes to Jupiter’s habit of sleeping with other women behind his wife Juno’s back.

Sailor Venus, Minako Ainu, is named after the Roman love goddess, and the second planet in our system. Minako is beautiful, all-loving, and strives to become a pop idol. She was the first Sailor Scout to awaken, referencing how Venus was the first of the Dii Consentes to be born. Minako’s status as a soldier of love and beauty references heavily to Venus’ domains. As said before, Rei and Minako are best friends, referencing Mars and Venus’ affair with each other.

Sailor Pluto, Setsuna Meioh, is the Guardian of the Time-Space Door, and keeps to herself. Pluto is based on the former ninth planet-turned-dwarf planet (*internally screams*) and the god of the underworld. The god Pluto was often separated from the other gods, guarding the underworld, just as Setsuna does, alone and isolated, yet content with her job.

Sailor Saturn, Hotaru Tomoe, is based on the Roman harvest god. She has frightening, destructive powers, annihilating the Moon Kingdom with one swing of her Silence Glaive, a giant sickle, which is Saturn’s symbol. In myth, Saturn devoured five of his children in fear that they would overthrow him. Jupiter indeed overthrew Saturn, freeing his siblings. In Sailor Moon, Sailors Pluto, Uranus, and Neptune fear Sailor Saturn, dreading that her powers will awaken to destroy Earth. Hotaru is unknowingly the host for an evil entity called Mistress 9, alluding somewhat to Saturn devouring his kids and fearing their escape. Of course, Sailor Saturn is a lot nicer and sympathetic that the cruel Titan.

Sailor Neptune, Michiru Kaioh, is based on the Roman sea god. Thus, she uses ocean-based attacks and possesses a degree of precognitive powers. She is deeply artistic, a talented violinist, and Haruka’s girlfriend. Michiru doesn’t have much in common with Neptune’s personality, though her flirtatious habits may draw from Neptune’s habit of having affairs with other women.

Sailor Uranus, Neptune, and Pluto wield weapons – the Space Sword, the Deep Aqua Mirror, and the Garnet Orb – which are based on the Imperial Regalia of Japan. These are the sword Kusanagi no Tsurugi, the mirror Yata no Kagami, and the jewel Yasakani no Magatama. They represent the virtues of valour, wisdom, and benevolence, ceremonially presented to the Emperor during his enthronement ceremony. Kusanagi was a sword acquired by the god Susanoo after slaying the Yamato no Orochi. Yata no Kamagi and Yasakani no Magatama were used to draw the depressed sun goddess Amaterasu out of a cave, after she had a falling out with Susanoo. 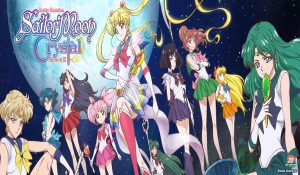 Sailor Moon has a large number of antagonists named after a specific theme. The villains of the Dark Kingdom are named after minerals: Queen Beryl, Jadeite, Nephrite, Zoisite, and Kunzite. This is continued with the Black Moon Clan, who are mostly named after gemstone – Prince Demand (diamond), his brother Saphir (diamond), Crimson Rubeus (ruby), and Green Esmerelda (emerald). The clan’s true leader, Wiseman, or Death Phantom, possesses Nemesis, the famed, long rumoured tenth planet of the Solar System. The mineral and metal name theming continues with the Death Busters, the Dead Moon Circus, and the Shadow Galactica.

Queen Nehelenia is named after an obscure Germanic goddess. She is likely inspired by the evil queen from Snow White, portrayed as a narcissistic ruler who was imprisoned within a mirror by Princess Serenity’s mother Queen Serenity. She seeks to conquer Earth by corrupting the land of Elysion. Its high priest Helios, named after the sun Titan, hid away from her by transforming into Pegasus. Elysion is based on Elysium, the afterlife chosen for great heroes and mortals in Greek mythology.

The ultimate evil in Sailor Moon is named Chaos, and its rival is Sailor Cosmos. These are entities are named after the first two beings in Greek mythology. They created the universe together, and all that came with it.

Which are your favourite characters of Sailor Moon? What other manga or comic book properties would like to see us explore? Leave a comment below or on our Twitter feed.