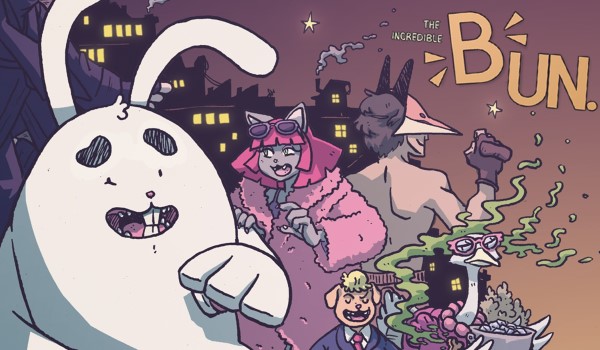 Boxing animals. The first thing that comes to mind is perhaps a kangaroo, since they are known for boxing in the wild. Well, imagine if those boxing kangaroos were competing in a league match with other kangaroos placing bets. In fact, imagine if not only kangaroos, but other animals, competed in matches. Imagine that those animals all functioned as a part of a society in which animals and humans coexisted in cities. That is exactly the case with the first two issues of Michael Sambrook, Rosie Packwood, Alexa Renee and Rob Jones‘ The Incredible Bun. It is an ugly duckling story of Bun, an extremely large bunny who leaves his family on a carrot farm to find his calling in the city. After a brief encounter on a train, he is pulled into the boxing ring by a boxing manager who just so happens to be a dog.

One of the most important aspects of a comic is the artwork. It allows a piece to have its own feel. It helps establish the tone, and in many cases can allow for various unique environments to be clearly portrayed. The art work of The Incredible Bun seems to combine the dynamic movement and extreme stylization of anime with the simple yet colorful and complex panels of a more traditional western newspaper comic. This blend created an experience that was completely new to me as a comic reader. It was such a breath of fresh air from the art styles that I am used to in DC comics or Marvel comics.

The art style of The Incredible Bun goes hand in hand with the humor and the visual gags that are present throughout the first two chapters of the series. I chuckled with every single pun about a show in the comic’s universe that was just slightly different from one in ours (i.e. The Big Bunny Bake-Off). The jokes cement the reader into the world of the comic, and it emphasizes how similar yet different Bun’s world is from ours. I particularly liked one moment that was a clear homage to the late great Muhammad Ali. Biggman, Bun’s manager/trainer, says in the second chapter “Float like an apple pie and string like a tree”, which was a surprisingly fun gag and made me chuckle for at least a minute.

Every story has its ups and downs, and this one is chock full of ups. I have really only one small, extremely tiny fret since the story was so enjoyable. I just really wanted to meet the narrator. It’s not really a valid criticism that I have. It is more an anticipation that has been built up that hasn’t been paid off yet, which I am super duper excited for. The Incredible Bun is a fun, unique, and heartfelt story for the whole family that is full of creative and effective jokes that create a really enjoyable experience for all.

If you would like to purchase the comic, it can be found at https://www.madiuscomics.co.uk/shop. What did you think of The Incredible Bun? Did you pick up on all of the clever puns and gags? Sound off in the comments or send us your thoughts on Facebook or Twitter!