Home » Why Superhero Marketing Works So Well: How Marvel Uses Social Media For Its Success 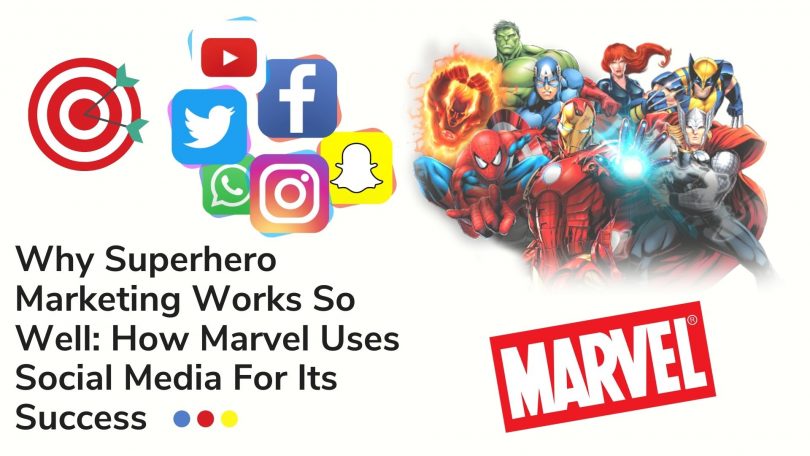 Marvel Studio is one of the most successful corporations in the movie industry. That is because they always use the latest trends of marketing in their strategy. Promotion through social media is a big chunk of efforts that the company puts on to widen the audience. Their main goal is to grow your interest in the upcoming film with Instagram photo likes. In this article you will see the methods that the marketers of Marvel are using to advertise their movies and characters.

For every character that appears in the franchise there is an account that is regularly updated by the team of marketers, using footage created with the actor who performs the role. The ultimate goal of this action is to engage with the public and keep up the viewership. Generally the accounts were created on Facebook, to have more options for interaction with the audience. For example, on Facebook was launched a big campaign dedicated to Captain America: Civil War. The general idea of it was that users were supposed to choose between two teams – Red and Blue. By creating two camps of fans, the company achieved rising results with:

With these instruments, Marvel created noise around the franchise, thus the rates of the movie jumped sky high.

Fun fact: initially, the third camp was created. It is called “Team Bucky”, and mostly consists of the Winter Soldier (or the impersonating actor – Sebastian Stan) fans. They are mostly neutral in discussions between two other teams, yet they still add profit to the company, due to their wish to popularize the character.

Socially Meaningful Topics As A Leverage For Engaging The Public

In recent years social media are becoming a platform for discussing many serious problems, including racism and gender discrimination. Many big companies are using the fuss around such subjects for their purposes. Marvel is not an exclusion from this statement, but the methods that they use are pleasingly delicate. One good example is the promotion campaign for Black Panther.

The release of this movie coincided with the first wave of BLM movements and rise of interest to the problematic of colored people quota in the whole industry. The movie is based on African culture. So the smartest and most logical decision was to cast the absolute majority of black people, and, what is the most important, to spill this information all over social media. The gender matters are supported with the main three top departments heads being women. The result of this accenting in social media was the increased loyalty of the potential viewers long before the film was actually shown in theaters. Also one of the prominent topics in this movie is the national identity of the character, which is  a great theme to speculate on too.

A significant promotion twist for Black Panther was happening on Twitter. The fund-raiser was created, that had a purpose to earn money for minors who couldn’t afford to visit the cinema for the premiere. Many celebrities and popular influencers were participating this event with the hashtag #TheBlackPantherchallenge and the overall fund was around $40000. The money was used as it was proclaimed, but the main campaign result on Twitter was obvious – gaining more and more loyalty from future viewers.

Marvel Studios uses Instagram very much, as it helps to connect with a younger audience, and concentrate on the visual content (which is what they do really well). Mostly, all the campaigns were duplicated on all the platforms, but some of them, like 3D-content for the new Spider-Man franchise, were specific to Instagram. Also, the possibility to make the biggest accent on the visual content, e.g. posters, backstages, bloopers and insights to the future movies, was helping to create the intrigue and make fans go bananas in the comment section, when discussing the theories about the scenario.

Marvel releases movies about superheroes who were popular long before technological progress allowed them to shoot these stunning blockbusters. Such superheroes as: X-Men, and Iron Man, also, Hulk, Thor and, of course, Captain America and many others were existing at first as the heroes of comic books. What Marvel studio does very well is the visual effects. So no wonder that they use primarily YouTube to attract viewers and keep them engaged long before the movies are released. It is no secret that there is a schedule of Marvel movies, so the content for their official channel on YouTube will not end for the long time from now. On their YouTube Marvel Studio accumulates all the power of their fanbase. The main categories of content, that hooks up their viewers, are:

Thanks to the big variety of the interesting superheroes, Marvel also created a bunch of more narrow-themed playlists, like Women of Marvel, Earth’s Mightiest Show, and others.

Marvel Studio uses a very wide and thorough tactic, and it’s ultimate goal is to keep the viewers engaged all the time, even when there are no movies going on in theaters. Also, the company is using its influence to attract more attention to the personalities of the franchises that have ended by now. The secret of the evergreen topics for exploiting is the very fact that they make movies about superheroes. Their personalities were very interesting to people before the era of blockbusters. So now the company is cultivating the system that was already existing. The beloved heroes are eternal, and social media are simply a new adaptation for connection with the audience. For example, not so long ago in USA happened a very interesting incident:

The six-year old boy named Bridger Walker had selflessly protected his younger sister from the attacking dog. As a result, the child had to get 90 stitches on his body. His aunt made a post on Instagram, that encouraged people to tag his favorite Marvel heroes and their impersonations. The hashtag was launched, and the company reacted with the permission for the boy to visit the backstage of the future movies. Also, these calls to action got to the famous actors, like Robert Downey Jr., Tom Holland, and Chris Evans. All of them called Bridger and praised him a hero, and Chris Evans even sent his Captain America’s shield to the boy. Now social media are making the story viral, and fanart that appears online, pictures little Bridger as Cap himself.