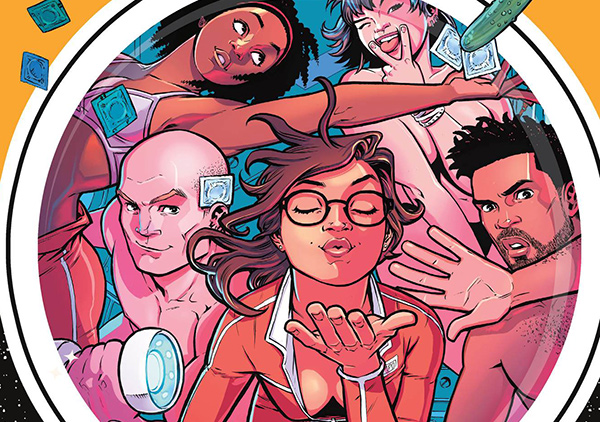 The first volume of the series was released earlier this year by Vault Comics, collecting the first 5 issues. Money Shot is written by Tim Seeley and Sarah Beattie, with art by Rebekah Isaacs, colours by Kurt Michael Russell, and lettered by CRANK!. All these guys are clearly at the top of their game; the comic looks brilliant and the writing sucks you in from the start. The main thrust (pun intended) of the story centres on a group of 5 scientists-cum-pornstars (their pun, not mine) who decide to fund their space exploration research project by making porn. The  Triple X-plorers not only have sex with each other, but also a variety of aliens, all live-streamed straight back to Earth.

This montage in particular – of everyone having sex in different pairs – was one of the highlights of the book for me. The sex is mostly skipped over and instead, we see the aftermath; the characters open up emotionally rather than just opening up. It provides the opportunity for character development without it being shoved down your throat. It gives more depth to these characters, making them more than sexy scientists doing sexy things with sexy aliens.

Okay, so let’s talk about the sex. There’s a lot of it – I’d say at least two couplings per issue. But, as previously mentioned, it’s softcore at best and always makes sense within the context of the story. It isn’t dumb or forced or just done for the sake of it. Isaacs is quite creative in the artwork for these scenes; framing things in a way to give it the feel of sexiness without being over-the-top.

For instance, one of my favourite splash pages (no pun intended) shows two of our human Triple X-plorers in a three-way with a blue alien tentacle monster. It’s easily one of the sexiest panels in the book, but everyone’s…parts…are cleverly hidden or shadowed. Isaacs clearly understands that it’s all about what you don’t show rather than giving up the game right from the off.

You can get the first volume of Money Shot over at the Vault Store or read the first issue for free. If you enjoy, comment down below your thoughts or let us know on Facebook or Twitter!