Home » The Black Adam Movie Trailer: Is Black Adam A Hero or A Villain? 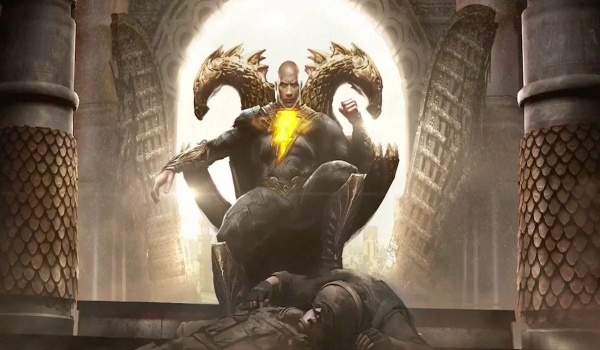 During DC FanDome on August 22nd, a brand new movie was announced for Black Adam, an antihero who was once bestowed the power of Shazam. The character was originally supposed to appear in the Shazam! movie back in 2019, but instead the villain of the film was Dr. Thaddeus Sivana. Now, almost as if it’s compensation, Black Adam will be getting his own spinoff film that explores his origins and his place in the DC cinematic universe. He’ll be portrayed by none other than Dwayne “The Rock” Johnson, so we can already expect a powerful and gripping performance.

The trailer revealed during DC FanDome, while short, reveals a lot about what we can expect from the movie. It’s clear that we’re being set up to believe that Black Adam is a villain. The dark, edgy music, the Rock’s monologue about being unjustly imprisoned, and the ending shot with the Rock sitting upon a throne with bodies at his feet, promising that “no one will ever stop [him] again”. It’s a recipe for a vengeful villain, and a powerful one at that.

But we’re being mislead here. Sure, Black Adam is a villain, but we shouldn’t forget that he was once the champion of Shazam. The early part of the trailer reveals that, five thousand years ago, he was a citizen of the fictional city of Kahndaq. Kahndaq was a beautiful place, full of magic, varying cultures, and economic prosperity. Yet beneath the surface, there were those who had fallen to the lowest economic status, those who had nothing to their names. According to the trailer, Black Adam was one of the lower status citizens, being portrayed with chains around his body as other men stand around him, clearly mocking him and ready to beat him into submission with whips and swords. He comes from poor and ruinous beginnings, and his past sets the stage for what he will become – and what he will choose to fight for.

Black Adam became the champion of the wizard Shazam, and with the power he’d been granted, he claimed himself to be the hero of Kahndaq, “doing what needed to be done”. In this part of the trailer, the Rock’s monologue takes on a hint of self reflection. He believed that Kahndaq needed a hero, one that would change the world for the better, but he says that instead of a hero, “they got me”. He acknowledges this side of his character openly, which leads to some rather interesting points: is he aware that he is the villain of the story? Does he still believe that what he did was necessary AND right? Whatever ended up happening in his time as Shazam’s chosen, he was ultimately locked away for his actions, and only five thousand years later would he return to the world.

His actions back in Kahndaq were, in theory, based in a place of virtue. Black Adam wanted to fight for people like him, people who had nothing but the clothes on their backs. Despite all its praise and beauty, the city was corrupt with power, and Black Adam wished to fight against it. But perhaps Shazam’s power corrupted him into thinking he could accomplish more, or perhaps Black Adam fought the system in a way that put too many lives at risk. With his mindset, it’s easy to see how he thinks he’s a hero. Does that mean he WAS a hero, though? That depends on interpretation.

Whatever the case, the trailer seems to indicate that Black Adam still thinks he is in the right, five thousand years later. It’s implied that he still harbors hatred for those who imprisoned him, but aside from that, his new motives aren’t entirely clear. I’m hoping to see him adjust to the modern era and see that the same injustices he fought five thousand years ago are still relevant in our time, pushing him to continue fighting for what he believes in. As he still has Shazam’s power, he could easily wreak havoc on the unjust and corrupt people in modern society. It’s the method in which he fights that will determine if he’s actually a hero or a villain—and, based on the trailer—it seems that he’ll turn out to be more of a villain. At the very least, he’ll be a compelling antihero.

Black Adam is set to release on December 22nd, 2021. It’ll star Dwayne “The Rock” Johnson as the token character, but nothing else is known about the rest of the cast or the plot.

What are your predictions for the Black Adam movie? Do you think Black Adam will be portrayed more as a hero, a villain, or an antihero? Sound off in the comments or send us your thoughts on Twitter!