Thompson Heller: Detective Interstellar comes from an extremely complimentary line-up of talent. Written by Milton Lawson, drawn by Dave Chisholm and coloured by Fabian Cobos, with lettering by Damon Kane, the comic sees the creative minds behind Earworm and Canopus join creative forces. Both of those comics presented smart, witty sci-fi concepts, beautifully executed with some stunning artwork and colours. Now, Lawson and Chisholm collate their talents into the enjoyably irreverent yet thematically muddled Thompson Heller: Detective Interstellar, a three-issue miniseries that bursts with an incalculable number of manic ideas, but struggles to pull them into a cohesive package.

Working against the comic is its format. Each of the three issues of this sci-fi crime saga functions as a self-contained story, with some scattered character development on the titular detective’s part and his romantic interest linking the three stories together. It’s a testament to Lawson’s story-telling capabilities that each premise feels entirely deserving of its own series, rather than being segregated into a single issue each.

Thompson Heller: Detective Interstellar wears its politics firmly on its sleeve. Issue #1 sees Heller employed to investigate why the leader of a group of ocean activists on the planet Kepler-6927E turns into a murderer. Issue #2 tangles with artificial life rights in a war between robots and humans. Issue #3 climaxes the series with a disdainful look at corporate entity trafficking lifeforms to use their body parts for capitalist exploitation. If nothing else, Thompson Heller: Detective Interstellar boasts some delectable concepts that feel freshly picked from the sci-fi playbook. 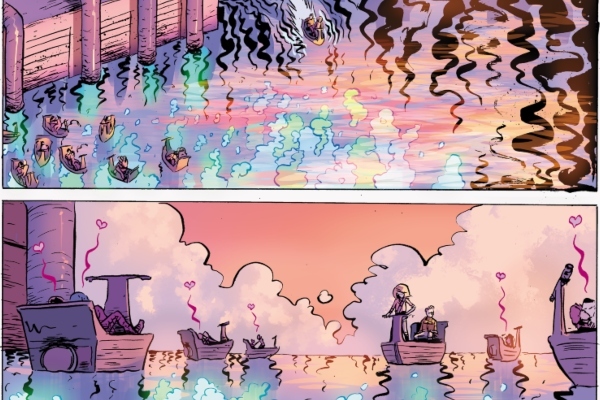 Bringing these wild ideas to life is Chisholm and Cobos’ exuberant, reckless art. Chisholm uses a looser, less formal style of line art than he made use of in Canopus, which lends the characters and worlds of the comic a ragged, offbeat atmosphere that suits the playful attitude of the comic. Cobos’ warm, appealing colours gives each issue its own unique visual stamp. Both the art and the colours weld in harmony to make the comic’s world-building bright, amusing and inviting to watch. Kane’s lettering straddles between being strict and reckless. Whilst speech bubbles are crafted in a stern, rigid manner, the sound effects pop with colour and shape.

The core complication of Thompson Heller: Detective Interstellar is the abundence of concepts forced to share such a confined space. Throughout this comic, Heller uncovers robotic conspiracies, pilots alien sharks in invisible rivers and exposes betrayal within climate activists. There’s simply too much going on. It’s difficult to become fully engrossed in each story when it lasts for such little page lengths. That’s less of a comment on the comic’s creative team. We know fully well how talented they all are. It’s more of a comment on how traditional, linear crime/mystery stories don’t function that effectively within a single issue. At around 30 pages, three individual scenarios have to be set up, explored and resolved. Allowing themselves a longer format would have helped the scenarios and characters of Thompson Heller: Detective Interstellar to feel less rushed and gain a more natural flow.

In issue #2 for example, we open with Heller mourning the death of a robotic friend that forms the basis of his second adventure, but it’s awkward for the reader to be empathetic in Heller’s grief when their relationship is delivered through blocks of exposition, rather than being able to actually show their relationship. It’s another symptom of the comic’s single issue form. Maintaining the comic’s otherwise amusingly frivilous energy is Chisholm and Cobos’ frenetic visuals. Coupled with Milton’s imaginative, socially conscious world-building, there’s plenty of visual momentum to give Thompson Heller: Detective Interstellar a raucous attitude.

There’s a great sci-fi detective story somewhere in Thompson Heller: Detective Interstellar, but there’s just too many elements scrambling to be seen to make the comic paint a complete and satisfying picture. The comic ends up flirting with its own ideas rather than fully embracing them. As a fun, rapid-fire space crime thriller, Thompson Heller: Detective Interstellar is perfectly serviceable, but with its eye-catching visuals and invigorating concepts trapped in a haphazard execution, it falls short.

Thompson Heller: Detective Interstellar will be published by Source Point Press and Comics Experience in October. You can discover more about the comic from Lawson’s website. Will you be joining Thompson Heller in investigating the strangest crimes in the galaxy? Let us know in the comments section below or send us a Tweet!