Home » Are the Studio Ghibli Films Set in the Same Universe? 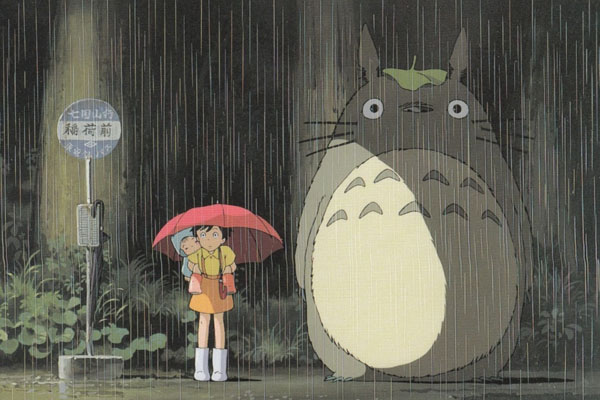 The animated masterpieces of Studio Ghibli weave intricate stories of love, environmentalism, and the fruitlessness of warfare. Like many films and franchises, they attract a large amount of fan theorising. There is the time honoured theory that every film from the studio may be set in the same universe. Studio Ghibli put easter eggs into their films, thought not as prominently as say Disney or Pixar. Still, these cameos and background details have inspired conversations that the films are interconnected. The studio’s films do carry a noticeable greater story, one of the relationship between humans, spirits, animals, and the environment.

There is no concrete evidence that all the films exist in the same world, though minor characters do cross over. For example, the soot sprites who appear in the first act of My Neighbor Totoro, later appear in Spirited Away. The demonic force in Princess Mononoke is theorised to be the same evil worm-like spirit that appears in Spirited Away and Howl’s Moving Castle, used by Yubaba and the Witch of the Waste.

The connection between nature and spirits is very important to the studio’s storytelling. Common themes include mankind’s creativity being used for warfare (The Wind Rises and Castle in the Sky), or environmentalist destruction (Pom Poko and Princess Mononoke). Hayao Miyazaki and the late Isao Takahata aimed to inspire thought and discussion to preserve and respect the balance with nature.

Timelines have been created that play out a hypothetical grand narrative about man’s relationship with the spirits and nature. It usually begins with Princess Mononoke and ends with Nausicaä of the Valley of the Wind, deliberate choices that act as book ends to each other.

Princess Mononoke has a teetering balance between nature and mankind, culminating in the death of the Forest Spirit. Gods and spirits slowly withdraw from the human world. By the time of Nausicaä, civilization has been obliterated in the Seven Days of Fire, caused by gigantic warriors implied to be manmade. The technology from Laputa, the titular setting of Castle in the Sky, is suggested to be the origin for the warriors.

Interestingly, the fox-squirrel creatures from Nausicaä also appear in Castle in the Sky. One thousand years later, the Toxic Jungle has taken over much of the world, filled with gigantic insects. By the end of the film, the protagonist Nausicaä is able to re-establish the equality between man and nature through an act of self-sacrifice.

Magic plays a large role in several of films, including Kiki’s Delivery Service, Howl’s Moving Castle, Spirited Away, and Tales From Earthsea. The latter appears to take place in its own world, where the power and knowledge of a name can be a strong form of magic. This is also featured in both Spirited Away and Howl. Kiki involves witches being in the public conscious, and they can lose their magic if in a state of emotional distress. Porco Rosso, titular character of the 1992 film, has been cursed to transform into a pig for unknown reasons. The rules of magic vary per film, and if they were all set in the same universe, the presence of witches would likely be more common knowledge.

Now, if a hypothetical timeline where all of the films existed together, how would that play out?

Well, realistically, it probably wouldn’t work based on all the different and clashing rules. Magic exists openly in some films, remains secretive in others, or doesn’t exist at all. Can a historical period film like From Up on Poppy Hill exist in the same world as Kiki’s Delivery Service, or Howl’s Moving Castle? It might be even feasible that the films are in separate timelines (ala The Legend of Zelda).

In fact, that is the direction we will take. Most of them are set in an urban fantasy world where magic and spirits exist. This would count as our first timeline. The second has a more fantastical setting, where magic and steampunk technology play a large part in society. The likes of Castle in the Sky, Howl’s Moving Castle, and Kiki’s Delivery Service would fit into the second timeline.

Certain films don’t necessarily fit into either one of these timelines. Tales From Earthsea exists in its own world, though it could be slotted into the second timeline. Ocean Waves, the studio’s lone TV movie, features a Porco Rosso film poster, so it could occur in our world. My Neighbors the Yamadas has a very different art style and sense of comedy, presented as an anthology. It doesn’t quite fit with the other films.

As for the first timeline, it would likely begin with The Tale of the Princess Kaguya, based on a popular Japanese folk tale, which dates as far back as the 8th century. Following that is Princess Mononoke, set in the Muromachi period in Japan (1336-1573). Gods and spirits are still commonplace here, but are slowly being hunted by mankind. The film culminates in the death of the Forest Spirit, though the spirits still dwell in forests, cut off from mankind.

The Wind Rises would technically be next, since its story begins in 1918, stretching out to 1945. It is a fictitious biopic of Japanese aircraft designer Jiro Horikoshi, following his life and career in the build up to World War II. However, Porco Rosso takes place in the 1930s. The lone element of magic present here is Porco’s curse that turned him into a pig, though we never learn the origin. Grave of the Fireflies occurs in 1945, revealing that humans can transform into spirits themselves, able to relive their past as memories.

Next is My Neighbor Totoro, taking place in 1958 rural Japan. Totoro, the Catbus, and other spirits befriend Satsuki and Mei Kusakabe, implying spirits can be seen by children. The spirits have their own community, and continue to manipulate nature. The ending implies Satsuki and Mei forget their adventures as they grow older. In Spirited Away, Chihiro appears to forget her experiences in the spirit world as well.

From Up on Poppy Hill is set in Yokohama 1963, prepping up for the 1964 Olympics, dealing with the aftermath of WWII and the Korean War. Only Yesterday follows the past and present of Taeko Okajimi; her childhood in 1965, and her adulthood in 1982. At the same time in 1965, Pom Poko begins, with the tanuki trying to stop the creation of New Tama. Their efforts continue long into the 1990s, where they eventually lose, integrating into the human world.

Whisper of the Heart takes place in New Tama in 1995, featuring characters who appear in the semi-sequel The Cat Returns. That film is actually implied to be a story written by Whisper of the Heart’s protagonist Shizuku Tsukishima. Spirited Away follows in 2001, featuring Chihiro’s journey into the spirit world. Haku is revealed to be the spirit of an urbanised river, and another river spirit appears in a disgustingly polluted state.

Ponyo comes next in 2008, where the balance between nature and humanity is at its most imbalanced. Well, that is until Ponyo causes complete havoc in the ecosystem, though her relationship with Sosuke seems to fix things. Ponyo’s mother Gran Mamare seems to be one of the few active spirits that interact with the human world.

How the Borrowers from Arrietty fit into the bigger puzzle is a mystery. The species seem to be on the verge of extinction, or at least rare. The film occurs in 2010 in the Tokyo neighbourhood Koganei. Rounding up the timeline is When Marnie Was There occurring in 2014.

Some time in the far future, mankind is wiped out by their creations, the Giant Warriors, in the Seven Days of Fire. A thousand years later, much of the world is either desert, or covered in the Toxic Jungle. This leads to the events of Nausicaä, where the balance between humanity and nature are finally restored.

The second timeline is much smaller, consisting of Castle in the Sky, Howl’s Moving Castle, and Kiki’s Delivery Service. Other films with magic, such as Ponyo, and even Nausicaä could take place in this timeline as well. As mentioned earlier, the magic-based technology from Laputa is suggested to be origin/inspiration for the giant warriors. The giant insects, the Ohm, possess a degree of magic, able to resurrect Nausicaä. Since magic is tied closely to nature in the Studio Ghibli films, this further cements the resolution of the world’s balance.

Of course, all of this is both purely hypothetical and for fun. It is a hoot to come up with such ideas, offering brand new ways to appreciate the works of Studio Ghibli!

Do you think Studio Ghibli’s films are set in the same world? Which are your favourites? Leave a comment below, or on our Twitter feed!