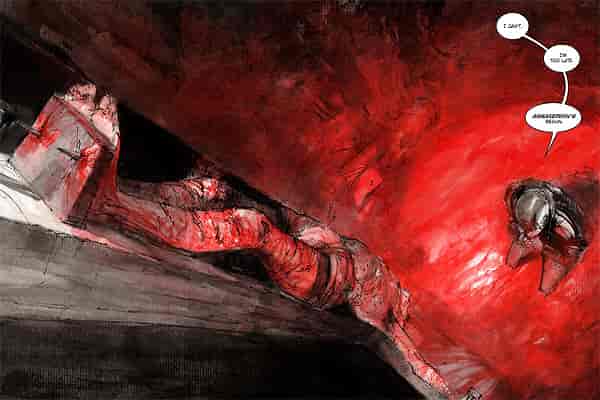 What happens when Catholic ideology crosses with a murder? That is what this graphic novel intends to find out. A murder mystery met with a cautionary fable; Man of Sin investigates Catholic faith amidst the tangled web of betrayal and crime.

Written by Andrew Guilde with art from Camilo Ponce, it follows Damien Nero, a man struggling to cope with the murder of his son. After a fateful encounter, he is given an ultimatum: stay alive for twenty-four hours, and he’ll learn the identity of the man who took his son. That is, if he can survive the day. This then leads to a series of heinous encounters, ones that teach him that even his loved ones can be swayed to betrayal. It reminds us that this is just how powerful faith in religion can be.

This graphic novel is a perfect pick for horror junkies. Packed with action and family drama, Man of Sin stands as a biblical parable set in the modern world. It features all the metaphors and lessons of a bible story; figures from heaven and hell alike appear in the comic; characters such as Jude, Isis, Jonai, and Raphael may ring a bell. It also exploits clashes of prayer and combat, faith and fear, and concludes with the question of whether or not faith in a higher power can really save you.

Man of Sin also incorporates several overlapping timelines. This provides deeper insight to the aftermath of Jordan’s murder, and allows for expansive world-building. The comic’s profound appeal comes through it’s allegorical and complicated narrative. Though fascinating, it does sometimes fail to distinguish what is happening when, leading to some occasional confusion from the reader.

As a comic, it features a monochromatic color scheme punctuated with swathes of fiery red. The amount of detail in character illustrations can vary, ranging from hyper realistic portraits to sketch line work. That inconsistency can make it difficult to tell what a character’s expression and emotion may be in a given scene. And, as a fair warning, violence is also very prominent throughout the graphic novel.

For fanatics of the supernatural and devotees to the darker sides of Christian mythos, may Man of Sin find its way into your hands! You can download the first issue for free here. Issues #1-#4 are available on Comixology. If you like it, be sure to sound off in the comments or send us your thoughts on Facebook or Twitter!