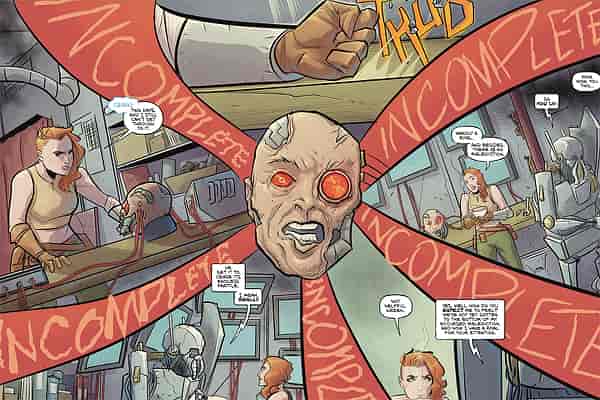 Vault Comics’ Engineward #2 picks up where #1 left off, continuing the story several days later. The first issue hooked me in with its gorgeous art, fascinating future-fantasy setting, and likable characters. This issue continues all of the above, still providing impressive worldbuilding. But this time, it focuses more on the religious and political aspects of life for the characters. These next two issues make for a double-feature that was hard to put down.

We get a lot more of Joss these issues. She continues to be exceedingly likable and charming. Her active and determined nature consistently keeps the narrative moving forward. There is also the discovery of an ancient ghoulem head in the wastelands outside the village. This opens new and exciting mysteries for Joss and Ichabod as tensions build and shift.

We see more of the relationship between the villagers and the mysterious celestials – with a few new ones this time around. It’s keeping up with the established zodiac theme convention, alongside fantastic and standout designs. These next two issues highlight the contrast between the village and celestial lifestyles, adding more to the already captivating mystery. Although it has a lot to establish, it still finds time to sit the characters down and let them interact. This allows a natural transition into exposition, and reveals a greater scope into the story and characters.

The narrative continues to tease the threat of the mysterious shades. But this is just mostly through dialogue. We do get a little taste of an abduction earlier on. Yet once again, it is mostly in passing conversation amongst the other characters. With all the other adventures and intrigue that we can actually see, this plot thread feels a little underdeveloped. I’m hoping that later issues will tie this hook into the others in a satisfying and focused manner.

In the third issue, things really get moving. After the much-needed set-up, our main cast is solidified and the quest is made clear. The heroes and antagonists alike begin to make their moves. This issue makes two things very apparent to me; Engineward has great pacing, and it’s only getting better with each installment. There is more to see of Kreek, perhaps the sweetest robotic companion I’ve seen in recent memory. We also get to know Thrycia, a level-headed, kindhearted, and determined scavenger.

The art and color in these issues are just as crisp and pretty to look at as before. The artists draw focus across the page and highlight important moments. Lines delivered with intensity are written in red; when the celestials are making decrees, their speech bubbles and font resemble a script on a scroll of parchment; at one point, the panels of an entire page are separated by text blocks of a robotic warning alarm. These details add so much! It polishes the overall quality of the series, and enrich the storytelling of the world.

Once again, it’s impressive how entertaining it is to simply watch these characters interact and live in this world. There is basically no action in either issue – though I hardly noticed it, nor cared. The first issue may have opened with a monster battle, but the series seems to be focusing more on its setting, characters, and lore. This, I think, is actually a much more interesting shift.

Want to continue reading the adventures of Engineward? If so, the second and third issues can be purchased now at Comixology. Engineward #4–#6 are also available to order there now. If you haven’t read it yet, check out our review of #1 and tell us what you think in the comments or send us your thoughts on Facebook or Twitter!