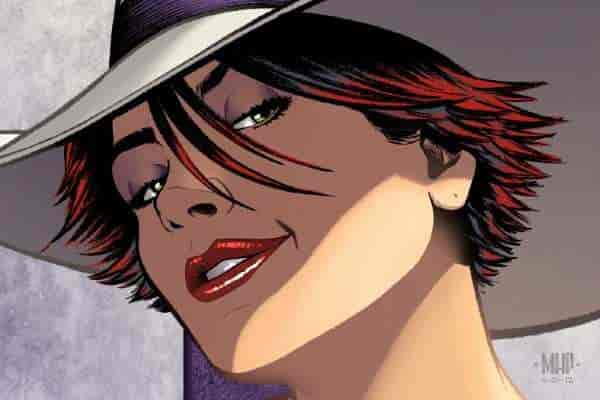 The first issue of Recovery Incorporated – “Another Day at the Office” – introduces us to Mia, a mysterious heroine and thief with all the gadgets of super-spy. As she abseils around a skyscraper and breaks into a penthouse, we learn that she in fact hates stealing; she’s far from your regular thief.

The comic’s opening is all conveyed through Mia’s point of view. Mia’s inner monologue narrates the first passages of the comic. More than anything this gives us insights into the hero of the story which Michael Penick and Dean Deckard will by writing. They tease Mia’s backstory gradually, with just a few teases in the opening so we empathise with her quickly as the action begins.

Mia’s introduction sets the pace for the comic and its action sequences. It starts slow, the burglary: Mia takes her time and explains her process, and then the issue quickly picks up speed again as it moves into a dramatic escape and chase scene across the Hong Kong city streets.

The story becomes higher-concept and larger in scale as it goes. Mia is as much a super-spy as she is a super-thief! Mia’s outfitted with James Bond-type gear. From insulating fabric that reverses a Taser’s charge to an automatic motorbike that revs once she’s nearby. And that’s just in the first few pages.

The opening sequence of “Another Day at the Office” is all really to introduce us to Mia’s character. There’s no real dialogue for the first eight pages. Instead, the text of the comic – which is really what sets its pace – is limited to Mia’s monologue and Penick’s creative lettering. Especially in ‘silent’ sequences when Mia is sneaking through the penthouse, our only diegetic company are these sound effects to set the scene. It’s varied and balanced with Mia’s monologue, maintaining a sense of speed and urgency even when her narration ends.

Penick’s art also centres almost every panel around Mia. Her perspective or actions direct the layout of every page, and this is especially clear in action sequences. Indeed, she’s the driving force of the action through the story – the thief, or the escapee. Keeping the perspective so close to Mia also aids Penick’s clear goal to align us with Mia. Despite keeping her character almost as inscrutable on the last page as she was on the first.

In the first few sequences you’ll get to know Mia’s character. Then the remainder of the comic introduces you to ‘Mia Raven’ and her world. Mia Raven, professional thief and CEO of Recovery Incorporated, is in the business of recovering stolen goods for the heftiest price tag you can imagine. That premise would have sold me on the comic if the opening hadn’t already.

Issue 1 of Recovery Incorporated effectively introduces us to the series’ protagonist. Though Mia’s monologue ends after the introduction, this whole issue is conveyed through her point of view. We gain further insights to her character through flashbacks and we see her interactions with clients, her colleagues, and how she spends her free time. As the title suggests, this story is a vignette, a day-in-the-life for Mia. This presents the tantalising promise that more issues of Recovery Incorporated will be just as diverse and exciting.

You can read more about Recovery Incorporated and support the Kickstarter here. Then don’t forget to sound off in the comments or send us your thoughts on Facebook or Twitter!