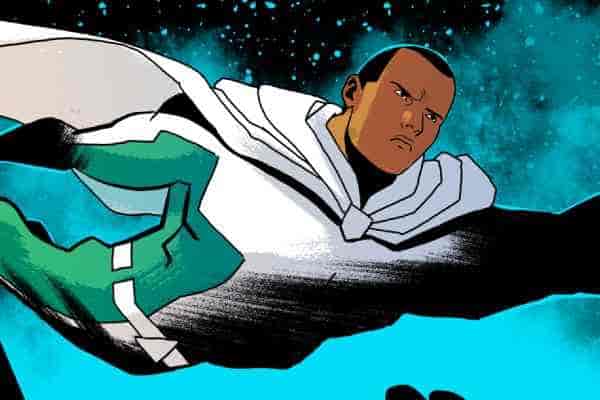 What if you were best friends with the world’s greatest superhero? And what if you uploaded something you couldn’t take back? The first issue of Super Best Friend answers with a fresh take on the superhero genre, which is heartfelt and treasures classic silver age adventures. It’s currently crowdfunding on Kickstarter, so we caught up with writer Jason Inman to hear more!

A Place To Hang Your Cape: So for those unfamiliar, what’s the story in Super Best Friend?

Jason Inman: Mattie Moore is the best friend of the world’s greatest superhero, Captain Terrific. He records the captain’s acts of heroism for the world to see on a channel called “SUPER BEST FRIEND.” However, everything changes when Mattie makes a grave mistake! He records Captain Terrific during a personal moment, accidentally revealing his secret identity, Calvin Cobb, to the entire world! It’s up to Mattie to restore his friend’s secret identity through any wacky means necessary. Can the young Mattie Moore repair this clamorous situation?

AP2HYC: Can you tell us a bit more about our hero – Mattie Moore?

JI: Mattie is a bright, optimistic and zany super-fan of superheroes. He’s like a younger version of me and an exaggeration of my time on DC All Access. His enthusiasm for superhero adventures consumes his entire life, and even though great superheroes tell Mattie he has many other skills and talents. Mattie doesn’t believe them. He thinks his only purpose is as the chronicler of these “larger than life” beings. Similar to all of us, Mattie has all the skills to move on to his greater purpose, and this story is his metaphorical push.

AP2HYC: And Captain Terrific – you’ve had him in your mind since 2006. What’s it like to use a character you came up with over a decade ago, and how does he fit into the stories you’re writing now?

JI: Terrific was the secondary character in a comedic one-act play I wrote in college. Back then, he was purely a Superman archetype. Now, Captain Terrific is a calm and centred character. He cares so much for other people that he tends to do everything himself because he’s so worried about innocents being hurt. He’s the ultimate protector and a really good friend. It’s not until Mattie’s actions in the first issue of Super Best Friend that Terrific gets knocked off his “A” game. Becoming more human and varied like the rest of us.

AP2HYC: Tomorrow City has its own Superman with Captain Terrific and Jimmy Olsen with Mattie. How would you compare Tomorrow City and its heroes to those in big publishers? How have you brought them into the modern world?

JI: The heroes of Super Best Friend are way more progressive than the heroes of the Big Two. It’s always flummoxed me when the Justice League doesn’t stay around after a natural disaster. Why can’t they distribute food and water? Why don’t they help rebuild people’s houses at super speed? Those heroes stop the flood waters and then move on! “Good luck, you’re on your own.”

I think superheroes would be more active in our world. Pushing actual change forward in ways we couldn’t even think of. Captain Terrific and the heroes of The Assembly, Super Best Friend’s superhero team, are those heroes. Their mission is more than stopping crime; it’s about helping people.

AP2HYC: You’ve said you drew influence from silver age comics especially, but are there any particular influences, comics or characters, you think we’ll recognise?

JI: It would be remiss if I did not mention the astounding work of Dwayne McDuffie and M. D. Bright on Icon. That comic had a profound effect on me, and it inspires a lot of how Captain Terrific behaves in this story.

AP2HYC: Can you tell us a bit more about the creative team on Super Best Friend?

JI: George Kambadais, our artist, was someone that I was a fan of for a very long time. I was elated when I pitched this story to him and he hopped onboard. His art is amazing. George brings an emotional style to Captain Terrific and Mattie that I had never considered about them before.

Our letters are by Taylor Esposito. Taylor is actually the real powerhouse of the book, and everyday I see his name announced on bigger and bigger books. Taylor lettered my very first comic work, and if I can, I’ll continue working with him on every book I ever create.

AP2HYC: I understand Super Best Friend #2 is already in the pipeline? How far do you picture the story going?

Also, I specifically designed each other superhero in this book to be able to have their own spin-off title with themes and emotions designed differently from Super Best Friend. So if the readers want it, I could be creating books in the Super Best Friend world for years to come.

AP2HYC: Lastly, what advice do you have for creators crowdfunding their first comic?

JI: Don’t be afraid to ask for advice or favours. When I first launched my campaign, I emailed Jimmy Palmiotti and Greg Pak for advice, and they responded with super helpful tips and tricks. If you know a creator who was successful on Kickstarter that you’re a fan of, ask them for help. The advice will be invaluable.

You can find out more about Super Best Friend and support the campaign at the Kickstarter here! Then don’t forget to sound off in the comments below or send us your thoughts on Facebook or Twitter!