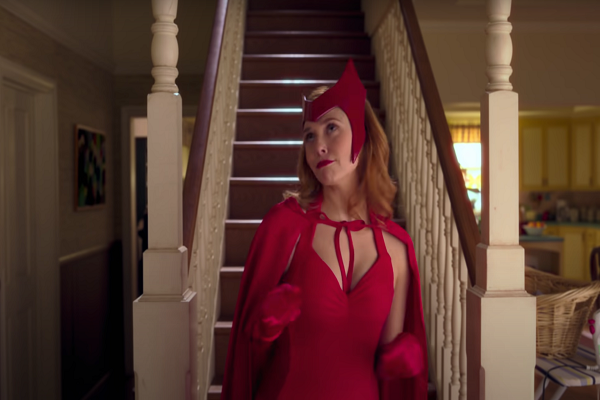 Wanda’s still playing by sitcom rules, but in her now Modern Family-esque show her life is officially a drama. With the new size of the Hex, Wanda’s powers seem to be on the fritz and her house constantly shifts between eras. She gives herself the day off and decides not to leave the house. Her exhaustion is understandable though. From Wanda’s perspective, it has only been a few weeks since Infinity War. In those short weeks she immediately had to fight Thanos a second time, rescue Vision’s body from S.W.O.R.D. and deal with six decades worth of sitcoms. These events and burdens are now taking their toll. Wanda’s complaints about watching the kids are cut short by Agnes on cue like always, ready to whisk the children away and give the supermom a break.

Vision is now back together, finding himself in the newly created circus. After freeing Darcy from her escape artist persona, the two of them make their way back to the Maximoff house. The journey is elongated greatly by outside interference with the two being stuck on an intersection for the majority of the episode. Vision off-handedly remarks that perhaps Wanda is causing them to be stalled there. In reality it is the same force that has been pushing them apart from the start, but more on that in a second.

In the outside world Monica and Woo learn the reason why S.W.O.R.D. had Vision’s body. To revive him as their own private weapon. Project Cataract (get it? Because they are causing a loss of vision? Terribly clever) was however a failure, until Wanda came along and created the Hex. So now S.W.O.R.D. hopes to get their sentient super weapon back. Monica, after a failed attempt to get into the Hex safely, decides to push in by herself. She manages to make it through the barrier but changed somehow. With blue eyes and the ability to see energy, she is now a step closer to becoming Photon from the comics.

Her powers remain unclear, but moments later when grabbed by Wanda, she easily breaks free. Monica tells Wanda about the danger Westview is in due to S.W.O.R.D. but before a breakthrough happens, Agnes appears again and convinces Wanda to come with her to her house.

Agnes’s home is strange, and frankly so is Agnes. Earlier in the episode Tommy reveals that with his powers he can basically hear the inner voices of everyone, except for Agnes, who has no such voice. As Wanda travels the home searching for her children she heads down to the basement. Seeming more like a dungeon, the basement contains a strange tome and relics scattered about (Mephisto fans keep your eyes peeled). Before Wanda can fully react to the situation, Agnes appears, in full witch’s garb. She is actually Agatha Harkness, and she was behind everything going wrong in Westville. And she killed Sparky too! And now she has Wanda under her control.

Some highlights from the episode: Agnes’ Munster’s-esque theme song was probably one of the high points of the series for me. Vision and Darcy’s antics were actually very entertaining and the two have a great dynamic. Keep your T.V on as this episode actually features an after credits scene. Overall, episode 7 was very true to form for WandaVision. They did a fantastic job adapting to the new era and genre. With two episodes left in what hopefully is the first of many seasons, a large question remains; How to defeat Agatha?

Are you enjoying WandaVision? Think Mephisto will make an appearance? Sound off in the comments or send us your thoughts on Twitter!