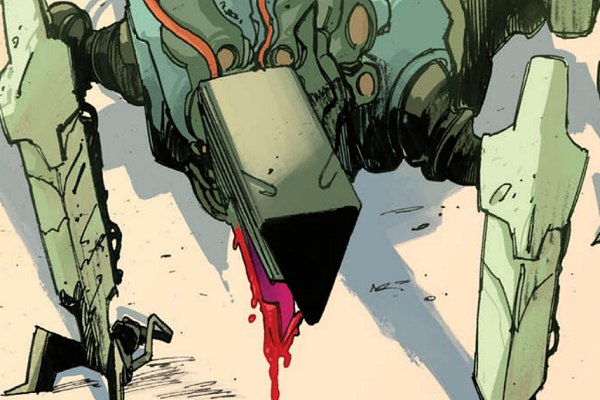 Back in 2019, Gustaffo Vargas released MANU Altiplano Vol. 1, a character-driven Peruvian cyberpunk comic. It fleshes out the world Vargas previously built in L1MA and TRUJILL0, but focuses more on the characters and the narrative. PUNO is the newly released second part of the Altiplano series, with the third instalment set to release by the end of this year. Now that PUNO‘s been released, let’s take a dive into the Peruvian cyberpunk world and explore what PUNO has to offer. Spoilers ahead for both MANU and PUNO! I’d highly recommend reading them both before delving into this article.

PUNO begins with an interrogation scene. Our villains are searching for photo evidence of Poma; a gang member who has a government bug planted in him. The bug grants him superpowers, but as of right now we don’t know what those powers specifically are. All we know is that he’s dangerous, and he’s a childhood friend of Lila.

The interrogation introduces us to P3RRO; a cybernetic hound. It’s fully artificial, unlike the animals we saw in MANU. Those were mostly organic with a few enhancements here and there. P3RRO quickly proves to be both competent and dangerous, killing a man in mere seconds. It’s later shown to be responsible for killing the entire town of civilians.

We soon cut back to Sonia and Lila, our protagonists from MANU, who have just left their tense conversation with Xolo. Lila previously agreed to Xolo’s plan in exchange for information, and we see that plan enacted in PUNO. Long story short, she seduces a top tier gang member and plants a bug in him that ultimately kills him. However, this comes at the cost of her relationship with Sonia. It’s a messy breakup, to say the least. After enacting the plan and successfully confirming the gang member’s death, Xolo tells Lila all he knows. He reveals that the Coalition Army has entered Peruvian territory and is closing in on their target – Poma. We’re left on a tense cliffhanger as we see the army trekking over the highlands, several P3RRO units in tow.

There’s a lot to love about this world and its characters. MANU mostly takes place in the jungle and shows us the wildlife, and PUNO takes us into the bustling streets of Peru. Where MANU shows us the technology hidden away in the wilderness, PUNO has hardly any organic life to speak of. It’s a stark contrast that keys us into just how technologically advanced this world is, though it hasn’t quite taken over yet. In MANU we also see Lila communicating with these cybernetically enhanced animals. She had that connection with them, but seems to lack any connection with the suburbs in PUNO.

We also get more info on Poma, Lila’s childhood friend and our villains’ current target. We learn that his fusion with the government bot granted him immense power, and that he used this power to boost his gang’s notoriety. Back in MANU we learned he didn’t think of himself too highly since he’s chubby and seen as lesser than other gang members. But this rise to power must’ve done wonders for his self confidence. It’ll be interesting to see whether or not he’ll back down without a fight. That might entirely depend on Lila, who’s on course to track him down.

This is just a fancy way of me saying that the world is gripping and interesting for a multitude of reasons. Now that we’ve seen the jungle and the city, it’s safe to say that a lot of love went into both of these settings. Every page had something new to reveal about these compelling locations. Lila and Sonia felt right at home wherever they travelled to thanks to their designs and the details in each setting. I’m excited to see where Lila travels to next and see how she interacts with the landscape. If PUNO‘s ending is anything to go by, we’ll be seeing some conflict in the Peruvian Highlands.

PUNO is a thrilling sequel to MANU in every aspect. It keeps up the barrage of bright vibrant colors on every page. The art style is gritty, and it’s a pleasing contrast against the constant pops of color. The character and setting designs have a lot of thought put into them, as shown in the last few pages of the comic. Every character, especially Lila and Sonia, are gripping and sympathetic. They’re both flawed, but I couldn’t help but root for both of them despite their differences.

That being said, I’m excited for the third instalment in the Altiplano series. Vargas has built a compelling world with clear stakes and an interesting ensemble of characters. Personally, I hope we get to see more of the main villains in the upcoming issue. We got their designs in MANU, and we got their primary motivation in PUNO. Vasquez and Donovan comparatively had little screen time in both MANU and PUNO, and based on PUNO‘s ending they could get their time to shine soon. And who knows? Xolo could shape out to be the secret supervillain with how he’s been acting…

Back in February, Vargas delved into the inner workings of his world building in an interview with us. Now that the Kickstarter is complete, you can purchase PUNO and MANU on Gustaffo Vargas’s BigCartel page. They are both available for £6 (approximately $8.47). PILCUYO, the third and final installment of the series, will be released by the end of 2021.

What did you think of PUNO? Was it a good sequel to MANU? Let us know in the comments or send us your thoughts on Facebook or Twitter!