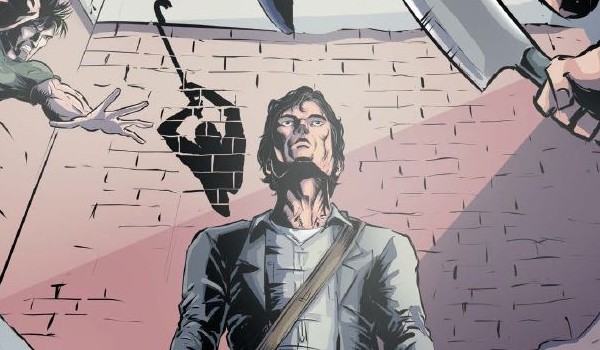 The Epics of Enkidu, written by Ahmed Ameen and inked by Moacir Muniz, starts with a brilliant premise; what if we take this half-wild character from the Epic of Gilgamesh, and transplant him into the present day? Set in modern day Iraq, the comic features Enkidu from the Epic of Gilgamesh. He’s supposedly the same person from the original story. However, how he came to the modern day is yet to be explained.

The story begins with Enkidu on a train approaching the station. A yellow narration box explains that he’s autistic and has pattern recognition abilities. He uses this to save a little kid from falling and rescues a woman’s phone from a thief. Conflict arises when a friend of the thief confronts Enkidu. He ultimately lets him go but not before insulting Enkidu for speaking differently and shoving him away. Outside of the station, Enkidu walks into a tunnel followed by four men, including the thief’s friend. He defeats all of them and comes out the other side of the tunnel. It’s revealed that the narrator is a man in ancient clothing watching Enkidu from above.

Unfortunately, the first issue gets off to a shaky start. The hyper detailed art style creates heavy shading with light and shadow. It renders every expression with intricacy, which is a little too distracting for my taste. At times the dialogue is awkward, especially at the end, and the narration can add unnecessary exposition. The story is somewhat confusing; very little happens in #1. This might be because it is a product of being the first issue. However, there does seem to be some setup for the next issue with the mysterious narrator appearing at the end.

Flyers for different autism organizations fragment the narration. The build-up of tension is decent, but the conflict is resolved within a few pages and the cliffhanger at the end is confusing. The color palette for the art is bold, with toned-down shades for the interior spaces and brighter ones as the characters move from the train station. The author chooses to present Enkidu as autistic. This is an interesting choice, raising awareness for autism while also destigmatizing it. It’s a legitimately fascinating idea to create an autistic superhero, one that most people wouldn’t attempt. If done with inspiration and care, this story could be a subversive take on the whole genre.

There’s a very good story somewhere inside of The Epics of Enkidu, it just hasn’t settled into itself yet. With time, this comic has limitless potential. It can become a new take on the oversaturated genre of superhero comics. Comics such as Matt Fraction and David Aja’s Hawkeye explore disability in a comic book universe, but not on the same level as The Epics of Enkidu has the potential to. After all, at the end of the day—who gets to decide who is a hero? It’s laughable that all heroes are expected to be able-bodied, as though that has import on noble actions. Everyone has the possibility to be a hero; the only limit is imagination.

What do you think the next issue has in store? If you’re interested to read and follow The Epics of Enkidu, you can purchase the first issue on Amazon. Let us know if you like it by sounding off in the comments or sending us your thoughts on Facebook or Twitter.