Home » “This Land” has a Superpowered Start to the Series 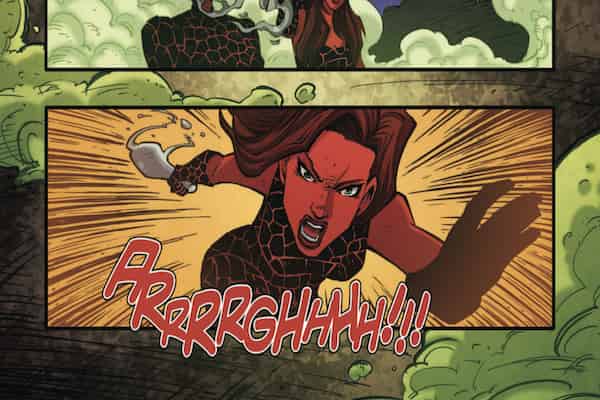 This Land, from Aroha Comics, is a new action-adventure comic written by Mark Abnett with art by P.R. Dedeles. Set in a reborn world of Aotearoa/New Zealand, “This Land” is bright, stylish, and creative.  It prides itself on its embrace of Maori culture and language, and it certainly creates a unique and captivating world.

The story follows Hell’na, a warrior from Axeland with a mysterious past and a desire to save her family. Her life changes when a man claiming to be an ancient god literally falls into her world. Exposition about the world, characters, and plot are all handled really well. Nothing is overly confusing, though there is clearly a lot of detail and nuances in this reborn world that the comic takes its time exploring. There are a few things that I feel lack a bit of context, mainly Hell’na’s backstory, but it doesn’t take away from the charm of her character, nor does it damper the fun and excitement of her quest.

This Land is consistently both visually stunning and incredibly creative. The art is beautiful, with vibrant landscapes, exciting action, and character designs that are bright, unique, and memorable. Hell’na and the colorful cast of mercenaries she encounters have designs that reflect their culture, abilities, and personality. This, along side a slew of unique and inventive powers and skillsets, turns This Land into an incredibly original story akin to a superhero team-up comic.

In addition to Hell’na, who wields fire and can reshape her “Mana steel” weapons, we are introduced to a whole colorful cast of likable and interesting characters. Each have their own set of unique abilities and cultures that they hail from. My favorite so far is Beach, a soft-spoken manipulator of sand that makes up his bodies, losing a little bit of himself every time he fights. Not everyone gets quite as much time to shine in these first two issues as others in the group, but their presence is enough to make me want to keep reading and find out more about this ensemble cast.

I absolutely love the blending of future-fantasy setting, tech, and abilities with the real world culture of the Maori. It would be easy to compare this with something like Avatar: the Last Airbender, with elemental powers and cultures inspired by the real world. However, I think that would take away from the fantastic work Abnett and Dedeles have done here in crafting this world. I’m admittedly not familiar at all with Maori culture, but this comic makes me want to learn. Luckily, the first page of every issue includes a link to MAORIDICTIONARY.CO.NZ. This page encourages readers to check it out to better understand the history and culture of our own world as well as that of the comic.

With a remarkably original world, This Land #1 and 2 are a more than promising start to this action-adventure series. Its worldbuilding and integration of Maori culture is commendable and very effective, and makes for a start to a series that is entirely captivating.