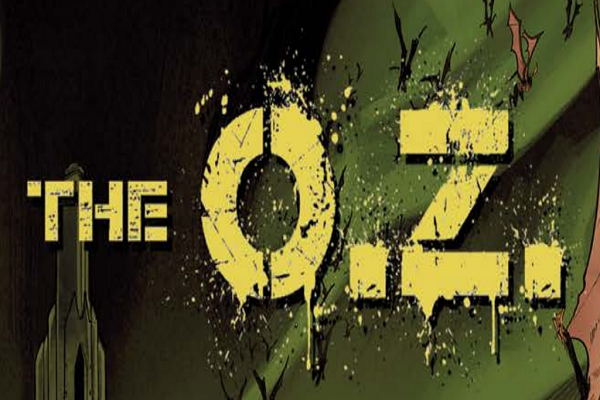 The Wizard of Oz is one of my favorite childhood movies to date. Who wouldn’t love the world of Oz and its eclectic group of whimsical characters? Now, how about we take that world and set it closer to the modern day; mix in some militaristic warfare for good measure. What do you get? The O.Z. – otherwise known as “the Occupied Zone”. This comic is a unique twist on a classic fantasy tale, with a grittier ensemble of characters. The general message for this particular adaptation is facing your fears.

Our protagonist is Dorothy Gale – not a surprise at all. But she’s very different from that dolled-up farm girl we all know and love from the original tale. A war veteran who previously fought in Iraq; Dorothy is still coming to terms with the fact that the world is now at peace. This is because she’s still fighting. Her memories are dangerous and they haunt her every waking moment. Dorothy admits it herself: “How do you see what I saw and then pretend like everything’s back to normal?”. This immediately sets her up to be a sympathetic character, piquing my investment right from the very start.

She starts off in Kansas, where we learn of her namesake grandmother – Dorothy Gale. For the sake of distinguishing the two, I’ll be referring to the older Dorothy as Ms. Gale. It’s clear that Ms. Gale and Dorothy have a wonderful relationship; Ms. Gale took Dorothy in at a young age and inspired her to serve in the military. However, Ms. Gale has now grown old and sickly, and Dorothy’s been taking care of her for quite some time. Ms. Gale has delusions; she thinks her precious dog Toto is alive and well despite Dorothy telling her otherwise. She also tells Dorothy about the O.Z.; a magical place on the other side of the rainbow. Of course, Dorothy never believes her.

Forced to accept that the stories Ms. Gale told her were true; Dorothy gets whisked away in her Jeep by a tornado and plopped down into a new warzone. It’s one that brings back old memories from her time serving. She meets the Tin Man and the Wizard of Oz, with a quick revelation of the latter’s true identity. The wizard is Toto, who’s now a talking dog. The other two prominent characters – the Scarecrow and the Courageous Lion – have yet to meet Dorothy. After all, the Courageous Lion is M.I.A., and the Scarecrow is our primary antagonist. We learn he was once in-charge of restoring Oz after the war against the Wicked Witch of the West. Back then, he harnessed her power in an attempt to rebuild Oz, but quickly became corrupted.

Dorothy’s given the chance to help the Tin Man restore Oz to its former glory. She’s hesitant at first, believing she isn’t the right woman for the job. But she quickly proves herself as a fierce warrior when flying monkeys attack a refugee camp. She defeats the Monkey King and declares that she’ll join the Resistance. We’re now left with a powerful image: Dorothy standing tall, waving a flag with other members of the refugee camp.

The team behind The O.Z. do an amazing job at blending modern day warfare with a bright and colorful fantasy realm. It’s dark and gritty, but still contains whimsical elements. This is most evident in the Munchkins and the Animal Kingdom. They are these humanoid creatures similar to the Courageous Lion. The Tin Man’s design is definitely my favorite. He’s cartoonish in a lot of ways, but still looks like a toughened soldier. I also really like the Scarecrow’s design, although we don’t see him much in #1. He looks like a proper scarecrow, but his demeanor and body language makes him appear all the more sinister. I’m excited to see him in action in the upcoming issues!

I only have one small complaint about The O.Z. It’s the reliance it has on narration. Dorothy’s inner dialogue is a mine of exposition. While there are moments where this helps forward the story, it does get excessive as the issue progresses. This is most evident in the refugee camp. She explains little details like how the Tin Man doesn’t appreciate being on guard duty, and how he pushes her out of the way of an incoming attack. This is something we get to see on the page and through the action. But the narration takes away from the urgency of the situation. It’s also strange how Dorothy is able to monologue about the Tin Man. It’s as if she knows him personally, when in reality—they only just met.

That minor complaint aside, I’m keeping an eye out for news on the second issue. I’m invested in this world and its characters, especially how Dorothy grows as a person. After all, she’s not in Kansas anymore. Who knows what adventures await her in The O.Z.?

What did you think of The O.Z.? Are you excited for the second issue? If you have yet to read the first issue but would like to, it’s available on David Pepose’s official website. If you’d like to learn more of the behind-the-scenes creation of The O.Z., you can read our interview with the creator here. Let us know your overall thoughts in the comments or send us a line on Facebook or Twitter!