Home » Why Spider-Man: No Way Home Should NOT Be a Spider-Verse Movie 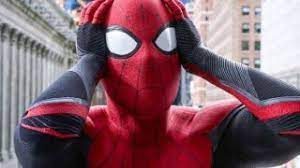 2021 promises to bring many things. Freedom? Maybe. Hope? Possibly. Renewed gusto for life? Ask me again in a few months. One thing we should be counting on though is the release of Spider-Man: No Way Home. The trilogy capper of the MCU spider franchise is hotly anticipated and not for lack of reason; the last instalment certainly left Tom Holland’s rendition of the webbed one in an interesting predicament. One rumoured element of this next adventure is causing fans to be particularly ravenous to slap this movie all over their ocular parts:  the promise of a live-action Spider-Verse. I know: how exciting! Well, my wonderful reader, I am here to tell you why that very notion is a bad idea.

I know, I know, what am I talking about?! I can’t be a true fan, I hear you scream. Well, keep screaming: it merely sustains me. Like all good formatted debate and weapons wielded by water gods, my argument is three pronged.

Firstly, I believe thrusting the spotlight away from Holland unfairly relieves him of ownership of the character. So far, I think the guy has had a solid run as Spidey and making him share the screen with other actors who have held the mantle risks him being side-lined in his own film. Obviously, this version of the character is bound to appear in future sequels and can further establish his arc, but I just feel it is an odd choice to distract us from such a vital character moment as his identity being public with the flashy, meta, in vogue plot device like the multiverse. Perhaps a separate event movie would be a better approach? Holland is a fine actor with incredible range. You need only watch The Devil All The Time to appreciate the depth he can bring to performances. Give him something interesting, character led and we would be sure to have something *ahem* spectacular on our hands.

2018’s Spider-Man: Into the Spider-Verse is a damn fine film. I would even go as far as to say it stands in both the pantheon of all time great superhero films and all time great animated films. I was absolutely thrilled to see Miles Morales get his own film and for it to be so fun, filled with heart and narratively interesting moments. I am arguably more excited for the sequel to Spider-Verse than I am for No Way Home. Perhaps I am biased, but I feel the MCU is stepping on the animated films toes here. The beauty of the comic medium is that multiple writers and artists can be creating stories with the same characters simultaneously that are different in tone and direction as well as canonically discrete. I feel this is a lesson that the filmmakers could take heed of; why not give us diverse takes on the character and explore different avenues? In fairness, this is a criticism of the genre in general as DC are all up in the multiverse space too, but the MCU is the forerunner of modern superhero films as we know it. It should lead change, not follow behind.

Finally, we have come to the crux of my argument. The big one. The haymaker. If we get to see Tobey Maguire’s Spider-Man on screen again, I will immediately want to see more sequels with him and lose interest in the current live action rendition. Perhaps it is my age, but Sam Raimi’s original Spider-Man trilogy is still, in my mind, the benchmark that all of the genre are measured against. It is the perfect blend of great filmmaking, comic book cheese and earnest love for the character. I still get goose bumps watching the first two and I even half heartedly defend the third (listen, if the film just focused on Sandman and maybe a bit of the Harry Osborn stuff, it would be great). The tantalising promise of going back to that universe is just too much to comprehend. If I get to see thirty minutes more of that version but then am shoved back into the MCU version, I will resent it. I audibly yelped with joy when I saw J.K. Simmons’ J Jonah Jameson back on screen in Far From Home but it was instantly followed by the bitter realisation that I was not watching Spider-Man 4.

For the sake of prolonged investment in their current offering, I believe Marvel need to consider their direction here. It has been suggested that we would be thrust back into Raimi’s universe directly at the tail end of Spider-Man 2 and perhaps this is to offset the potential desire for a sequel in this universe. If we see a snapshot of the already existing canon, fans can perhaps be satiated with more content but not teased with the prospect of a full blown sequel. This idea was touted heavily recently with interviews featuring Alfred Molina. As per Variety, on talking with No Way Home director Jon Watts, Molina said: “He just looked at me, and said, ‘Did you see what we did to Bob Downey Jr. and Sam Jackson?’”. This is all very intriguing but I pray to MCU overlord Kevin Feige (probably not his official title, mind you) every day to give me a Logan style adventure with Maguire’s Spider-Man. Please…pray with me.

Are you excited for multiple live action webheads on screen? Do you prefer your Spideys solo? Sound off in the comments or send us your thoughts on Twitter!