Home » The Switch Has Been Flipped: “The Thing That Stops The Badness” Explores A World Where People Can Bend Reality 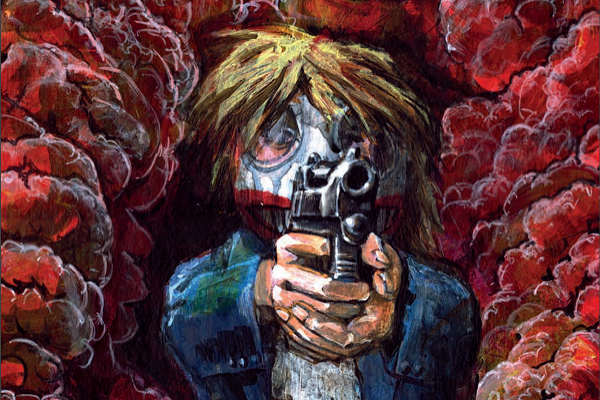 What if we all had superpowers? What if someone or something’s been keeping us from using these superpowers all our lives? And what would happen if, one day, we were freed from their grasp? Written by Steven Thompson, The Thing That Stops The Badness explores that reality and teases the chaos that would likely ensue. From the art style to the characters to the world being developed, there’s a lot to love about this thirty page adventure. So let’s dive right into a review, shall we?

The Thing That Stops The Badness was a successfully funded Kickstarter campaign. According to the campaign, the comic is “about the lives of people who find themselves suddenly freed from the control of a mysterious force”. This first issue explores the question of free will, and what would happen if people suddenly had the power to control reality itself. The story also hints that something has been controlling us our whole lives, and now that the switch has been flipped, the world is free to do as it wishes. But what consequences will follow? Is it truly a good idea to give everyone complete control over reality itself?

The Thing That Stops The Badness is the first part of a three part series, which means the story isn’t over yet. The majority of the first issue acts as worldbuilding and setup, and it introduces us to some key players. There’s some good banter and character development, and we already start to see the effects of people bending reality. Monsters spring from the shadows, watching and waiting. People bring the dead back to life through ice and snow. A woman turns into a ball of fire after becoming enraged. This is only the beginning, and it seems like the chaos has only just begun.

Perhaps the most charming part of this comic is its art style. Most comics nowadays are done in digital programs, with art and text drawn right on the screen. The Thing That Stops The Badness is traditionally drawn, save for a few touch-ups in Photoshop. You can see the individual brush strokes, the linework, and even the artist’s writing style! There’s even a few pages where you can see the pencil sketch underneath. Compared to most comics, it’s unpolished and messy at times. But that’s what’s charming about it. It reminds me of my attempts to make comics in my youth, long before I was introduced to digital art.

In an interview detailed in the comic, Daniel Bristow-Bailey keys us into the materials he uses. He explains that “with Badness, I’ve stuck to traditional media as much as possible – drawing and inking the artwork on A3 Bristol board and then colouring it using a mixture of watercolour and gouache”. It takes time and experience to master those materials, yet Bristow-Bailey created a masterpiece. The characters feel like living paintings, and everything is shaded in a way we normally wouldn’t find in most comics. Sure, it’s a bit messy, but it’s distinctly Bristow-Bailey’s style. As I was reading, I couldn’t help but marvel at the colors, the shading, the style – it’s all so unique, and best of all, it fits the story.

I loved nearly everything about this comic! I already gushed about how much I love the art style, but it’s truly unlike anything I’ve seen before. The premise is also exciting and captivating, and it starts and ends with so many fascinating questions. If this were our world and the entire population gained access to superpowers, would the chaos be the same? I think it would be.

That being said, this story definitely leans into speculative fiction. Even after this one issue, there are more questions than answers. It’s also hard to connect with most of the characters at times. We don’t know their motives and what’s driven them, especially with the team stationed on the mountain. One of my hopes for the next part is for the story to delve more into the team and their two “bosses”, one of which is the masked figure on the comic’s cover. I wonder why their mask looks so similar to the monsters the team encountered on the mountain…

As of writing this, there doesn’t seem to be any way to view The Thing That Stops The Badness unless you backed the Kickstarter. If you want to learn more about it, check out the completed Kickstarter here! Hopefully, we’ll hear some news about Part 2 soon. Maybe we can bend reality to make it happen.

What did you think of The Thing That Stops The Badness? Are you looking forward to the second issue? Let us know in the comments or send us your thoughts on Twitter!