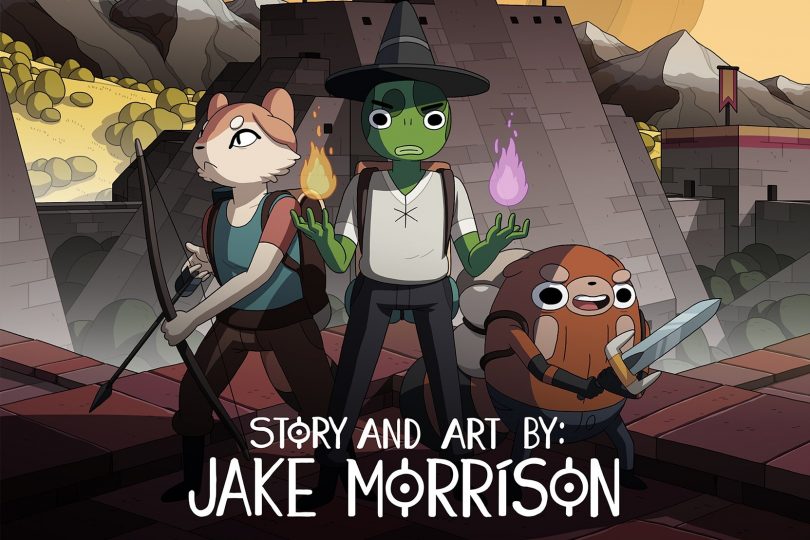 Meet Dani and Ramen: a lanky green frog and a chubby red panda with insatiable appetites and goofy senses of humor. After a leisurely walk, the brothers return home, dreaming of eating baked yams and creamed spinach – but are shocked to find a scene of utter destruction instead. Their house is destroyed, their forest has been razed to stumps. Who could’ve done this? And why?

Dani and Ramen: A Nomad’s Tale Volume #1, written and illustrated by Jake Morrison, is a charming start to what promises to be a fun, character-driven adventure. The comic follows Dani and Ramen as they salvage the last bits of home they can – a few jars of spices, a backpack full of food – and set out to find the culprits who destroyed their home. Inexperienced and impulsive, the duo quickly find themselves in over their heads as they travel dozens of miles away from home, fight powerful monsters, and stumble into a logging conspiracy that may even involve the King.

Characterization is crucial to making any Hero’s Journey-style adventure story work, and Morrison is particularly effective at creating strong individual personalities for the two lead characters. Dani, the older brother, is mature and level-headed, with pacifist leanings. Ramen, meanwhile, is a goofball eager to fight any challenge that comes his way. Together, though, the brothers share a strong dynamic; the two of them support each other even as they face fire-breathing monsters, are shadowed by a mysterious assassin, and end up lost in the wilderness. Their chemistry makes the numerous travel sequences that feature just the two of them talking particularly enjoyable.

The banter between the brothers is particularly delightful to read. Morrison’s dialogue is sharp and witty, infusing the comic with levity even at its tensest moments. The humor especially helps when the plot veers into fantasy cliché – a bog standard montage sequence with a wise old mage, for instance, or a fetch quest that would not be out of place in a RPG video game. Fighting a dragon may be fantasy cliché, but Ramen proposing defeating the monster with a pie-bomb made me laugh out loud.

Sure, the dialogue is also occasionally cheesy. But the corniness compliments the comic’s cartoonish style. Morrison’s Adventure Time-esque art is vibrant, featuring a medieval-fantasy style setting, a color palette that pops off the page, amusingly expressive characters, and plenty of visual humor to match the dialogue. The designs of the anthropomorphic animals and monsters that populate Dani and Ramen’s world are especially creative; a furry, neon blue, fire-breathing monster the brothers fight with comes to mind. All of these elements together construct a unique and imaginative world that is consistently fascinating to explore.

Overall, Dani and Ramen Volume #1 is a fun and effective introduction to an intriguing plot and pair of charismatic characters. It will be fascinating to see how the brothers develop throughout their journey as they unravel the numerous mysteries set up in this volume. Who took the trees, and what do they want? Why is Dani’s magical purple fire special? Regardless, Volume #1 is a thoroughly enjoyable graphic novel on its own, and a charming fantasy tale in its own right.

Support the Kickstarter for Dani and Ramen Volume #2 here! Have you read Volume #1? Are you excited for the next part of Dani and Ramen’s journey? Sound off in the comments or send us your thoughts on Facebook or Twitter!