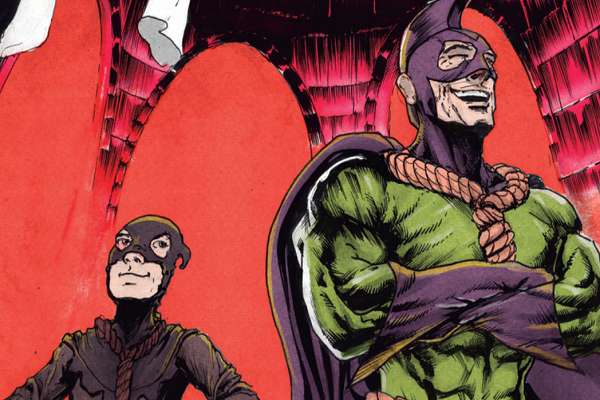 Bang! Pow! Kerblam! Here comes The Gallows Man! Set in the 1940s, The Gallows Man #1 is a hilariously campy parody that mimics the 1960s Batman series. Written by Brandon Ingram and art done by Helen Bouton, this is a story about revenge, beating up Nazis, and questionable heroes, with a little over-the-top violence mixed in for good measure. Every page has something to love; I mean, who wouldn’t love reading about a hero beating up Nazis? So let’s dive right into what makes this comic great.

The Gallows Man #1 follows the titular Gallows Man and his sidekick, Noose Boy. As you can probably guess, their whole schtick is hanging villains from ropes. It’s a little on the nose, sure, but it’s not like we haven’t seen superhero team themes before. Batman has Robin, Nightwing, Batgirl, you name it! By day, Bart Dickerson is a charming man who works at a funeral parlor. By night, he’s Gallows Man, tracking down a band of Nazis that have infiltrated the city. He’s also got a vendetta against this Nazi band’s leader, Major Swastika. He killed Gallows Man’s mentor, The Sparkle, and of course Gallows Man wants revenge.

If any of this sounds familiar, then you’ve at least heard of Batman before. Gallows Man has the dark, tragic backstory, the double life, the appropriately themed sidekick. Hell, he even has his own butler! It’s unmistakable that this is a parody, but what’s great is that it’s still distinctly Gallows Man. The world is full of campy heroes and villains alike, the dialogue is consistently funny, and even as Gallows Man, he’s not terribly brooding. He makes a few puns alongside Noose Boy, too! I mean, when was the last time an official Batman film let Bruce Wayne crack a bat pun? He could at LEAST make a joke about going to the bat-room.

Besides the lore dump surrounding The Sparkle’s death, this comic does a good job of setting up the world. We learn quickly that the Nazis are our primary villains, as well as where Gallows Man stands in the world of heroes. We even learn about Bart Dickerson’s life as Bart Dickerson and what he does when he’s not masquerading as a masked hero. There are little moments that develop him as a good person, and there’s little moments that develop him as a comedic character. In one scene he’s waking up wearing only underwear and his Gallows Man mask. In the same scene, he’s talking about getting a good, healthy breakfast in. It’s the most important meal of the day, even for superheroes!

What I enjoy the most about this is that it sets Gallows Man up as a well developed character right from the get-go. With most parodies, you’ll get characters that are fairly one dimensional. Their role is to be comedic, and aside from their personality, we don’t know much about their past. But we know Gallows Man, and it seems likely we’ll continue to learn more about him in the future. He’s got history with villains other than Major Swastika and his Nazi buddies, as hinted by the end of the comic. Maybe it’s like how Batman has multiple villains! I’d be interested to see what tragic reasoning Gallows Man has in fighting Rusty Hook. Must be really bad, if he doesn’t want to talk about it.

The Gallows Man #1 is hilarious and full of tropes. If you liked the 1960s Batman, you’re bound to enjoy this, especially if you wanted to see Batman fight Nazis. That being said, just be wary before you start reading. There’s a fair amount of violence and blood, and it’s gruesome to say the least. It fits with how over-the-top this comic is, but the violence isn’t for the faint of heart. We’re talking blood, heads getting crushed, eyeballs falling out, guts getting spilled, and let’s not forget hanging. If you weren’t expecting hanging, then look at the names “Gallows Man” and “Noose Boy” again.

As a parody, the comic works wonderfully. As its own story, it also works wonderfully, though there’s a lot left to be desired. Who else has Gallows Man fought? What’s Major Swastika’s master plan? How did Noose Boy get recruited? How many rope puns can the duo make? Whatever the case, consider me roped in. Let’s hope the next issue doesn’t leave us hanging! (You now have permission to call me out for all these rope puns.)

You can check out The Gallows Man #1‘s Kickstarter here. Congrats to the team on getting fully funded in six hours!

What did you think of The Gallows Man #1? Are you excited for the second issue? Let us know in the comments or send us your thoughts on Twitter!