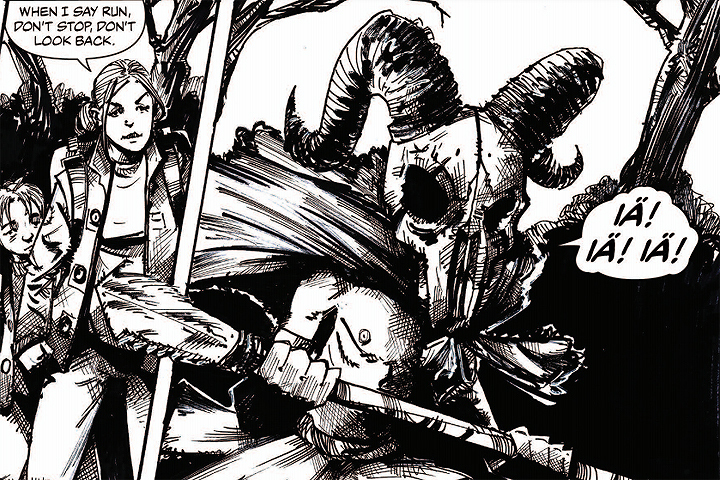 Abyssal Albion is written by Thomas J. Campbell and drawn by Wayne Lowden. It’s a story that relies on intrigue and dark mystery to build a compelling narrative. The plot begins into the woods, plunking us directly at the heart of the story. It’s jarring and purposeful. There aren’t any captions and the dialogue is sparse at first. Therefore, the reader has to figure out what’s happening by themselves. Savage-looking creatures attack the two unnamed characters. A man with an axe saves them and leads them to his home.

Something strange happened to this world, which they call the “Fall”. It twisted things and unleashed forces more ancient than us. They call it the “Awakening”. The unnamed girl wakes up in the Dreamlands, where she finds something called a zoog. She doesn’t understand what it’s talking about, but reveals that the boy traveling with her is her brother.

From there, the story devolves into violence, untwisting the plot’s web when the simple need for survival takes precedence. Survival drives this story, taking the lead over confusion. The reader is adrift in the world, but also grounded. We can focus on the protagonists as they navigate the uncertainty of who is friend and who is foe. It’s evident that the author plans on spinning out their tale overtime; the bones of the story are not hard to follow. However, the insistence of spoon-feeding readers pieces of information with no clear meaning detracts somewhat from the overall simplicity.

The art is drawn in an inked and almost intentionally crude style. Panel to panel, the faces of the cast appear different. This distortion creates a dreamlike effect, even though the style is rough and crosshatched. The art can appear jarring—but nevertheless, the style renders certain aspects in careful detail. The eldritch creatures and those corrupted by whatever dark force took over this world are perfect for this form. The artist is much better at drawing strange creatures with no discernable humanity than people. It almost makes me think the artist would have more fun just drawing creatures, while another artist draw the humans.

Without any kind of prologue, the events that take place don’t have much meaning outside their direct context. This makes it easier to concentrate on the actual events. But having the story start in medias res can be frustrating for a reader. There’s a sense that the protagonists don’t know much more about what’s going on then we do. However, the girl seems to be able to read a strange text that isn’t in English. Although, she perhaps doesn’t realize she’s doing this.

The reader’s lack of understanding is intentional, albeit confusing. Yes, you can’t really judge a story’s worth based on what is left out of the narrative. But for Abyssal Albion, this is effective on multiple levels. The pacing stays consistent throughout, except in the middle; the story slows down in order to give the reader information that hints towards the future. Any sort of story with multiple issues drawn out over time will run into obstacles around how much to reveal and how much to keep hidden. Still, Abyssal Albion manages to keep the story interesting while also building for the future.

If you feel like Abyssal Albion might just be your cup of tea, then check it out over at Comixology. What do you think will happen next? Tell us in the comments below, or send us over your theories via Twitter!