Home » Revenge of the Creeping Dead: In Conversation with Drew Edwards 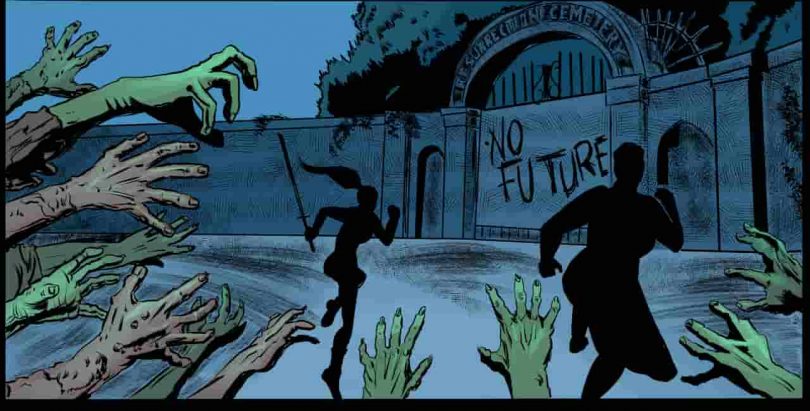 Get ready to relive those classic comic crossover vibes, The Revenge of the Creeping Dead throws together two female protagonists as they battle zombies. Creator Drew Edwards talks us through some of the creative process, inspiration and themes we are exposed to.

AP2HYC: Can you tell us a bit more about our heroes in The Revenge of the Creeping Dead: Sheri Ken and Lucy Chaplin?

DE: Sheri is the star of Aerobicide: The Extreme Ninja Workout and is the creation of Terry Parr and is a 20-something aerobics instructor in 1980s California. Aside from being an aerobics instructor, she is also possessed by ninja spirits through ancient chants and Heavy Metal music. So, just your average fun-loving, young lady.

Lucy Chaplin is the co-star of my long-running Halloween Man comic. She is a genius inventor, master martial artist, occult adventurer, power-lifter, and glamorous pin-up model. She has gone on to star in her own VERY successful series of spin-off comics.

AP2HYC: What was it like bringing these similar-yet-different characters together for the first time? It definitely reminds me of classic comic crossovers.

DE: This is my second time doing a crossover comic. The first time was the Hack/Slash vs. Halloween Man comic, which is now over ten years old. But I kind of learned the ropes from that one. I knew what I didn’t want to do in this one from that one. I feel like with Hack/Slash crossover I spent far too much time on set-up.

Because of that, I did go out of my way to avoid some of the tropes. It’s not one of those crossovers in which the heroes fight one another first. This is a true team-up and you’re in the middle of the adventure in a matter of a few pages. No muss, no fuss, no waiting around for the good stuff. We just leap into the zombie-smashing fun.

AP2HYC: The heroes are flung into an 80s horror flick, so are there any particular influences you’ll think we’ll recognize?

DE: Certainly more specifically Return of the Living Dead, as the movie the ladies enter is a loving parody of that film. But also anything that had a rock ‘n’ roll/MTV influence like the Black Roses or the Lost Boys. The relationship between rock music and horror during the 80s cannot be denied, so we leaned directly into it.

AP2HYC: Do you have a favourite moment in the story?

DE: I told Brian to squeeze as many cameos from “famous” movie zombies as possible into one page and by the lord, he really went for it.

AP2HYC: Can you tell us a bit about the creative team on the comic?

DE: There is the aforementioned Brian Crowley of Hamster Rage fame, who is the penciller and inker on the book. Wes Wong backs him on colors and April Guadiana on letters and graphic designer. I co-wrote the original story with Terry Parr and did the final script myself, with edits by Russell Hillman. It’s a good bunch. With the exception of Wesley, I’ve worked with all of them many times before. This time around, we all came together to quickly put out the most exciting comic possible!

AP2HYC: Finally, I understand the proceeds for this comic will be going to a very good cause. Please can you tell me a bit more about that?’

DE: YES! This is a benefit book for Aerobicide creator Terry Parr who contracted Covid-19 and has been hit with massive medical bills! So, by backing this project you’re not only getting cool comics, you can feel good about helping out a comic creator in need! And we’re less than a week left till the end of the fund, so we need every dollar to make this happen!