Home » A Game of Doubles: In Conversation with Jonathan Thompson 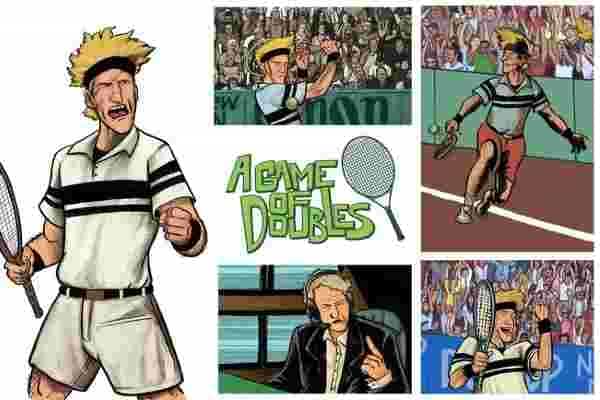 An all-star tennis tournament seems like an unusual setting for murder, but the treachery between jealous brothers feels perfectly in-keeping with the genre. A Game of Doubles experiments with the form – with alternate perspectives as well as alternative endings. We caught up with writer Jonathan Thompson to hear more about it…

A Place To Hang Your Cape: So, what’s the story in A Game of Doubles?

Jonathan Thompson: Jackson Teach was once a famous tennis pro who at the height of his stardom had a meltdown that ruined his career. Now, it’s 18 years later and Jackson’s 50th birthday party. One he celebrates with his identical twin brother Franklin. As Jackson watches Franklin go to the bathroom he follows…and in his hand he grips two vials. One with cocaine and one with rat poison.

AP2HYC: Can you tell us a bit more about Jackson and Franklin Teach. Apart from being twins, what sets them apart?

JT: The path their life took. Both were tennis hot shots in their youth but only Jackson went pro. Franklin was content with being his brother’s back up until he got sick of him. The brothers have drifted apart in life. Jackson still holding onto his former glory and Franklin settled as an average American man.

AP2HYC: It’s a very Hitchcockian premise. Did you have any particular type of murder-mystery in mind when coming up with this?

JT: It starts with Hitchcock. The doubles, treachery, tennis, and knowing there is a bomb under the table and waiting for it to explode. Then for the alternate endings I thought that suited identical twins. Also, in the 90s, the movie Clue had a different ending depending on what screening you went to. I thought it would be fun.

AP2HYC: How will the story work with alternative endings? Did this make the writing process a little difficult?

JT: It made the process even more fun. It is more about alternate POVS. One version takes place through Jackson’s eyes…the other through Franklin’s. You’ll notice dialogue changes and slight personality differences. But it comes hard at the ending. Only one brother can make it out of that bathroom alive…

AP2HYC: Do you prefer one ending over the other? Should we read both versions of the story together?

JT: My favorite is the double-sided one with both versions. It is just fun. Also, if we do a sequel you’ll need to read both!

AP2HYC: Can you tell us a bit about the creative team on the comic?

JT: Ryan Tavarez is an artist who I found through his work on Nomads…which is a very different type of comic. It is a Conan-like adventure story…so he was the perfect pick for a tennis and cocaine comic! My instincts were right though because he brought his A game to this book and really helped make it special.

Myself, Jonathan Thompson, I am the writer of a crime/horror Burn Residue and the sci-fi anthology Tales From The Dead Astronaut coming from Source Point Press in the Fall.

AP2HYC: Lastly, do you have a favourite moment in the story?

JT: What you can’t see yet is how the rhythm of the two page spreads work. It really is amazing how it came together. As the flashbacks between Jackson’s last game and the present day collide it creates a dizzying effect. It’s wonderful.

For more information, check out A Game of Doubles on Kickstarter here, then sound off in the comments or send us your thoughts on Facebook or Twitter!