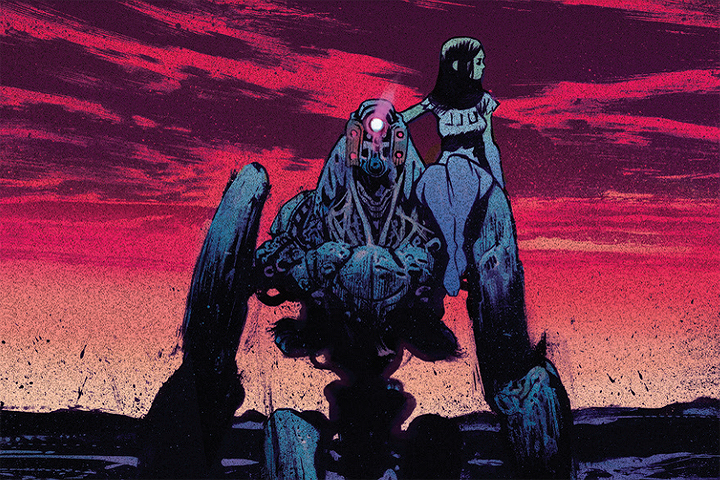 In First Knife, a tour de force by Simon Roy and Daniel Bensen, the world that we know has fallen. It’s the 33rd century and everything is different. Warring tribes – two of which centers the comic’s plot, the Hudsoni and the Yanqui – populate North America. The Hudsoni are warlike people who conquered the capital of the Yanqui. The capital is Shikka-Go, and that’s where we begin.

Mari is a Yanqui slave. She runs away and finds a creature buried in some rubble. The creature is a cyborg, and awakens to this new world that’s just as strange for him as it is for the reader; he comes from a time more similar to our own. The cyborg is the grounding point for the narrative; he knows and sympathizes with the reader’s confusion. Devas are aliens. They’re strange creatures that the Hudsoni see as gods, and the Yanqui see as demons – threatening to destroy the entire city of Shikka-Go in an effort to destroy the cyborg, Hesukristos.

A chief of the Hudsoni known as First Knife protests this destruction. The devas send him on a mission to kill the cyborg. When the mission fails, the Yanqui capture him and his soldiers. Together with Mari and Hesukristos, First Knife agrees to go on a quest to help Hesukristos find his comrades. What follows after is rife with both the petty grievances of humanity, and the intimate struggle of coming to terms with a changed world.

Woven through the story is the evidence of humanity’s fall; the landscape at first is a barren desert—filling up the places where houses and grass once grew with sand. Instead of facing the climate crisis, humanity devoted itself to creating weapons such as Hesukristos. At first, the cyborg doesn’t even know what a deva is. Humans didn’t create him to fight aliens, but to fight each other.

The endless cycle of violence plays out on a smaller scale between the Hudsoni and the Yanqui—the two locked in a permanent struggle for dominance. They fight each other, not because there’s a reason to, but because their hate for one another is stronger than any desire for peace. They don’t want peace, they want resources. This is the true human struggle. Although Hesukristos is no longer human, all he wants is his world back. His struggle doesn’t supersede the animosity between the Hudsoni and the Yanqui, but he does have advanced technology.

Perhaps he’s capable of crushing entire civilizations under his feet. Yet he doesn’t. The past completely absorbs him; he can’t think about the future, only in the fading memory of his fallen world. Mari and First Knife are different from him. They think about the future, and the new world that they inhabit. The world that Hesukristos clings to is one that no longer exists; all humans can do now is rebuild. They have to pick up the pieces of their shattered land and begin again.

The only possible problem with this graphic novel is how deep the lore is. We only have a few pages of description, but it’s obvious that there’s so much more the authors want to say about this world. The story stays focused, yet so much simmers below the surface. It’s almost frustrating that it refuses to slow down in pace to allow for a leisurely stroll through the world. The setting is too rich and full of life to end so abruptly.

Another problem stems from the lofty goals of this story. At times, just trying to parse out what’s going on is a distraction from the plot. But overall, First Knife is a powerful narrative. It simmers with life and beauty, and one I would definitely recommend checking out.

Want to dive into this new and shattered world of First Knife? The full collected edition is now available at Image Comics. If you read it, do you have a favorite tribe? Let us know all your thoughts and opinions in the comments down below, or send us a line on Facebook and Twitter!