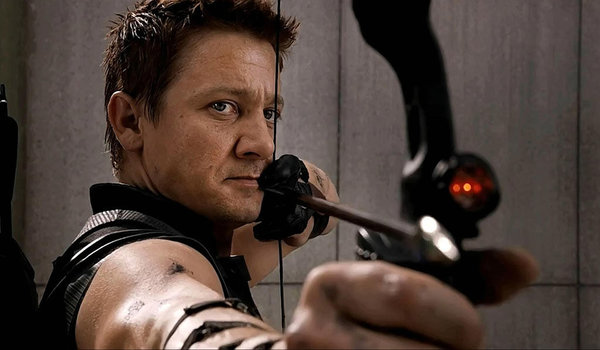 On a Saturday night in November 2012, in the heat of the battle against alien invaders, Hawkeye exclaimed: “I’m out of arrows.” There he stood, unconcerned, in front of an amused audience. Jeremy Renner, the actor incarnating the superhero, had just pushed the marksman’s journey into the uncharted territory of ridicule. It was on Saturday Night Live, “Episode 732.” Yet, jokes apart, there is more to this than watching a parody of the Avengers. The archer has had plenty of arrows to fire since then and the public has grown fonder and fonder of him.

Clint Barton’s human side is striking. Indeed, in the upcoming series Hawkeye we will see a close-up, intimate portrait of Barton, while the show also promises entertaining action. Viewers, readers and aficionados alike will not be able to resist diving straight into it. After all, Clint Barton is literally the guy next door. For example, in Hawkeye Vol. 1: My Life as a Weapon, the creative team depicted slice of life scenes that fostered the idea of a down-to-earth urban hero: he takes to heart his duties as an Avenger, however he also appears at ease and fulfilled in the company of his family, neighbours and friends.

Similarly, the show creator Jonathan Igla (twice winner of the Writers Guild of America Award with Mad Men) along with writers Katie Mathewson and Tanner Bean have joined forces in this new MCU episode to give us a multifaceted, complex and genuine character.

The eventful plot focuses on, among other endeavors, Barton as Kate Bishop’s mentor and the clever storyline works as the hinge to a remarkable character development process: in a universe that is mostly populated by superheroes with superpowers, both Barton and Bishop have none. Thanks to Barton, however, his protégée will learn the tricks of the trade and it will be interesting to see this as a true passing of the mantle.

Equally, another relevant aspect of the series (never that evident in previous MCU films) is one that strengthens the idea of a more realistic character: one that deals with hearing loss. Although it is not always clear how Hawkeye loses this sense, the theme is recurrent in many of his adventures featured in Marvel comics. Faithful to this, the show creators have integrated what is for many a real, everyday life battle into the dynamics of an otherwise fictional universe, as also mentioned on Screen Rant. There is more: Barton is not the only one using a hearing aid. Another character, Maya Lopez (alias Echo), will feature in the story too. This is perhaps a step forward in terms of representation, and visibility is fundamental in the ever-changing world we live in. Also, since media fruition has become prerogative across different age ranges, whenever witty, creative minds work together, they also spark people’s attention quickly. There is therefore hope that this approach will encourage a more participative, sensitised audience.

On the other hand, disabilities on the screen are not always represented accurately. This results in disappointment, and may sometimes turn into controversy. An article on Metro explores this topic with specific reference to deafness. How many times have you seen on a TV show disabled characters being played by actors who are themselves facing the same challenges in their lives? It seems that, disability is still misrepresented, or worse, underrepresented. Often, characters (even if in good faith) take over reality by a large margin. This happens when creators craft superpowers out of impairments. In Hawkeye, there is the suggestion that his great skills are linked to one great superpower: a super enhanced spatial awareness to compensate for his deafness. Something similar can be seen in Daredevil’s radar sense, resulting from his blindness. Of course, reality is far more complex, but what many viewers would appreciate more is an honest representation of it.

Will the new Hawkeye show turn Clint Barton into a paladin of people with disabilities? Perhaps not. However, what Disney+ are doing is encouraging and this will certainly bring a sense of freshness in an already solid character arc. Hawkeye has come a long way. He has indeed fostered the spirit of uniqueness, displaying a certain obstinacy too. He is charged with qualities that bring him closer to each one of us and I look forward to watching this show.

Hawkeye is coming to Disney+ at the end of the year. Are you also looking forward to it? What are your thoughts on disability representation on the screens? Let us know in the comments or send us your thoughts on Twitter!