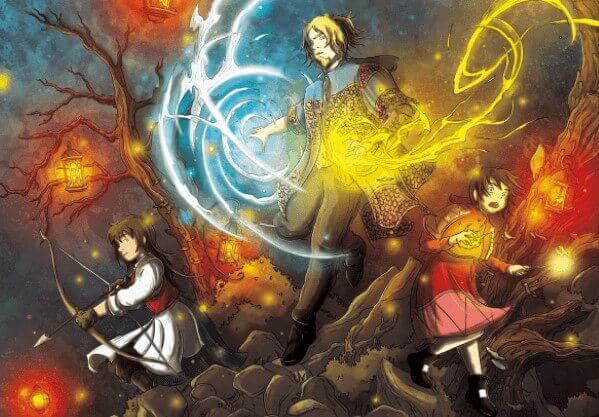 Candles by Lyndon White is a self-contained fantasy story that hits the ground running with an engaging adventure and beautiful artwork. The graphic novel takes place in a world filled with magic and balances the fairy-tale ambiance with a hint of darkness. The story immediately draws the reader into a battle against an evil witch that has terrorized the land for generations. The three protagonists, Grace, Idris, and Ava must embark on a quest to battle the witch if they hope to end the terror and prove magic can do good.

The story begins by giving the reader a hint at these character’s daily lives and the world they live in. The village feels like a familiar fairy-tale setting with one stark exception. All the residents are battle-hardened and ready to fight any monsters at a moment’s notice. This combative state is shown when the lush green scenery explodes into chaos as a giant wolf attacks the village. Dark-bark has infected the wolf. This nature-themed plague turns skin into tree bark and eventually the infected disappear into the forest. This plague is courtesy of the evil witch. It quickly becomes evident that she has been a threat for several generations; her constant threat has ingrained the fear of magic into the minds of all the villagers.

Grace, the protagonist, can do magic and desperately wants to use her abilities to protect her people. However, she is a dutiful daughter and follows her father’s command to never do magic. On the other hand, the characters Idris and Ava serve as a contrast to the relationship between Grace and her father. Idris is a father figure to Ava and these two sorcerers do not abstain from using magic. Instead, he mentors the young girl so that she can learn to control her powers and the moral obligations that belong with them. This gets them into plenty of trouble since using magic is taboo. Ava is adorable and eager to help others, but her good intentions and affinity for fire result in one too many accidents.

White’s artwork is one of the highlights of the graphic novel. The art is reminiscent of Studio Ghibli; the influence is evidently present in the character’s designs and the focus on nature. He uses vibrant colors and layered ink to create detailed panels. The fire definitely stole the show! The swirling hues of brilliant red and orange captured the flame’s movement. The orange overtones cast against dark pallets in the background contributed to the chaotic environment. This was especially notable with the appearance of the mysterious candles that float in the forest whenever the witch appears. Additionally, White uses the panels to track the movements of magic, the cause, and effect of each spell.

Overall, Candles is a fantasy adventure that any age group can enjoy. The familiarity of the fairy-tale quest gives the loveable characters a chance to shine as they set forth on their hero’s journey. But don’t be fooled by its charming appearance; there is surely some dark twist laying ahead for Grace, Idris, and Ava.

If you have a craving for magic and need to know what mysterious the candles mean, make sure to check out the Kickstarter for Candles now! Let us know what you think in the comments or send us your thoughts on  Facebook or Twitter!