Home » Growing Up In The Midst Of History With “Teenage Time Travellers: Night Stars”: In Conversation With Tim Lattie 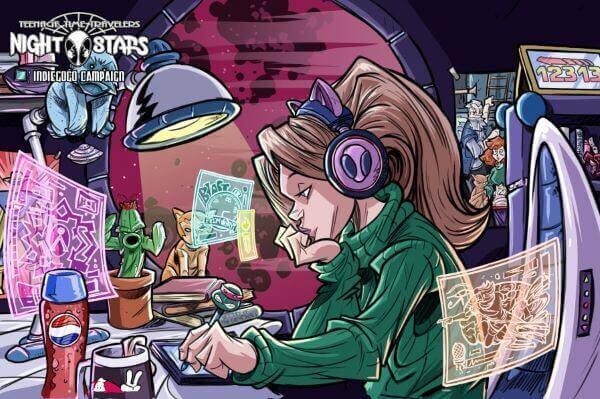 Creator Tim Lattie kicks out on his own with his new comic, Teenage Time Travellers: Night Stars. After working on the likes of Ghostbusters, Teenage Mutant Ninja Turtles and GI Joe, Tim exudes excitement as he discusses his new venture with us.

AP2HYC: What is Teenage Time Travellers: Night Stars all about?

Tim Lattie: Night Stars is a 125-page hardcover. It follows the adventures of Adam, John, and Leslie; normal kids gearing up for winter vacation. One afternoon, while in the woods behind their house, they stumble upon a flying saucer. Inside the strange vessel, they receive special suits that give them the appearance of the classic “little green men”. They quickly discover that the saucer isn’t a spaceship at all. But rather, a time machine. From there, it’s their journey throughout time dealing with history’s mysteries. They knock Amelia Earhart‘s plane out of the sky, one falls in love with Anne Frank, and they even get a pet yeti!

AP2HYC:  Where did the inspirations come from for this comic, and why have you chosen to genre hop?

TL: The inspiration came from a Van Gogh painting of the same name. In fact, all throughout the book, there are hidden Van Gogh paintings. I chose to genre jump so the book doesn’t limit itself, myself, or the audience. That’s one of the fun parts about this project! You can go anywhere at any time! I love myths and legends as well, so I plan on delving deeper into that subject. [I’m] always keeping fun references to pop culture and nostalgia from my youth.

AP2HYC: What themes should we expect to see throughout the comic?

TL: The main theme comes in the first few pages; the father tells his daughter Leslie on the rooftop that “it’s at night when stars shine their brightest”. That’s the big character theme here; that through adversity, that is when we really discover what we’re made of. It’s a story of growing up while going back in time!

TL: I have many influences. But, I’d call it McfarlAnime if asked. I grew up with so many amazing creators of the 90’s. The likes of Jim Blalent, Todd McFarlane, Dan Jurgens, Jim Aparo, and my all time favorite, Tom Grummett. But I’m also heavily influenced by animation and anime as well. Best of both worlds, east and west!

AP2HYC: Do you have any other projects you’re working on? How do they compare?

TL: I still work on some Ghostbusters and G.I Joe. So, there will always be that nostalgia factor. That’s where my love for all this started, [after all]. I’m also working on a book with one of my favorite creators growing up, Chuck Dixon. He created Bane and wrote the Batman story arc Knightfall, as well as so many others. It’s a free web-comic that you can find exclusively at the Arkhaven website. I prefer to keep it fun in comics and acceptable for all ages, while still keeping the themes intelligent, and the story packed with a lot of action!

AP2HYC: Where does Teenage Time Travellers go from here? What’s the most satisfying thing about working on this comic?

TL: From here, I plan on taking them to a desert island where they team up with Amelia Earhart after interrupting her voyage of circumnavigating the globe. It’s an homage to an old Muppet Babies episode. It will have giant spiders, exploding volcanoes; all in the style of a vintage radio play broadcast! That last sentence is what makes it so satisfying. When you decide to go the independent route, the only limitations you have is your imagination!

Teenage Time Travellers: Night Stars‘s funding campaign is still live and kicking. You don’t want to run out of time for this one! Tell us if this interview piqued your interest for it down in the comments below or through Twitter!