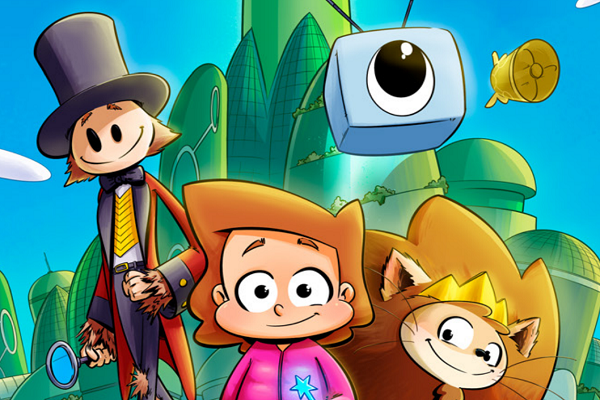 Magic doesn’t have to be just unexplainable flashy effects. Magic exists in our world, although it lives under a different name; we know this magic as “science”! In The Wizard of O2, we learn a little more about the magic behind weather and carbon dioxide. That, and the effects it all has on the Earth. Kids and adults can find enjoyment in its colorful, bubbly art style and informative story.

The Wizard of O2, as the title suggests, is heavily influenced by The Wizard of Oz. Dolores, the young daughter of a scientist, wishes for a world where she won’t get in trouble. Swept up and transported to a new, mystical realm, she joins the Scarecrow, the Lion, and a little flying gadget she calls Gizmo. The Tin Man is, well—he’s out of the picture. It’s a real shame. But at least there’s a plausible—yet equally sad—reason as to why he’s not partaking in this silly adventure.

She affects the characters in numerous different ways. But what we soon discover along the way is how the characters affect her as well! And what’s interesting about The Wizard of O2 is the environmental message it sends. The Wicked Weather of the West, despite all her buildup and immense power, isn’t the real villain of the story. It’s the Munchkins!

The Munchkins all become woodsmen and have been harvesting natural resources at an incredibly fast rate. As a result, “carbonara” releases into the atmosphere, creating a blanket of heat. The Wizard tries to inform the Munchkins of their dangerous actions by rebuilding the Green City. It runs solely on wind power – “real magic”, as the Wizard explains. But the Munchkins don’t listen, and the Wizard becomes powerless to stop the Wicked Weather of the West.

After defeating the Wicked Weather of the West, Dolores tells the Munchkins that she’s going back home. But when they ask if she’ll return if the Weather comes back, Dolores says no. She can’t be the one to keep solving their problems. The Munchkins need to take responsibility and fix their own mistakes—rather than rely on someone else to do the dirty work. Dolores then returns home to her father with new lessons in tow.

Especially considering Dolores’s age, it’s a generational message about the state of the planet. The people that are destroying the Earth aren’t the ones who will be cleaning up the mess. It’ll be their kids, and their kids’ kids. We can’t let this vicious cycle continue; the planet’s life is at stake! She also learns that she has to take responsibility for her actions, whether they be good or bad. It’s a simple but effective message, applicable to any and all ages.

The Wizard of O2 is colorful and bright, with an adorable chibi-esque art style. It maintains this happy, bright world even in the face of the message it brings. I think it’s incredibly powerful and evocative. There’s one small thing I have an issue with, however. The ending is clunky; despite being a self-contained story, it leaves a lot of questions unanswered.

Personally, I wonder if Dolores’s father is responsible for Gizmo. He appears at the end when Dolores is back in the real world, and seems to be a conduit between the real world and Oz. Did Dolores’s father build Gizmo to teach her about responsibility? Maybe, maybe not. I can’t say any more about this without spoiling the ending. I had to read the last few pages a couple times to make sure I wasn’t missing things!

Overall though, this is a fun comic! If you’re looking for something with a meaningful message about environmentalism, but isn’t too grim and depressing, this might just be for you. As advertised, I would say it’s good for kids and adults alike. I do think, depending on the age, kids may see this as a fun parody of The Wizard of Oz. Those on the older side will probably see the bigger picture.

You can read this alongside your kids and make sure they understand the true message at play. And maybe, while they’re at it, those kids can figure out how to build a new Tin Man!

Want to read The Wizard of O2? Check out this link for a comprehensive list on where you can purchase and read this adorable comic! You can find it in major stores like Amazon or Google Play, or support the creators and purchase through KoFi or Itch.io. What did you think of The Wizard of O2? What do you think of the message it conveys? Let us know in the comments or send us your thoughts on Twitter!