Home » “Theatrics Volume 2” Is Another Knock-Out From TPub 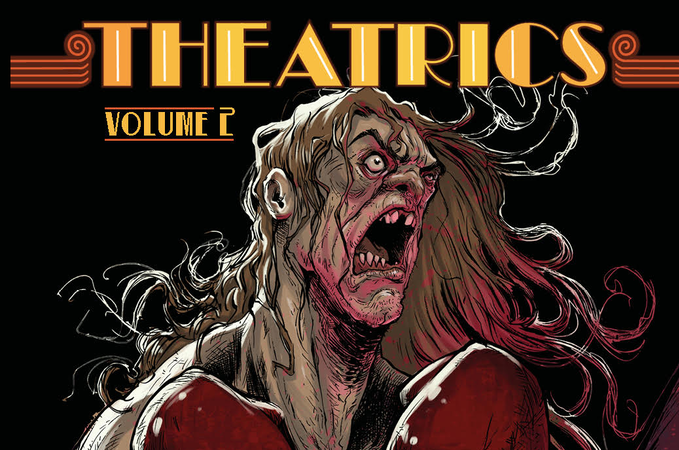 The epic conclusion to Theatrics is a real page-turner, with an ending that hits like a sucker punch. Following up the first Volume, Volume 2 sees the return of Neil Gibson in the writer’s chair, with Leonardo Gonzalez doing art, Jan Wijngaard as colourist and Jed McPherson on lettering.

In Volume 1, a Prohibition-era Broadway star named Rudy is viciously attacked and disfigured. But with the help of his friend and manager Sam, he picks himself back up to use his acting skills and monstrous looks to become a boxing sensation. Volume 2 picks up from Volume 1’s cliffhanger ending, seeing Rudy – now the Barbarian – getting ready for his biggest fight yet. But just when it looks like things are finally turning up for Rudy, something from the past comes back to knock him down.

It’s a bit hard to discuss much more of the story without spoiling it. Suffice to say, Gibson is a master of twists and this hits all the right notes of shocking the reader. However, on reflection there were plenty of seeds planted along the way. I, for one, thought the story was going to go in a very different direction, but I should know better by now to expect the unexpected in a TPub story. Beyond that, all I can say is that it’s a very clever theme to explore in the 1920s and that Theatrics is a very appropriate title.

This volume has a bit more boxing action than the first, and I loved the way Gonzalez draws the action. At times, you can feel the impact of some of the punches leaping off the page. The character design of the Barbarian is also great. It’s very believable that he was once a handsome star despite his current grotesque appearance. The subtle colour palette once again does a great job of capturing the time period, with lots of natural tones rather than garish, cartoony ones. Between the artwork and the writing, the comic does a great job of hooking you in and I read almost the whole thing in one sitting.

That said, I would have liked to have a bit more breathing room towards the middle. The pace keeps ramping up, where I think it would have benefitted from spending a bit more time exploring the world. There is a section that emphasises all the things Rudy has to give up to maintain the Barbarian persona, but it feels like it’s a bit too easy for him. For instance, how keeping up appearances constantly weighs on him even in the simplest of situations. Instead, the story focuses on the more dramatic elements of the secret identity, but given the twist in the end, I think seeing the Barbarian buying a newspaper or in a shop would have helped really knock the point of the ending home.

But otherwise, this is absolutely another knock-out for TPub!

Theatrics Volume 2 is currently funding on Kickstarter. Check out the campaign and pre-order your copy today!