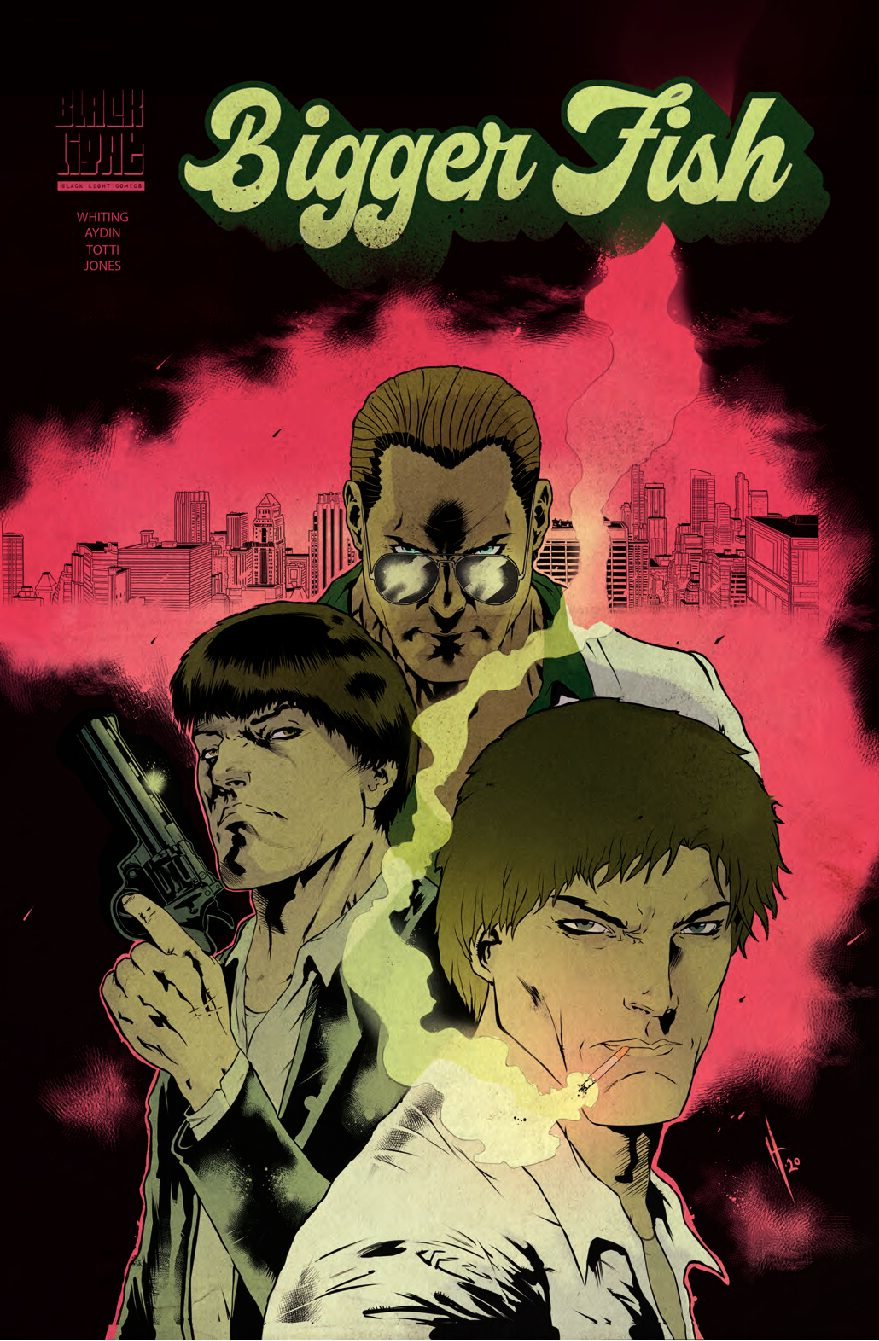 Finally! A comic that puts my US History degree into good use. And to think people actually questioned what I would utitlize this degree for. Look at me now!

So, the 70s were a complicated time in the United States. Some people are still nostalgic for that point in time; others are happy to be 50 years away from it. Despite the fact that they were in the middle of a war in Vietnam, there was also a new conflict emerging on home soil – the “War on Drugs”. While it didn’t fully escalate until the 80s, said war began in 1970. And with it brought a new wave of crime amongst the drug lords. This rise inevitably came along corruption within the police force. This is the issue Ed Whiting addresses in his crime story, Bigger Fish.

Whiting works alongside Hakan Aydin who is responsible for the comic’s art. J. Francis Totti on the other hand adds to the noir-esque landscape as the colorist. Finally, Robin Jones letters the graphic novel. Bigger Fish dives straight into a drug deal gone haywire involving two friends, Danny and Mike. Danny is the nephew of one of the most powerful crime bosses in New York City; Mike is an ex-soldier and former convict looking for work.

Danny, against his uncle’s wishes, offers Mike an opportunity as the presumptive successor to his uncle, Don Zappella. Don is a lucrative cocaine handoff with prominent Mexican cartel leader, Ernesto Valdez. Mike is initially hesitant to take part in this deal. But, eventually he decides to accompany his friend. That’s about all I’m going to say. Except for, if you’ve seen Reservoir Dogs, you’ll enjoy this comic. There are double crosses, shootouts, and twists galore! Especially as Bigger Fish builds towards its climactic end.

All the while, the cop duo of Boyd Dolan and Gene Wurlitzer attempt to infiltrate the deal. The two’s willingness to break every code adds to the comic’s tension and brings up how this “new all out-offensive” on drugs leads to a lot of criminals becoming more and more dangerous, and a lot of cops becoming even more corrupt. Not that many of these characters in Bigger Fish deserve much sympathy. Aside from maybe, our protagonist Mike. The story revolves around him, after all.

Mike turns out to be a lot more complex than meets the eye. At least, compared to his first appearance where Danny convinces him to take this job. Other than that, in terms of unexpected plot twists, Bigger Fish is a really fun read. I believe it would appeal to a lot of people. Whiting’s work additionally gives detailed insight into the criminal underworld during the 1970s. In this environment, it’s about breaking the right rules and laws, with one misstep proving to be potentially fatal.

Bigger Fish is a wild ride. I believe it will remind people of a lot of the neo-noir, crime drama cinematic classics they watched growing up.

So what did you think of Bigger Fish? And what part surprised you the most? If you need to put your own history smarts to use, give this one a try! It’s available here. You can also find out more about the creator Ed Whiting over on his Twitter. And while there, don’t forget to check out our own Twitter, and other socials such as Facebook!