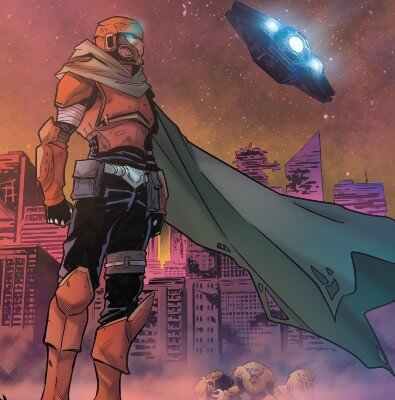 Pilgrim’s Dirge by Toben Racicot introduces us to a fast-paced sci-fi adventure on a desolate future version of Earth. The engaging story hits the ground running by introducing a defector’s quest to return home to his family, which quickly turns into being recruited for a mission far bigger than he imagined. The artwork is consistent and detailed, which helps the reader settle into the action and captures a vast post-apocalyptic universe. This first issue excels in foreshadowing the epic scope of the series whilst remaining grounded through the protagonist’s personal journey.

The story quickly sets the tone with a bloody battle between an armoured futuristic soldier and a hulking bestial predator, accompanied by a witty inner monologue. Despite the technology available, this is a fierce fight for survival after a failed campaign to reclaim Earth for humanity. The protagonist has abandoned this mission in favour of saving funds to escape the planet and return to his family. However, he is faced with encounters from new friends and foes alike that force him to see the bigger picture. This savage world features the use of magic and technology to fight wars, with references to mech suits, grimoires and magic powers. The unique mix of fantasy and sci-fi shown here suggests lots more for readers of both genres to enjoy in future issues.

The protagonist is Orin Daniels, the armoured soldier who wants nothing more than to see his family again. He refers back to the mission that caused his crisis of conscience and haunts his nightmares, but this is left ambiguous as the story swiftly introduces him to Kynzie Hollands. The mysterious woman knows exactly what happened and offers him atonement by recruiting him to help her save the galaxy. The unanswered questions and clear motivations for both of these characters make them compelling, especially when the story weighs the importance of a personal goal against a mission that could affect the lives of so many people. The story also avoids the trope of having the protagonist immediately give in and instead explores Orin’s attempt to move on alone before showing why he is forced to change his mind after all.

Matteo Leoni is credited with the artwork for Pilgrim’s Dirge, which benefits from his distinct designs for each character, creature or piece of tech. Orin’s armour invokes other sources whilst remaining unique with a flowing cape and combat shirt underneath. The initial fight is particularly appealing as it visually conveys how Orin is feeling despite only using the lit eyes of his helmet. Whilst post-apocalyptic landscapes are usually less colourful, Martina Bonanni’s work as the colorist brings the characters to life with Orin’s vibrant red armour and Kynzie’s green hair to match her brighter demeanor. Shadows are used well to add to the bleak tone of the abandoned planet and emphasize the mood of a darker scene.

Overall, Pilgrim’s Dirge sets up an exciting story that explores the connections between magic and technology in a post-apocalyptic setting. It introduces compelling characters and their mysterious pasts before sending them on a dangerous quest. With an ancient threat encroaching upon the galaxy, it is clear that Orin will have to overcome more than he imagined to complete his mission and see his family again.

If you’re a fan of sci-fi and fantasy stories with high stakes, be sure to check out the Kickstarter for Pilgrim’s Dirge now! Sound off in the comments below if you can’t wait to read more or send us your thoughts on Facebook or Twitter!