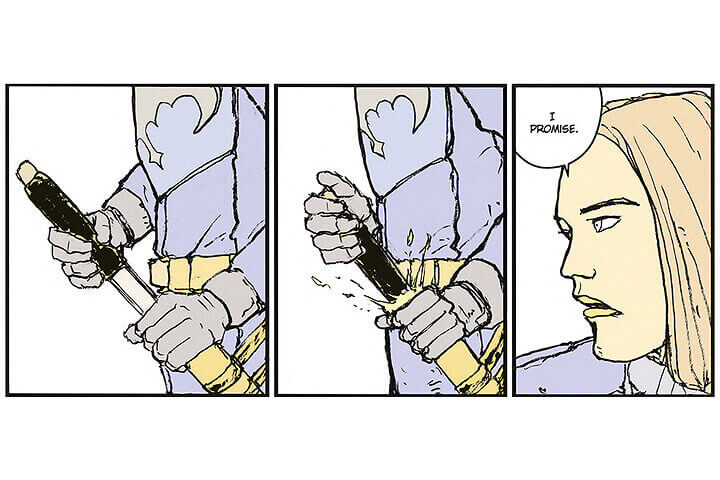 Break Run by Nima Afshar is about Branko. He is a soldier in a sci-fi world who abandoned his settlement after his commanding officer killed a group of miners. Ten years later, he learns that said officer Amon, is planning another attack on a mining rig. After a couple of fights, Branko ends up on a bike, ready to intercept and prevent another tragedy. The story has no major complexities: accessible, and easily summed up as an action comic.

Nothing of note tells the reader where and at what point in time this all takes place; whether it’s post-apocalyptic or set on some alien planet. However, we come to find that it starts just in the middle of things. Branko and Amon have history together, as Branko does with most of the other characters he runs into. Gaps in information either remain blank, or get filled in by character interaction.

In general, the story of Break Run stays contained within Branko and what happens to him. This prevents the reader from straying too far away from Branko’s perspective. On occasion, strange things occur; like a giant warrior that sometimes appears behind him. The comic never explains this, leaving the actual existence of the warrior up for interpretation.

Break Run’s art style is sketchy, albeit detailed; the artist has some difficulty with facial expressions. At times, this distracts from the storytelling. But on the whole, it does remain effective. While having a muted color palette – trending towards lighter shades – it still utilizes many different colors. Overall, the strangeness of the art might be attributed to its glow in the dark effects. The comic does advertise itself as the first full-length comic to be totally glow in the dark after all.

Very little happens outside of the action in the first few pages. However, Branko takes these chances to grapple with some existential questions. In particular, the morality of Amon’s actions. While Branko disagrees entirely with Amon and seeks to stop him, Amon’s actions bring into question the effectiveness of the government. Judging the situation with the little information the reader receives in the first twenty-eight pages proves to be difficult.

Nevertheless, Amon’s words about the corruption of the government – and the poor treatment of the settlement he worked for – serves as a small amount of justification for his actions. Branko has to survive being hunted due to the bounty Amon has on him. And in spite of those promises Amon made to him in the past, Amon repeats the crime that caused Branko to leave the settlement in the first place.

Morality does not serve much of a purpose in this first issue. Instead, there is a larger focus on action. The fight scenes get more interesting once Branko leaves the city behind; action shifts swiftly to a car chase. Watching the cars skid along and veer every which way provides good entertainment. That is until the story starts up again. At times, the chase is hard to follow; such as trying to figure out which car Branko drives.

The story kicks back in with more explanation of the plot as well as Branko’s character. With this, the excerpt ends. It becomes clear that violence and death are core issues for Branko. Although the first few pages provides no major detail over this, the issues after will surely follow him through with the rest of Break Run.

Want to see if there’s more to its morality than meets the eye? You can purchase Break Run and all its future issues via the Three Fold Comics site. Do you have any idea what happens next? If you do, make sure to sound off in the comments or tweet us all your predictions and opinions on Twitter!