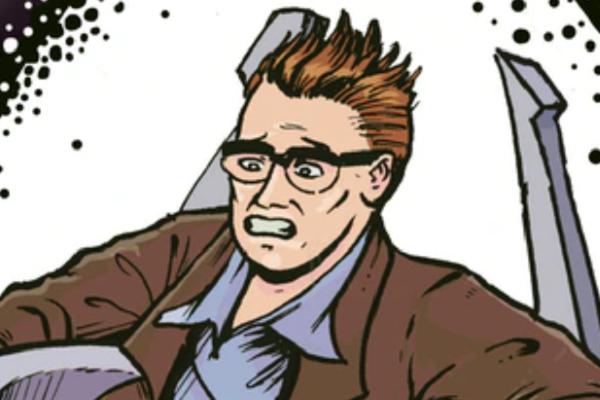 Hang on tight. We’re going to hop across dimensions! Though, wait a minute. Does this thing have any seatbelts? Well, that doesn’t matter to Fletcher Cross, scientist and adventurer across space and time! In Fletcher Cross: The Multiverse Awaits, we follow Fletcher Cross through his journeys on different planets and planes of existence. This review will have minor spoilers since I’ll be praising some of my favorite chapters in the anthology and briefly mentioning some of their summaries.

Fletcher Cross: The Multiverse Awaits is an anthology coming in at over one hundred pages of content. Since it’s an anthology, there are multiple shorter stories created by different writers and artists. However, they all follow the same protagonist, Fletcher Cross, and his journey across the multiverse. He starts off as an overachieving scientist who desperately wants to test his “compass,” a chair that can take its user across dimensions. He doesn’t get permission to test it, but he does it anyway! On his numerous journeys, Fletcher Cross encounters everything from Nazis to dinosaurs to aliens wearing purple spandex. Every adventure brings something new to the table and is connected. They function like chapters and should be read in chronological order.

To give you an idea of what these stories are like, it’s very similar to Doctor Who. However, Fletcher Cross is just an ordinary scientist, and his multidimensional time-traveling machine is a simple retro chair. It changes in appearance depending on where he lands, and sometimes it looks a lot more comfortable. No matter what, Fletcher Cross always makes it out alive, though the planets he leaves behind might be worse for wear, thanks to his visit. That’s actually one of the most charming parts of this comic, but I’ll talk more about that in a bit.

Since every chapter is connected, the story itself wraps up really nicely. It begins with Fletcher Cross’s origins and the beginning of his travels, and it ends with his return to his homeworld. He learns a lot about himself during each individual story, and he walks away with many life lessons. It’s incredibly satisfying to see Fletcher Cross get some kind of character arc, rather than being a simple adventurer biting off more than he can chew.

The Art Styles And Imagination

As I mentioned before, there are multiple people working on the art and writing for each story. So that means nothing is consistent aside from Fletcher Cross and his handy dandy time-traveling chair. Each chapter revolves around his adventures in different worlds. There’s a lot of tone variation in these stories, too. So some are funny, some are a little on the darker side. One simply features Fletcher Cross punching a Nazi and leaving shortly afterward. Short, sweet and to the point. Frankly, there’s something for everyone in this anthology.

I can’t exactly give you a solid, consistent answer on what I thought of the art style. I really enjoyed the variety in each story, and you could definitely tell when a new artist or writer stepped in. Some styles were cartoony and fun, and others were more sketchy and realistic. Some even featured that dotted pattern that you see in vintage comics! (I feel like such an impostor. It’s Pop Art. I had to look it up because it was driving me insane.) One of my favorites, titled “Hotel California,” written and lettered by Johnny Cassidy with art by Chad Lecuc, featured a black and white noir style. It really fit the 1930s aesthetic, especially since this particular story fell more into the murder mystery genre.

Some of the chapters were a lot more developed than others, however. “&%#$ Nazis,” by Kylar Merrell with art and letters by Veronica Jones, was only a page long, and that was one of many instances where there wasn’t much aside from a quick page of content. I wouldn’t call it jarring, but considering how much love clearly went into the bigger chapters, I would’ve loved to see every chapter get the same treatment. The team over at Foreign Press Comics absolutely knows how to create an engaging story within a few short pages. But there’s a point where it’s too short to say anything of value, y’know? And even then, this is only a minor complaint. Complaint is too strong of a word, too.

Overall, I’d definitely give Fletcher Cross: The Multiverse Awaits a read! It’s got something for everyone, from humor and horror to pirates and pre-pubescents. If you’re a fan of Doctor Who, I’d especially recommend this to you. Sure, Fletcher Cross doesn’t have a companion, a screwdriver or a blue telephone box. But he’s got a cool chair and a nice lab coat. He also tends to cause a little more chaos than the Doctor, if that’s something you think is funny.

Fletcher Cross: The Multiverse Awaits‘s Kickstarter can be found here! Make sure to back this project before August 31st if you’re interested in giving this anthology a read. Foreign Press Comics deserves all the love and support for creating such a wonderful collection! If you want to support Foreign Press Comics and read more of their works, visit their website here.

What did you think of Fletcher Cross: The Multiverse Awaits? Did you back the Kickstarter yet? Let us know in the comments or send us your thoughts on Twitter!