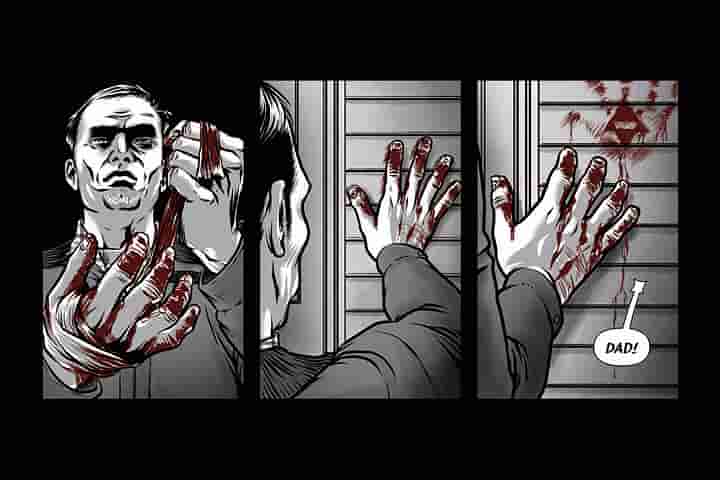 Forgotten Hymns #1 by Andrew Guilde, with art and letters by Isaac Perez and DC Hopkins, is quite an interesting piece. On the surface, it looks like a typical story of morals, politics, and the topic of how much money power can afford. Lillian Richmond is the daughter of Richmond Capitol president, Maxwell Richmond. She works to cover the tracks of her father’s sexual misdeeds. On paper, Maxwell has 20 victims of young teenage girls.

This is a very sensitive topic, especially considering the climate of today’s society. Even the reactions to the Maxwell investigation have some layer of truth to it; skepticism arise with people referring to victim testimonies as “hearsay”. There are even underhanded tactics used in the investigation; those involved euphemize their unethical methods such as “blackmail” to “calculated risk”. Forgotten Hymns also has a layer of mystery to it; it has the added presence of what seems to be a cult. Whether this will traverse into fantasy territory is yet to be seen.

The writing has some very interesting choices, with the equation of gods to a rich man; he is all-powerful and all-seeing thanks to money. There are also very deep questions of morals over blood. On the one hand, the daughter’s loyalty leads her to go to the extremes just to save her father. On the other hand, the sister is willing to expose her brother in order to bring justice to his victims. Throw in some sinister events of girls running wild and feeding on roadkill; we’ve got ourselves more than just your typical lesson in right and wrong.

Some lines on the actual comic strike a very novel-like effect. For example, “proof is a luxury not afforded to the poor” is very much an on-the-nose kind of statement. But there is something quite profound in its delivery, despite it being obvious. We also see clichés like the usual “say it out loud again so you hear how crazy it sounds” exposition. These don’t take away from the overall quality of the comic. But there is something off and unnatural about their presence.

Unlike most modern comics, Forgotten Hymns uses non-complicated page layouts, making it easy to read and follow. Monochrome beats with streaks of other colors – such as pale orange for the symbol on their back, or red for blood – add impact to every scene of note. Especially because it clashes with the well-uniformed and organized boxes of panels. However, the character designs at times can be quite confusing. While the shading is faultless, that and the color scheme makes it harder to tell the ages of the characters.

The inconsistent line details may be some sort of commentary on how rundown poverty can make a person be, that it ages them. But it’s impossible to tell because of the combination of techniques used. Color would be an easy indicator for age. However, in this specific instance, the only thing readers can take clues from are the clothes the characters wear. That’s not much help either. One big example are the scenes with Lexi and her dad. She’s 16 years old, yet side by side, they look more like husband and wife rather than father and daughter. It just takes a little bit of the immersion out of the graphic novel.

To conclude, Forgotten Hymns is curious to me. It has enough intrigue and realistic themes to keep interest high for any reader. In fact, for anyone new to comics, this might be a good starter read. There are some kinks, but not too much that it takes away from the overall enjoyment. With a lot of places to go, and plenty of moral questioning; #1 sets up a decent foundation for the rest of the series.

Ready for some moral dilemmas? Have a read at Forgotten Hymns #1. You can support it via its Kickstarter page where they’re funding for #2. If you like it and have any thoughts on what you would do if you were in Lillian’s position, let us know in the comments or send us a tweet on Twitter!