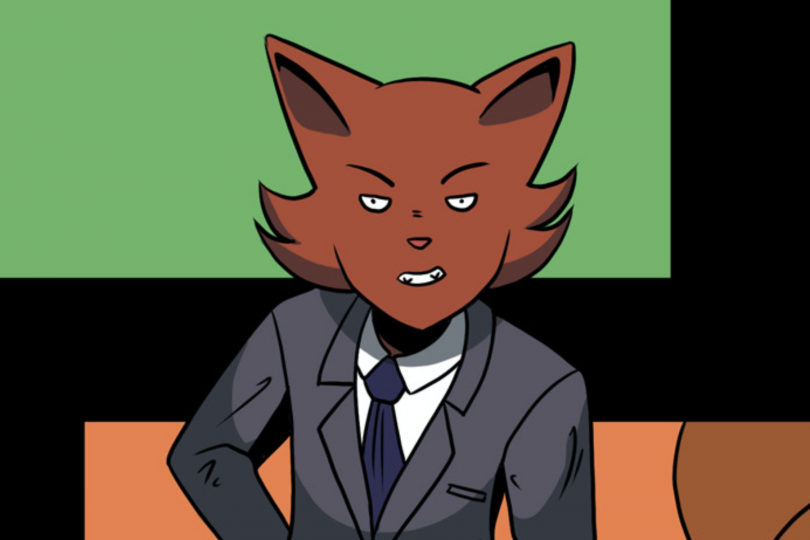 Luke Halsall and Chris Manson have really put themselves out there with their comic Mind Hacker. The story is messy and all over the place but it’s setting up something that could be fun and amazing. It has the potential to be hilarious, gripping, and worth picking up.

Mind Hacker revolves around Doctor Clive Eagles, a cat who transplants personalities but has to complete a five-day training course. The first issue/chapter/volume sets up the characters that I’m assuming will be series regulars by having them try to circumvent the training course for Dr. Eagles.

While the comic is setting up for the rest of the series, it seems to lack focus in exchange for setting up its sense of humor. While this isn’t a bad thing, it does feel like some gags are an extension of Halsall and Manson rather than gags that elevate the work. This is essentially how most opening chapters work from new writing teams, it’s just more noticeable with Mind Hacker. Though it does give a hint to possible storylines that the narrative wishes to go down. Which I think would be a great way to explore not just the characters but also the world.

The characters themselves are an interesting bunch. As already noted, Dr. Eagles is a cat with a mummy for a boss. There’s also Marisha, a 90-year-old woman that can keep partying like people in their 20s. As odd as this seemed, it this combination of characters made me feel like this could easily be pitched as an animated series. The outrageous mashup of characters that crossed genres is really helping the comic stand out.

The simplicity of the art is contrasted with the complexity of the world which may seem weird; it reminded me of Cartoon Network shows like Regular Show, The Grim Adventures of Billy & Mandy, and Adventure Time. That simple fact help shifted my entire view of this comic. Going back, I appreciated the wacky humor and risks taken. There is talent in the team and it may still need to find its balance but it does have a chance to be truly engaging as the series progresses.

If this kind of thing interests you, I would highly recommend checking out and supporting this Kickstarter. That being said, it is a risk for a potential narrative. While it is one of kind and nothing else out there; it has the potential to feel lackluster at its chance for a cheap gag. The series will need to learn to land those jokes to be truly entertaining. However, its cartoonish art style and humor combo might be ahead of its time.

I did enjoy reading this not because I found it thought-provoking but because it was mindless fun. Crossing genres for character concepts is nothing new but here it tries to take it to another level by breaking the fourth wall. Since comedy can be very hit or miss this is something I can admire. Mind Hackers takes a concept and fills it with outrageous characters that cross genres, creating a narrative that is more digestible than the countless other books (released by major publishers) on my shelf that attempt the same thing. This is a piece of work that has passion put in by the creators and will be a wonderful addition to their portfolio.

If you enjoyed the art I’d recommend checking out the artist, Chris Mason’s Website. He also does art streams on his Twitch channel. As for the writer Luke Halsall, you can find him on Twitter. Everything else related to Mind Hackers can be found on its Kickstarter.

Don’t forget to follow A Place to Hang Your Cape on Twitter for the latest reviews on indie comics!