Home » Stranded And Homebound In “AL15: The Adventure Begins” 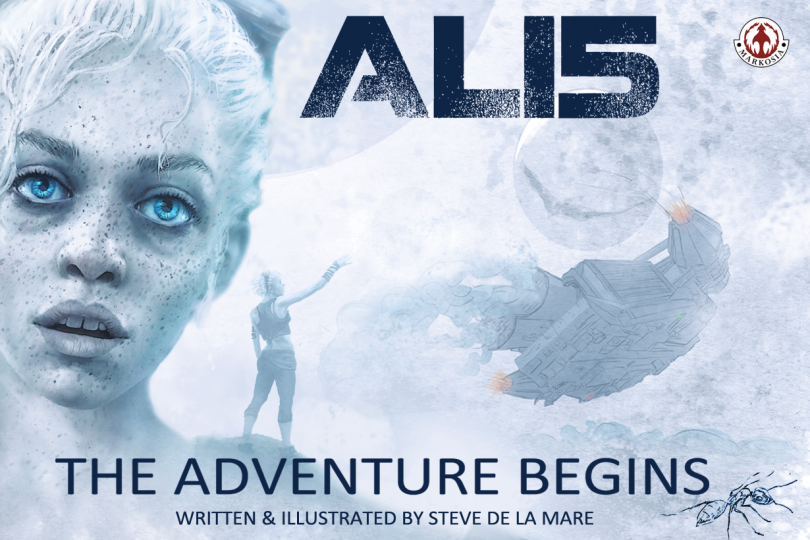 What’s worse than sneaking away from your planet in a stolen spacecraft? Crashing that spacecraft into the forbidden moon of Miror Terram, and becoming stranded. Nothing can be worse than that, don’t you think? Well, not quite! The moon you crash-landed into isn’t as deserted as you’ve been told; teeming with life that mostly think of you as a demon. That’s how the story of Andromeda Lewis 15th Generation – or AL15 for short – begins. Keep reading though; the action and excitement doesn’t end with the crash!

We join AL15 on a journey written and illustrated by Steve De La Mare. It starts out as finding a way home and culminates into a battle against the Evil Queen. Along the way, we meet a variety of strange characters that help AL15. Some are just a little bit more helpful than others. A hanging spaceman tells her she needs to get to The Grey Market; a large tiger rescues her from a plant that seems to be alive; The Gardeners heal her in their healing pools before throwing her down a well into a nest of dragons. Things are up and down for AL15.

Once we arrive at the Grey Market, we breathe a sigh of relief—she made it! All the fighting and bloodshed has been worth it, and she will be home soon! But, as we should know by now, nothing is ever that easy. After the hanging spaceman unexpectedly rescues her from a brawl, she learns of how life really is on this strange moon. People are just struggling to survive. Like her. It’s at this moment that AL15 decides she wants to stay; she wants to help the people of Miror Terram break free from the tyranny of the Evil Queen.

Something I particularly love about this graphic novel is how AL15 is almost a blank canvas. She has no clear, defining features and almost always blends into any background. De La Mare even states himself that “it [is] important to [him] that AL15 [is of] mixed-race appearance and [is] her own colour”. I think this is a unique and interesting way to present your main character. It allows the reader to project themselves into the character of AL15 easily.

The artwork is out-of-this-world amazing—see what I did there! The bright and vibrant blues and greens used throughout give me really strong Avatar vibes. The detailed plants and creatures really do make you feel like you are immersed on this strange planet. My favourite illustrations are the parallels between the demons in the legend and the reality of the crew of the Seven. It is such a subtle yet effective way to show us how history can be warped as it passes down through generations. It acts as a stark realisation that what we’ve been taught might not always be true.

The pages at the beginning and end of the novel really round out the whole experience. By adding in extra information about the history, the reader can go into the story feeling like they understand it better. Or, at least can try to understand what life is like for AL15. I also really like the blueprints at the end of the novel. Seeing the illustrations and characters from start to finish makes you appreciate the hard work De La Mare put into the graphic novel.

Overall, I think this comic is a fun and exhilarating journey. The world surrounding AL15 is complex and very well-developed. This gives the story more of an impact than I think it intends to have on the reader. We can really sympathise with AL15 and her need to have an adventure. While not too complicated in dialogue, I think it can sometimes be a bit cheesy and repetitive. It doesn’t take away from the enjoyment of the graphic novel though; I still find myself engrossed in the story right to the very end.

If you want to experience an action-packed, off-world space adventure, or you simply just want to know more about the graphic novel, then you can check it out at Markosia! Let us know what you thought of AL15: The Adventure Begins in the comments or send us your thoughts on Facebook or Twitter!