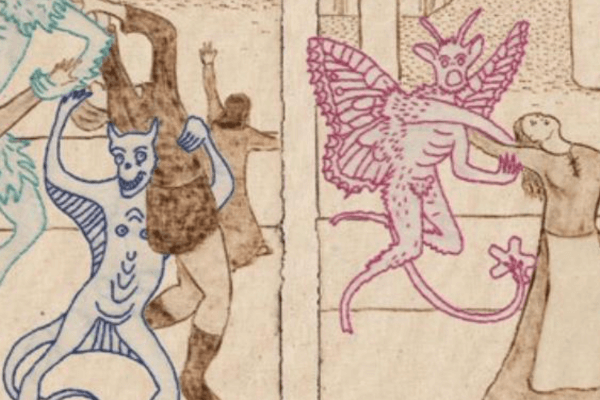 The Dancing Plague uses one of the most interesting phenomena that has happened in history. With it as a foundation, what may seem odd is actually quite a smart move. Author Gareth Brookes has mastered the use of textiles and press publishing. This makes the narrative feel like something straight out of the 16th century.

The story follows a woman named Mary; from her life as a child, to her time as a nun in the church, and even later on as a mother and wife. However, the titular epidemic only significantly affects her as a married woman. With the rest of her life showcasing the various other experiences she had prior. This may seem slightly odd. But these other parts of her life really round out her story by showing the many hardships she encounters throughout her lifetime.

Very nicely-paced, The Dancing Plague jumps back and forth between various points in Mary’s life. This paints a very clear picture of the time period. At no point does the story dwindle away for too long, making every chapter significant. Telling the story out of chronological order is an interesting choice. This really helps bring to light the extraordinary experiences of Mary’s life. Brookes tries to be vague in regards to the origin of said experiences; “are these messages from god or whispers from the devil”. Yet by the end, he gives no such definitive answer.

Creating a comic using mixed media isn’t anything new. But Brookes really takes it to a whole new place; incorporating his knowledge of textiles with printing adds depth to the storytelling. This is something I haven’t seen done before in this medium. Brookes doesn’t just use this without purpose. The fabric represents divine or demonic intervention. It may seem like an odd choice. But it truly works to make certain panels pop. It also helps add colour to the sepia-toned palette. He clearly wants to make it look 16th century-made, which just adds further to the effect.

This truly is a unique experience; I’ve never really read anything similar to it. Recommending it based on other popular comics out there is hard. But if you do have a fascination with history and all the weird things that come with it, then this is well worth picking up. Not just because it is quite a new read. But also because of the art style, and the use of mixed mediums. More than just about the dancing plague, it provides an entertaining story with creative use of textile in comics. I highly doubt you’ll find anything else like it!

Like a little bit of something niche in your comic collection? Give The Dancing Plague a try. You can check all its purchasing details over at SelfMadeHero. Also, make sure to check out Gareth Brookes via his website. If you like The Dancing Plague, tell us all about it on Twitter, or even via our Facebook page.