Home » “The Completed Frank at Home on the Farm”: In Conversation with Composer John Vallely 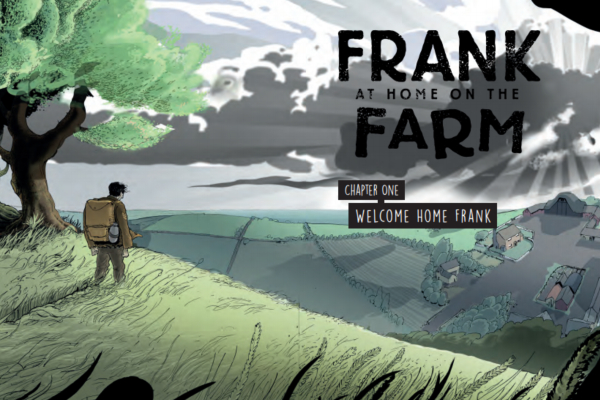 The critically-acclaimed horror graphic novel Frank at Home on the Farm, written by Jordan Thomas with artwork by Clark Bint, has returned in a new edition. The Completed Frank at Home on the Farm oversized hardcover edition has heightened the creepiness with new variant covers and a QR link to Frank: The Movie. The scored version of the graphic novel includes an original soundtrack composed by John Vallely. We caught up with the composer to find out more about his experience scoring this graphic novel.

AP2HYC: How did you begin scoring comics?

John Vallely: Well, I studied music composition at university and did a masters in composition at Queen’s Belfast. Years of vagabonding around Spain later, I found myself in Granada, where I met Jordan Thomas, the writer of Frank at Home on the Farm. In a bar one evening, we started discussing our future projects. He told me about this farm-based mystery he wanted to make into a comic and I was intrigued. I was telling him how I’d like to get more into the world of screen composition.

We talked away, drank lots of beers, ate lots of tapas and a few days later, he got in touch with the idea of putting music to one particular nightmare scene in the first edition of the comic. I was already interested from our conversation and then once I saw Clark’s artwork, it was a no-brainer. We did the scene, realized that there was a lot of potential there and decided to score all four editions completely!

AP2HYC: What does music add to the comic book experience?

Vallely: Well the biggest addition is a more rounded sensory experience. Music has a special capacity to really pull at one’s heartstrings. I really believe there is a lot of potential in comic scores. It is an art form that is still relatively unexplored. Music obviously has become a fundamental part of cinema but there are two qualities to a scored comic that make it unique.
One, there are no diegetic sounds (sounds that occur within the context of the film and can be heard by the characters: dialogue, the wind, a busy street, etc.

This means that a comic score has no sound competition, something that can be quite liberating for a composer. It opens new creative possibilities and kind of echoes the silent film era of the late nineteenth, early twentieth century.
And two, although there is movement in the scene transitions, the images are still. I think this can demand more imagination from the viewer than motion picture in that you must fill in the spaces between panels yourself.

Scoring comics, I try to stay faithful to the genre and not try to make it into something else. The music simply sets a pace to the events and guides the listener through the scenes. One big strength to this form of presenting a comic is the use of pans, zooms and scene transitions which can give a page a sense of scale, and also serve to hide events from the reader, and then surprise them in a certain moment. This is something that cannot be done on a printed page. I totally appreciate that many comic enthusiasts want to read their comic at their own pace. I wouldn’t consider this form of presenting a comic a replacement, I’d rather view it as an extra.

AP2HYC: What are the elements in a comic book that need to be considered when composing the soundtrack?

Vallely: I suppose there are many things that are similar to scoring a film: setting the mood, creating a build, a climax, a sense of closure. Then you have your style, genre, is it thematic, choice of instruments, etc.

Jordan wanted the Frank score to be orchestral and it is very thematic. There’s “the Home Theme”, “the Nightmare Theme”, “the Plotting Theme” and then of course “the Gangster Pig Theme”. There are 4 editions and over an hour of music there so I’ve had time to develop each of the themes quite a lot.

I try to compliment the images with the music and then also consider the part of the story that hasn’t yet been told by the images. In the final climax of the fourth edition for example, the music sets the pace and builds the tension, while following the images. But then pauses and suspends the moment, as we hear a final soft variant of the “Home Theme”. These musical moments can add more texture to the story that weren’t necessarily there before.

AP2HYC: Is there anything in particular about Frank at Home on the Farm that yielded itself to be scored?

Vallely: Absolutely! The sense of mystery that is so consistent throughout Frank that made it so much fun to score. The reader is really left guessing as to what is happening. There are lots of little funny moments but there is a very prominent underlying sense that something is very wrong.

I hadn’t actually read all four comics before scoring them. So when I was scoring edition 3, I had no idea what the ending was! This was cool as I got to feel the same sense of confusion and mystery that the reader feels and then score it accordingly.

AP2HYC: What was your experience collaborating with Jordan Thomas and Clark Bint?

Vallely: It’s been really amazing collaborating with them. They’re both super talented. It really helps you find inspiration for a musical idea when you are hooked on the story and genuinely impressed with what you are seeing.

Clark has done an incredible job with the art. In some scenes, he uses the gutter in intuitive ways to play with scene transitions. I then followed his lead with the pans and zooms. In other scenes, his use of light creates these really majestic moments, which completely influenced my choices for the music in those scenes. If you buy the comic, pay special attention to the shadows and reflections. There are lots of hidden details you could easily miss.

Vallely: Well they’re both comic scores but I don’t think these projects could be more different! Frank is mysterious and ominous and the scene I’ve scored for Tales from the Quarantine is this uplifting Italian mini-opera! It’s a really cool little scene drawn by Charlie Adlard. We’re actually recording the vocals this week. We have two incredible singers for it, Janet Shell and Christopher Goldsack. I’m very excited to see how it turns out!

AP2HYC: What’s next? Are there any projects you are currently working on?

Vallely: Yes! So The Complete Frank at Home on the Farm is on Kickstarter this month. Backers will also get the scored version. Tales from the Quarantine should hopefully be out next month. I’ve also contributed to another comic anthology called Xomic Bük, where myself and writer/artist Anthony DiPasquale have done a cool collaboration.

Apart from the comic stuff, I’m also working on some original compositions, which are a little more contemporary but still have a cinematic quality to them. I’m currently finishing off a piano score, which I hope to get published and performed soon.

Both old and new fans are certain to enjoy the sensory experience of Frank: The Movie as well as The Completed Frank at Home on the Farm edition. Be sure to check out the Kickstarter for more information. Sound off in the comments or send us your thoughts on Facebook or Twitter!