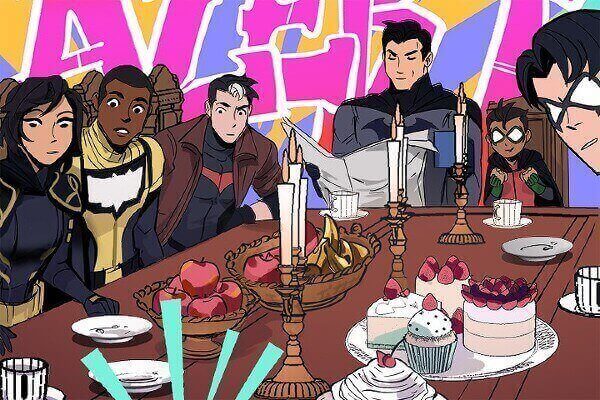 Mainstream comics can be a very tired and rundown scene, especially for us Batman fans. It’s just crime and violence, trauma and laughing clowns. While that might just be exactly what others are looking for, that’s not necessarily true for everyone. Sometimes, even I need an escape from my own form of escapism. And that’s where Batman: Wayne Family Adventures comes in.

Written by CRC Payne with ink and letters by Starbite and Kielamel Sibal, Wayne Family Adventures is a very surreal experience. It’s one many fans long for, but never actually think will ever exist. It has everything you can only ever hope to see in the mainline comics; family bonding, Bruce actually being a dad, the kids actually being kids, and estranged family members getting along with everyone else.

Right off the bat—pun absolutely intended—one of the things that really stands out to me are the character introductions. These are text boxes that summarize the characters when first introduced. If you’re reading this particular series, then you’re probably already familiar with all the different names. Many will think these little boxes may be unnecessary. I beg to differ. They’re fun and cute, and they make the comic all the more accessible.

Wayne Family Adventures allows others who may be less familiar with the family to read along. Acting as a gateway to mainstream comic for newcomers, these text boxes help those brand new to the comic scene get to know characters they may not have known of before. I know how daunting starting your comic journey can be, especially with that enormous reading list. This can provide those interested in getting into Batman comics a taste of the main vigilantes of Gotham.

It’s also very important to note that the comic acknowledges each and every bat family member. Even those outside of the usual circle. These include characters like Luke Fox, Barbara Gordon and Kate Kane. Well-balanced, the webcomic has lots of fun and sarcasm to offer. Bruce does a good job of being the dotting father with plenty of dad jokes to offer and exasperation over his children’s antics, while the Robins exhibit sibling banter in the best way possible—through wrestling each other.

All other dynamics are enjoyable as well; from Cassandra welcoming Duke, Damian’s unmerciful mischief, and the insurmountable love and respect for Alfred. They also don’t sidestep past the darker sides of the characters. Jason’s trauma over his death and resurrection has a brief mention. It even mentions how serious a simple crime like theft can affect Batman. All of these things in short bites called “episodes” always leave you wanting more.

But honestly, the best part about this is the art style and character designs. It bridges simplistic and anime, but maintains a very Western comic feel to it. I specifically love that it even incorporates the fan-favorite white streak of hair on Jason Todd. More importantly, it’s the way that it pays attention to character details. Damian Wayne’s skin color and facial structure are often times white-washed. He is of Asian descent after all; even mainstream DC comics and films seem to forget that. Here, his skin is of a darker shade and his eyes are sharper.

However, aside from Damian, the three other Robins look very much identical to one another. I understand it’s the mark of the art style. But sometimes, it’s hard to distinguish the difference between Jason, Tim and Dick—even with the color-coded clothing and Jason’s white streak. Even Bruce looks like an older version of all of them. It’s odd because the women each have their own signature mark.

Cassandra with her cat-like eyes, Barbara and her sharp jawline and fluttery lashes, and even Stephanie who’s only been seen in a few panels is distinguished by the framing of her bangs to her face. Meanwhile, the male Robins all have the same hairstyle and facial structure for the most part. Luckily, even without the intricate details on costumes and clothing, each character’s individual style showcases a lot of personality.

Wayne Family Adventures has a lot to offer. If you’re tired of too much angst and not enough family bonding, this might just be what you need. It’s got funny little pop culture references, including the double Spider-Man meme (who says you can’t crossover Marvel with DC). There are secret identity shenanigans, and twisting of drama and comedy. So kickback, and read as the Bat clan fight over the last piece of Alfred’s infamous cookie. Domestic enough for you?

Need a break from the daunting world of mainstream comic? Just want a fun little read with your favorite characters from the Bat clan? Batman: Wayne Family Adventures is available on Webtoons, with new episodes out every Thursday. Talk to us all about it down in the comments or on our Twitter!