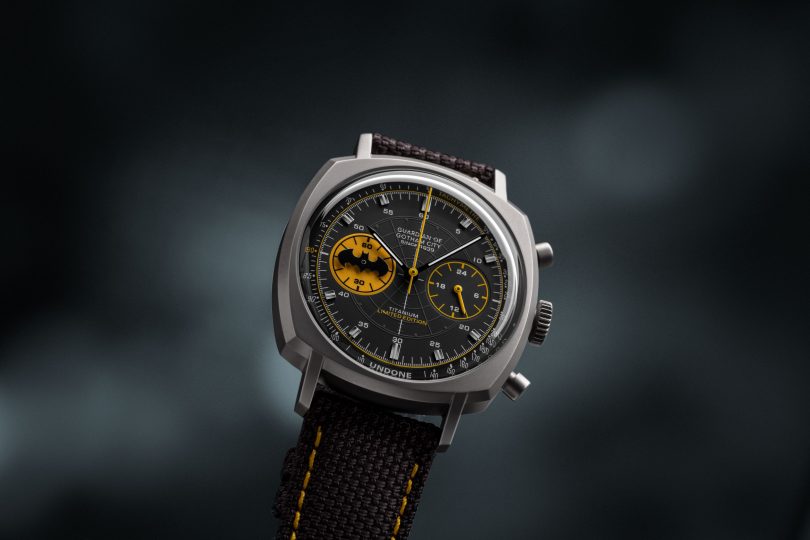 If you’re a fan of Batman (and let’s be honest, who isn’t these days?) and you like cool watches, then you’ll love the Caped Crusader from UNDONE’s Gotham Series.

I was so excited when UNDONE approached me to write a post and receive a free product! Now, I should mention I’ve never written a review of a watch, and I found the idea a bit daunting. So I spent a month wearing the watch to really get to know it.

For starters, the watch is very comfortable and I got lots of compliments when I was wearing it. It’s quite light and the band is made of a nice, black fabric. I also love the clear back where you can see the gears (and the back also has a sweet sticker celebrating the 80th anniversary of Batman).

The watch isn’t the most comfortable to sleep with, but I wouldn’t say this is necessarily a negative. I have only ever slept with watches that have sleep trackers in them; so gave this one a go in the spirit of the review. The glow-in-the-dark feature isn’t bright enough to negatively affect sleep if that’s a concern. In fact, some may find it fine to sleep with.

So despite the watch being touted as being waterproof, I wasn’t brave enough to put this to the test. Partly because I was worried about the water affecting the band; I have showered/gone swimming with similar bands and found they tend to degrade faster when they get wet. The good news is that the band is quite easy to take off and replace, so if I can find a waterproof band that fits, I would probably just keep it on. I also didn’t work out with it on, partly because of concerns about sweat on the band, and also because I didn’t want to risk damage.

That said, the watch was definitely pushed to the limits of its durability by my toddler. Suffice to say, he got his hands on it and I was relieved to find that it survived a rather lengthy crime-fighting adventure unscathed. Other accidental bumps and knocks left no visible signs on either the glass face nor the titanium casing. One month later and it still looks fresh out of the box.

The main special feature on the watch is the one-hour timer, shaped like the Bat-Signal as the left dial. I love the look of it, and after a few days of experimenting, found it surprisingly useful. It’s very easy to know if it’s been an hour by whether the second hand is still moving. It can also be handy to glance at the Bat-Ears to see how much time is elapsed. I would often set it to start an hour before an appointment so that I could easily see how much time I had left. Other times I would just set it to go because I liked having the second-hand running and the way the Bat-Signal spins back into place when stopped.

The right dial is a 24-hour clock, which to be honest I’ve never found particularly useful on an analogue watch. I would have much preferred a calendar, but it’s a small complaint overall.

Ultimately, I think this is a great watch for those interested in Batman collector’s items. If you want to get your hands on one, head over to UNDONE and use the discount code AP2HYC8 for 8% off your purchase.