Home » “Hop Dude” Searches For The Meaning Of Life 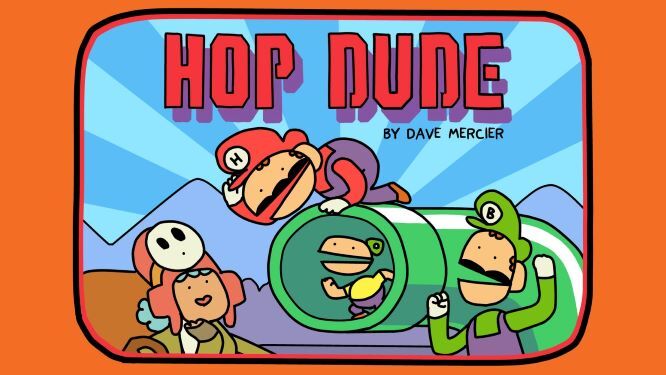 Hop Dude: Pasta and Existentialism by Dave Mercier is a slice of life story starring a very normal guy. Hop Dude does DIY, hangs out with friends, loves his brother – but does not get him most of the time. He falls in love too and goes through many a heartache throughout the whole narrative development. He likes spaghetti, so much so that he adopts an abandoned baby and names her “Spaghetti”. What is life? It certainly feels as if the title character might suddenly break the fourth wall and talk to the readers.

To be honest, the comic may appear pretty simple at first. Even I had the impression I was about to read a Mario Bros. parody. But apart from the characters’ resemblance – along with some plot devices shared with the super popular plumber hero – Hop Dude is a reminder that art for art’s sake is a notion that should be challenged continuously. I advise readers not to overindulge in the optical temptation of the basic lines, minimalist drawings, and shiny flats; colours courtesy of Sam Kehoe. Instead, I would recommend stepping into this story slowly. Read a few pages a day and savour them. Get the feel of the narrative—which is definitely more than just a collection of events.

The comic (three hundred pages in length, including a short biography of the author), consists of three main parts. This is then followed by an epilogue. All of these pieces are fundamental to understanding the LA-based author’s message. At the beginning, the development is gradual. Equally, the main characters are introduced with a relaxed pace. This provides readers enough time to endear themselves to the many different personalities present. By the end of ‘Part 1: Existence’, you will have met all of the characters. With ‘Part 2: Growth’, the reading pace gains speed as the events unfold with more action.

‘Part 3: Reality’ immerses the reader in a meta-cinematographic plot twist. With that, Hop Dude’s quest for the meaning of life becomes more intense. He faces a lot of challenges throughout the various levels, while progressing from one world to the next. These are the real keystone in the character’s arc. They are fully revelatory of what Mercier, in my opinion, wants to convey. In the ‘Epilogue’, the reader finally gets acquainted with the sweetness of the main characters, and of what is important in life.

The subsequent chapters (‘The Meatball of Invisibility’, ‘The Devil Wears Pesto’ and ‘The Jazz Stranger’) are standalone brief stories. They are cleverly crafted in the fashion of a spin-off with the feel of 1930’s pulp literature. This adds hues of toned-down yellow, brown and sepia to the colour palette. These give a generous vintage touch to the stories. Finally, Mercier concludes with ‘The Comic Machine’. This is one last tracking shot through funny extra content. Which in turn works as a reminder of his philosophy: nothing should be taken too seriously.

Once you are familiar with the style and the contents, I have the feeling that like me, you may want to read this nicely-crafted comic more than once. I think this will enhance the experience of seeing the author’s work in all its various aspects. There is an entire world that comes to life beyond the immediacy of the comic’s structure. Certainly, with a well-calibrated blend of different genres (comedy, drama, action, thriller, to name a few), Hop Dude strikes for its leading theme: introspection.

In certain parts, I have the impression that I am reading a Zen meditation guide. Not one written in the fashion of a self-help manual. Rather, I get the feeling that Mercier is critical of that type of literature. See for example “Zen” on p.13 or “Easy” on p.26. Mercier’s philosophy may also be drawn from the original, pre–New Age era. There are crumbs of 1960’s culture influence in this particular work. The colour choice; some passages clearly linked to that era’s relationship with psychedelia; throughout the story, there is a semblance of connections to the Beat Generation’s philosophy.

Furthermore, Mercier appears critical of the line of thought which considers only art cultivated in academic environments. See for example “Bad”, p.27 (what is good or bad, after all?). While immersing yourself in the tiny details of the pages, you may catch sight of numerous references to pop culture in general. You may also find a couple of special guests featured. One can be found in the main story, the other is in one of the spin-offs. They come in as a surprise, and at a time, come charged with great comedic effect.

Hop Dude jumps right into the centre of the readers’ imagination. It shakes their world with the sole strength of their humanity. Mercier, from the very beginning, coaxes the reader into familiar territory. And almost immediately, he shreds the resemblances of what might feel like a mere spoof to bits. Thus, leaving space for Hop Dude’s natural evolution who slowly comes to terms with what reality is. He does this with popping effervescence, and very humanly follows the quite common trial and error process. As real people do.

Indeed, underneath a patina of shiny colour palette, the apparent stripped-down drawings, and a three-tiered layout (for a total of six panels per page), the author guides the reader throughout a particularly important message. That is to say, individuals should think with their own head. They should also look inwards to find their own key to life and to what is out there in the world. It is up to them to decide what to make of it. Exactly like Hop Dude has found balance in his own world—”Mama Mia!”

Would you like to know more about the meaning of life according to Hop Dude? You can take a look here if you’re interested in reading more. Don’t forget to let us know if you enjoy it by commenting down below or send us your thoughts on Facebook or Twitter!