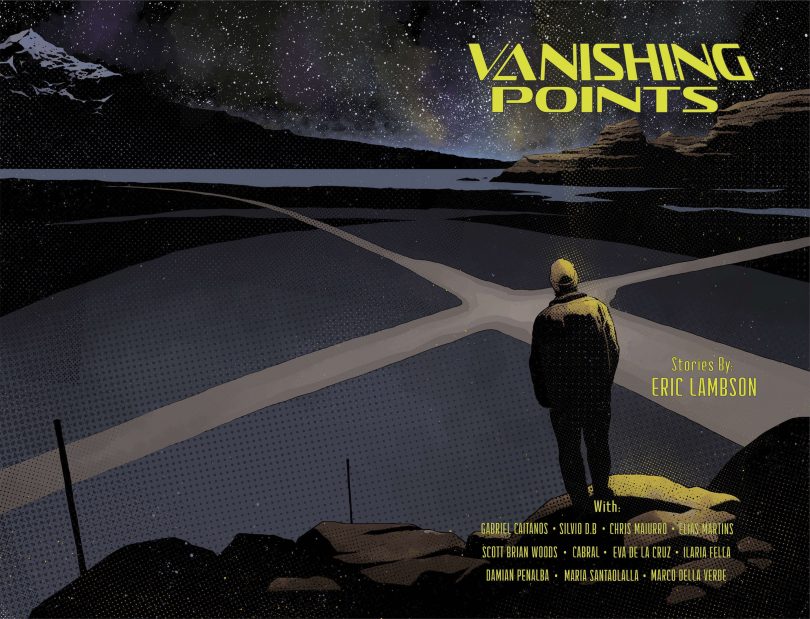 Originality is an extremely difficult outcome in any work of art. Today, the concept of originality is a near-impossible achievement (though it’s not always an achievement). However, contrary to popular belief, originality is not a “must” that every artist should achieve. It is okay to have a story or concept that’s been done before. What is indeed a “must” is to have one single trait about this piece of art that is original. And that is what Eric Lambson did in his newly released comic book Vanishing Points.

Vanishing Points is an anthology revolving around eight separate stories. Each one has a different plot and characters but share the same theme. The main theme revolves around gaining new perspectives through critical moments in our lives. And here is where Lambson put his original print on the book; that is the trait that makes this comic book fresh and unique.

Be it losing faith in oneself, your family, and friends, losing a loved one, or having to deal with someone/something you don’t want to. All of these pivotal moments in life are sources of perspective. In moments of adversity, we all must make a decision that dictates the outcome of our circumstances. And it could be a turning point in our lives.

We don’t necessarily know the character’s backstory or main circumstances. We do, however, understand their current predicaments and objectives. Lambson doesn’t waste time giving information that is not that necessary to understanding the story, and even though this is a good thing, it also poses some questions.

The reason why Lambson jumps straight to the climax of the story is simply to not waste time. Lambson focuses on the message and theme of the story rather than the plot development, and there’s nothing wrong with that. Giving the book a unique rhythm and maintaining the flow of the book.

The reason why that could be a negative, however, is that it can affect the integrity of the plot. We may understand the characters’ objectives. We may understand the reasoning behind their decisions. But we may not necessarily relate to them. Readers need to find that element in each story to relate to, emotionally or intellectually; it’s the essential hook.

Not delving deeper into the story made Lambson use exposition more in the comic book, leading to generic and cheesy dialogue at times. But, let’s be real here, we all need a little bit of cheese in our lives. I found this style to be mysterious, leaving it to the reader to create a backstory for each character.

Having a character tell the reader (indirectly) the why’s and what’s of the story can break the flow at times and be a turn-off for some. Sometimes allowing the reader to reach a conclusion on their own can give them a sense of accomplishment and satisfaction.

Another home run in Vanishing Points is the artwork. The artists include Gabriel Caitano, Silvio D.B, Chris Maiurro, Elias Martins, and Scott Brian Woods, with colors by Cabral, Eva De La Cruz, Ilaria Fella, Damian Peñalba, Maria Santaolalla, and letters done by Marco Della Verde. The art is vivid and engaging! The color palette serves each story and the theme of each story. Lambson and his team produced a visually scintillating and beautiful comic book.

Each story has a specific color palette, but there is a pattern in the way color is utilized. In a feud between two characters, we see the use of contrasting colors such as blue and yellow. Making it clear these characters oppose each other. In moments of joy and memories, the use of the colors green and yellow mix perfectly to guide the reader that this is, in fact, a memory, followed by grey and blue scenes that resemble the current gloomy times. Lambson and his team of colorists use colors to boost the stories and plots.

In every comic book, there is a line that each writer needs to play carefully: the balance between action and drama, and Eric Lambson plays that line excellently. Vanishing Points has the sci-fi, the realism, the adventure, the imaginary, the mundane, and the historic. All these settings create balance in the comic book, which every comic book needs to have.

Vanishing Points conveys heartfelt themes that anyone can relate to, and that’s its biggest strength. Eric Lambson pours his heart and soul into the comic book, and it shows, and it is brilliant. You can find it on Kickstarter, a comic book worth the read, leaving you contemplating your sources of perspective.