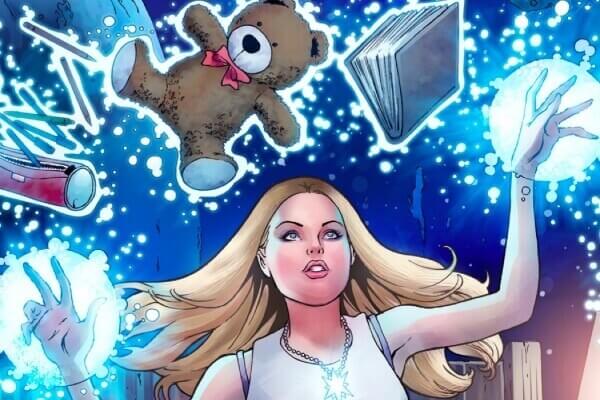 Star Runner Chronicles: Fallen Star seems to be – at first glance – like a fairly familiar story. In some ways, it is—presenting us with a lot of things. Misunderstood teen with a mysterious past and special abilities, check; a dreamy love interest, check; a villainous corporate scheme, hell yeah—check! But what looks like a Superman-esque origin story about a powerful child from the stars goes beyond just a simple restructuring. It has strong and well-realized characters, and a bit more of a science fiction focus. Fallen Star is an engaging and uplifting story of friendship and self-acceptance. It’s something that’s so well worth a read!

Written by James Watson, Fallen Star first introduces us to seventeen-year old Aurora, and the county of Canahoga Falls. Aurora is a foster kid; she is starting her first day back at a new high school in the town she grew up in. In the midst of her struggles with fitting in, things begin to get even stranger than usual for her. Weird things start to happen such as Madison High, Canahoga Falls, and Aurora herself all having connections to the stars. Likewise, parts of Aurora’s past are literally and figuratively unearthed; suddenly, she finds herself with new abilities, new friends, and even some new enemies.

The characters are what really sets this origin story apart; most of my first impressions about them end up barely scratching the surface. For instance, in just the first pages of what seems to be a grander story for Aurora going forward, the narrative is already beginning to explore her relationship with her newfound powers in ways you might not expect. In fact, I am pleasantly surprised by the way the story handles her introspection. Things like her reaction to danger; what her powers poses to the people around her; the good she can do as she comes to better understand her own abilities.

Aurora’s new best friend Kristine also subverts the typical “gossipy cheerleader rival” trope. Firstly, she is more of an asset to Aurora. More specifically, her genuine friendship and intelligence as an aspiring scientist leads her to becoming an important part of Aurora’s story. The same goes for Scott. He’s a boy who sticks up for Aurora and truly makes an effort to connect with her. He even goes onto stand by her even through her darkest points. Fallen Star really just takes simple and familiar concepts, really making them work for its own characters.

Aurora is a well fleshed-out and interesting protagonist. It’s not just because her circumstances are particularly unique in the canon of comic books. Her actions and emotions themselves are engaging and compelling, as are the relationships she develops; it’s how the positive nature of those around her impact her for the better. I think it’s a mark of really good storytelling; a story that hits a lot of familiar origin story beats yet still manages to entertain and surprise. Such a promising start! It makes me very excited to see what James Watson and company have in store for the rest of the greater Star Runner Chronicles universe.

Did you have fun with this small piece of the Star Runner Chronicles series? Eager for more? In that case, Star Runner Chronicles: Fallen Star is now available at Comixology if you have yet to read it! What are some of your favorite origin stories? Sound off in the comments or send us your thoughts on Instagram or Twitter!