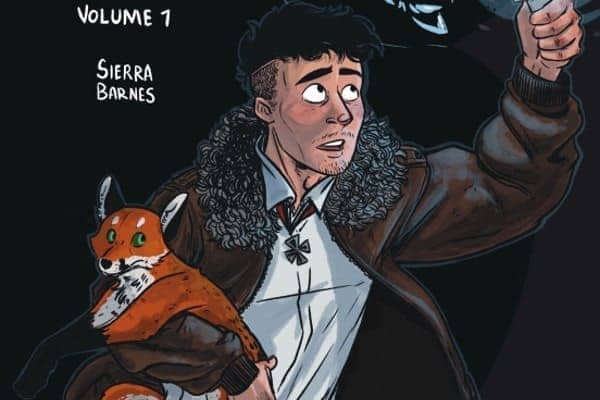 Hans Vogel is Dead by Sierra Barnes is a fascinating fairy tale about second chances and the role of everyday individuals in a fascist regime. Barnes has a background in history and an interest in folklore, which is reflected in her work. Hans Vogel takes place during World War II, and the comic includes intriguing historical details alongside the fairy tales.

Although the Kickstarter campaign is coming to an end this week, we had the opportunity to talk with Barnes and learn more about Hans Vogel is Dead.

AP2HYC: How did you begin writing comics?

Sierra Barnes: I have been both drawing and telling stories as long as I can remember, though it didn’t really occur to me that I could combine those two until embarrassingly recently. I spent most of my childhood writing prose novels, up through undergrad I thought I was going to be a novelist and had actually pitched a few manuscripts around to agents (none of them ever went anywhere, probably thankfully as I’m sure they were not my best work). I actually started writing/drawing Hans Vogel in high school, but gave up on it when I went to University and realized it would take a lot more work than I was ready for at the time.

Fortunately, I was able to come back to it after university and a year abroad, and that gave me a lot of time to build up both my art and writing chops and give it a whirl! The realization that I didn’t have to be perfect to start a webcomic was 100% the reason I was finally able to get Hans Vogel started in earnest: it helped me get the confidence to try out a weird story and figure out the process as it went rather than waffling around forever waiting to be perfect.

AP2HYC: What was the inspiration behind the comic Hans Vogel is Dead?

Barnes: A lot of things: my undergraduate research into World War histories, my reading of postwar and interwar German literature like Die Blechtrommel/The Tin Drum, Krabat/The Satanic Mill, and Vergeltung/Payback, my love of folklore, being allowed to read Tintin and Asterix and Obelix as a kid, and I’d like to think my passion for history and the people in it.

I feel like a lot of World War II media—especially in America—glosses over a lot of aspects of how and why Fascism appeals to people, and subsequently fails to understand and successfully teach people about it. With Hans Vogel, I wanted to show how someone (dare I say) “ordinary” could end up being part of an evil movement, and, using folklore as a framing device, dissect its parts and hopefully let people recognize and reject it “out in the wild”, as it were.

AP2HYC: What can you tell us about the protagonist and his story?

Barnes: Hans Vogel is a pilot in the German Luftwaffe during the Battle of Britain with an impressive war record and a less-than-impressive personality of anxiety, self-doubt, and an unquestioning obedience to whomever’s in front of him. Born on Armistice Day, 1918, Hans grew up on the mean streets of 1920s Berlin in the depths of the economic collapse and Fascist takeover, and struggled to find himself in a world of violent revolution and competing political ideologies. He never really succeeded. Molded by the state, his First World War veteran father, and his own desire to keep his head down and take the path of least resistance, Hans stumbled into war, pain, and, eventually, his own death in 1940.

Unfortunately for him, his death is just the start of his problems. Carried out of his world by the Valkyrie Brynhildr, Hans finds himself not in Valhalla but the mysterious Märchenwald, the world of the fairy-tales. Märchenwald has been transformed by the war Hans left behind and taken over by the malevolent Erlking, a monster who uses the power of stories to trap and manipulate people. Stripped of everything he was and forced to confront the consequences of the evil he served, Hans finds himself faced with a new choice: give into the same evil a second time around, or try and make things right. 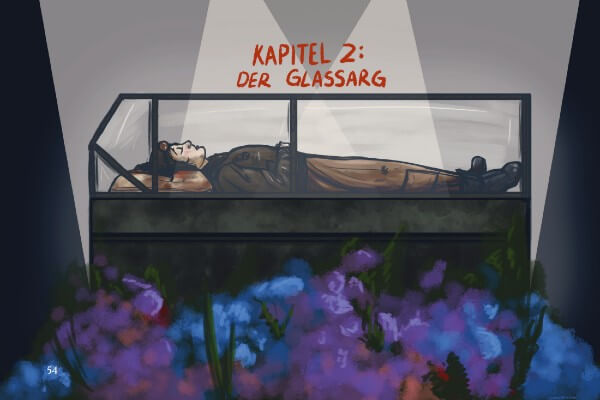 AP2HYC: What style of art would you say the comic has, and why did you want to give it that style?

Barnes: Over the course of making a webcomic, I’ve learned that the best style is the one that you can get out a page a week in. I’m still struggling with that. The style I use for Hans Vogel is Dead is constantly evolving as I learn new tricks to try and make each page as visually appealing, legible, and on-time as I can!

AP2HYC: You include historical notes throughout the comic. Why did you decide to do so, and what was the research process like?

Barnes: I was talking with a friend early in the development about my research for the comic, and specifically about Pervitin, the brand name for meth in Nazi Germany that was given to fighter pilots and plays a part in Hans Vogel. My friend had never heard of this before, and suggested that I include at least sources in case people wanted to learn more—and because webcomics allow all kinds of fun little notations and comments, I was able to add research notes and whatnot. I greatly enjoy research and find little details interesting when other historical fiction writers include their inspiration and sources, so I thought it would be a nice thing to include that hopefully other people might find interesting!

The process of research is one that continues basically up until I post the final pages: from visual elements (“what DOES a 1940s German torch look like?”) to thematic, story-building points (“If Hans was born in 1918, what world events would have shaped his life?”), there’s always interesting stuff to find and use to build stories from.

AP2HYC: Hans Vogel is Dead intertwines fairy tales with historical fiction. Was it difficult to draw parallels between the Brothers Grimm’s fairy tales and the historical timeframe that the story takes place in?

Barnes: There is a long tradition in German literature of using fairy tales and their imagery to process the trauma of World War II: Günter Grass, Otfried Preußler, and Gert Ledig being my personal favorites (and perhaps the most famous examples). There is something about the magical absurdity of the fairytale world, its inconsistent rules and sometimes startling cruelty, that I think maps very well onto a war that people are still struggling to fully wrap their heads around.

Fairy tales have this dual power of both hearkening the innocence of childhood while also having some pretty graphic content, and that juxtaposition has a lot of power that these postwar German writers used very effectively and I try and emulate. I also find that the kitsch that the Nazis made very effective use of often directly pulls from these fairy tales, so in many cases, there’s not really much work I need to do in making the WWII-fairy tale connection.

AP2HYC: What are the central themes in the comic?

Barnes: I am obsessed with the relationship between individual memory, narrative, and “history” as an absolute concept. While all of these things are supposed to overlap perfectly, there’s lots of weird little corners that poke out that I like to explore. Sometimes memory fails and gets replaced by established narratives (there was a whole study done on Soviet WWII vets who, over time, were found to have replaced their more traumatic war memories with those from popular movies as perhaps a way of coping), sometimes individual experiences become narratives (“inspired by true events!”), and sometimes what we all agree collectively “happened” is too simplified an explanation as to be useless.

Hans isn’t in WWII anymore—he’s dead, he’s looking back on his experiences and reflecting on them, and he’s got to wrestle with not only what he’s done but also how he’s going to move forward from that and be a better person. It’s about rejecting fascism as a political movement but also as a media style, as a way of looking at history, and as a way of thinking.

Barnes: At the moment, Hans Vogel is my big project! I have two more volumes planned for it currently, and Volume 2 has already begun updating on the website as we’re working on getting Volume 1 out and in the world. I’ve got a few other projects in the works that I can’t talk much about, but I’m very excited about them and hopefully will be able to announce more about them soon. Safe to say, there will be more history-inspired projects coming soon!

Hans Vogel is Dead is perfect for history buffs and fairy tale lovers alike. With only a few days to go, be sure to check out the Kickstarter for more information! Sound off in the comments, or send us your thoughts on Facebook or Twitter.