Home » “Where No One Goes”: Understand Your Past And Find Yourself 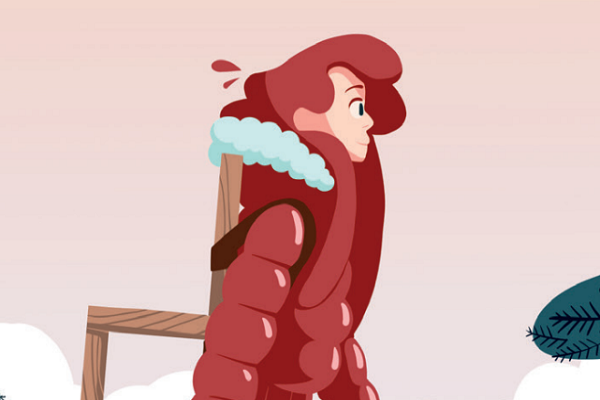 Your memories are unique. Chances are, no one has experienced the world the same way you have. What if you could share your memories with someone? In “Where No One Goes”, Marlo lets her new date into her head to experience her memories in a show of ultimate vulnerability. We get to see what makes Marlo tick, from her time rooming with a skeleton girl to her misadventure with a flaming monkey. The series is currently three volumes long, though the fourth and final volume is set to release soon. Very minor spoilers ahead! I’d really recommend giving this series a try if you haven’t already.

So far, “Where No One Goes” contains three issues. All three could be read independently of each other, but I’d still recommend reading them in order to experience the full charm. The second and third issues, titled “Where No One Lives” and “Where No One Grows” respectively, expand off of memories showcased in the first issue, “Where No One Goes”. Each issue is fairly short, coming in at under thirty pages each. Every single issue focuses on Marlo, with the date acting as an outside observer in “Where No One Goes”. Both characters are quite fun, and it’s nice seeing how well they contrast each other, but still respect each other. The other two big characters, the flaming monkey and the skeleton girl, provide a lot of insight into Marlo’s character and how they influenced the person she became.

Written and illustrated by Zorika Gaeta, the series has a lot to love about it. One of the immediate standouts is the bubbly and vibrant art style. There’s color everywhere, and it breathes life into an already imaginative and lively story. The characters all felt alive, and I loved how expressive they all were – minus the skeleton girl, who couldn’t exactly be expressive for obvious reasons. Even then, the skeleton girl’s lack of immediate expression was an outstanding choice that balanced out Marlo’s liveliness. There’s also a certain aspect of this series that feels personal and relatable. Sure, you may not have befriended a flaming monkey in your lifetime, but I bet you’ve broken off friendships before. If you’ve befriended a flaming monkey before, though, that’s awesome. Hook me up with one o’ those little guys.

What is Marlo’s Story?

Though Marlo’s memories feature some eccentric characters, they clearly act as metaphors for actual events and people in her life. The flaming monkey represents a passionate friend she let go of. The skeleton girl was another friend who was painfully normal and uninteresting, though she provided Marlo with a place to stay. And the sloth, who only shows up in “Where No One Goes”, symbolizes a lover who abandoned her. Though the characters Marlo interacts with and the places she travels aren’t inherently based in reality, they represent very real events from her past.

But since the series isn’t in chronological order, it means we’ve got to piece together Marlo’s full story. From how I understood it, Volume 2 comes first in Marlo’s timeline, followed by Volume 3 and ending with Volume 1, the present day. Volume 2 features Marlo wishing for something more and venturing off to find her own way in life. Then, in Volume 3, she ends up moving past her friendship with the flaming monkey, but not before the monkey “burns” her – her hair changes from a light brown to a bright red, which she still has in the present day. Her hair’s an example of how her memories have impacted her in the waking world, which I think is just as important to acknowledge as her opening up to her date.

Predictions For “No One Else” and Final Thoughts

Like I said earlier, “Where No One Goes” still has one final issue left in the series. “No One Else” doesn’t have a set release yet, but its Kickstarter page is up and running! Based on the cover art, it looks like we’ll be taking a look into the date’s mind and memories. I really love this change in narrative, because right now, we’ve only experienced Marlo’s memories. While Marlo’s clearly the main character and deserves the spotlight, showcasing the date’s vulnerabilities would heighten the stakes. It’d show that these two truly love each other and are comfortable in each others’ presence, which is a huge step forward for their relationship. But what kind of memories does the date have? Are they nearly as special as Marlo’s, or do they contrast hers with their simplicity?

Overall, I think “Where No One Goes” is a fantastical series about the memories that form us, and how exposing those to someone is the ultimate exercise in trust. I’m really looking forward to “No One Else”! If you’re looking for an atmospheric, slice-of-life journey through memories, I’d definitely recommend this series. Just be wary of flaming monkeys. Also, don’t trust sloths.

Volumes 1 and 2 are available on Etsy and Gumroad, as well as Webtoon. Zorika’s Etsy shop is the only location that has Volume 3, so if you’re looking to read the full series, I’d recommend checking that out first. Plus, it’s got some cute sticker sheets and art commissions available! Volume 4’s Kickstarter is also up, if you want to be notified about its release and pledge for it.

What did you think of “Where No One Goes”? Are you excited for “No One Else”? Let us know in the comments or send us your thoughts on Twitter!